To the Home of Feta

This definitive Greek cheese is made all over the world these days—but its soul is in the Peloponnisos. 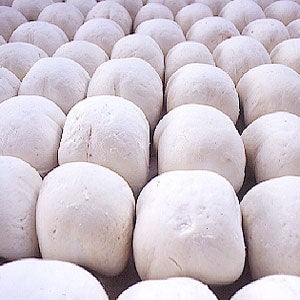 Everything is damp at Takis Langas’s cheese factory on the cool mountain plateau of Mandinia, deep in the Peloponnisos region of southern Greece—one of about 800 small, family-run, traditional-style cheese concerns left in the country. The strange, thick, sweet-and-sour smell of fermenting milk permeates the place. Hoses carrying milk and whey snake across the wet cement floors. Salt cracks beneath your feet as you walk around. Balls of myzithra—an air-dried whey cheese made with feta residualswith feta residuals—dangle like Christmas ornaments from the rafters. There are barrels everywhere—empty ones piled in pyramids outside, new ones being washed out with whey, barrels filled with feta at various stages of maturity, barrels deconstructed into tired staves destined for the wood-burning oven that Langas lights once a week to cook his famed roast pork “for the boys”.

Feta, the definitive Greek cheese, salty and sourish and earthy, is descended from the soft, tart goat’s-milk cheeses that have been known in the Balkans, and especially in Greece and Bulgaria, forever. The Greek word feta means “slice”—the form in which the cheese is customarily served. It is not an old name; it was probably coined by a market-savvy cheese-monger or producer around the turn of the century.

Greek law decrees that feta must be made from at least 70 percent ewe’s milk and up to 30 percent goat’s milk. Each animal produces one to three kilos of milk per day; it takes at least four kilos to make a kilo of cheese. The more goat’s milk in the mix, the firmer the cheese will be. (Bulgarian feta is traditionally made with about the same ratio of ewe’s milk to goat’s milk, but cow’s milk is sometimes added today because the country faces an overall milk shortage.)

Feta of one kind or another is made in many European countries and in North America. Bulgarian feta can be excellent—though it is quite sour and tangy because of the local yeast used as a starter. There are also good ones from Sardinia (a Greek-style, barrel-aged version), where many of the cheesemakers are expatriate Greeks, and from France—a wonderful, creamy feta made, ironically, in Roquefort. The Danes, the Dutch, and the Germans make generally dismal versions of feta, mostly from cow’s milk; these are typically chalky, and squeaky in the mouth. American and Canadian feta is usually sold at half the price of the rest—and with good reason. Non-Greek European feta is about to become a thing of the past, though—at least by that name. According to a recent European Economic Community ruling, after July 21, 2001, no member nation will be able to sell white brine cheese—either inside the European Community or anywhere else—as feta. Names like “white cheese” or “white brine cheese” (or their equivalents in the local language) are suggested alternatives—though the marketing departments of the major European cheese producers will doubtless come up with more evocative terminology.

According to Eric Moscahlaidis, the president of Krinos Foods, the largest importer of Greek food products in America, feta is the fastest-growing specialty cheese in the United States. It was first imported to this country in the 1930s, but for years it was sold only in ethnic markets. Exports from Greece stopped during World War II and the ensuing Greek Civil War. During the latter conflict, says John Moscahlaidis—Eric’s father—who founded Krinos Foods in 1956, many Greek cheesemakers moved to Sardinia “because that’s where they found sheep.” A few entrepreneurs even tried producing fetalike cheeses in the U.S.—one marketed under the very weird name Cream-O-Gal. The elder Moscahlaidis credits the award-winning 1964 film _Zorba the Greek _and the marriage of Jacqueline Kennedy to Aristotle Onassis with spurring American interest in Greek foods—feta included. The many Greek-owned coffee shops and diners along the eastern seaboard helped, too. Today, with the American mania for all things Mediterranean, it’s only natural that the cheese (which, incidentally, is lower in fat than most other firm cheeses) should be more popular than ever.

he Langas factory turns out about 250 tons of handmade feta each year, between December and the end of June. Production is supervised by a wiry Ionian named Gerasimos Theodoratos, who learned the cheesemaker’s craft from his father and grandfather on his native island of Cephalonia—long famous for its cheeses—then made feta in the U.S., Canada, and Sardinia for decades before returning to Greece.

It is noon when I arrive at the factory, and the day’s production cycle is well under way. The four tons or so of ewe’s and goat’s milk that Langas buys daily from some 63 local shepherds arrived, as usual, at around 8:30 a.m. It has already been checked for contamination, skimmed slightly—about 15 percent of the fat is removed to help give the final product a firmer texture—pasteurized at about 150°F, and cooled by being pumped through a contraption resembling a radiator. It now resides in the three enormous vats in the center of the feta room.

You can’t tell by looking—the vats’ contents seem deceptively still—but the rennet and starter necessary to make the curds set have already been added, and the milk is now in the midst of ferocious fermentation. Every few minutes, Theodoratos runs his arm, and then a thermometer, through each vat. The temperature has to remain constant, somewhere between 95°F and 100°F, depending on the weather and on the final texture desired. “It’s a delicate balance,” he says. “One degree off and you’ve ruined the cheese.” At one point, he adds salt—big crystals of it, scooped up with a slotted cup and rinsed in a barrel of water. “I can’t tell you how much I add,” says Theodoratos. “I just know by looking.” Takis Langas, who is watching, interrupts. “It’s about four kilos per vat,” he assures me.

It takes about 45 minutes for the milk to be transformed into the curds, or pasta—a sweet, warm, soft substance, thick and white like yogurt and about as tenuously solid as Jell-O, bathed in deep yellow whey. The next step in the feta-making process is to cut the pasta. To do this, Theodoratos takes a long, stainless-steel, paddlelike frame outfitted with rows of wire evenly spaced about an inch apart, and runs it horizontally, then vertically, through each vat, forming a grid. “If you want very firm cheese,” he explains, “you coagulate the milk at a slightly higher temperature and cut the curds very small. If you want soft feta, you do the opposite—lower temperature, bigger curds.” Next, the cheesemaker stirs the curds with a long wooden oar docked with several large holes. Finally, he runs his hands through them, breaking up the mass from the bottom of the vat; this is literally handmade cheese.

Feta is relatively easy to produce. It doesn’t require long and careful aging; and because it has no rind, it doesn’t need to be methodically rinsed like camembert or brie. In fact, it is made pretty much the same way whether in a huge factory or in a smaller operation like Langas’s: Set the milk with starter, drain and salt the cheese, place it in molds to drain further, and then leave it to mature in brine. One obvious difference, besides scale, is that the larger manufacturers are automated. At the ultramodern Epirus cheesemaking factory in the Ípiros (Epirus) region, for instance—where annual feta production is about 3,000 tons—1,000 liters of milk are processed every four minutes on a production line. There are minor differences in technique, too, depending on whether the feta is to be packed in barrels or in tins. Tinned feta is a recent invention; the first country to produce and export it may have been Romania, in the early 1960s. Feta packed this way tends to be firmer and a little saltier than its barrel-aged counterpart. To aficionados like myself, the barrel-aged version is unquestionably superior.

As theodoratos’s feta sets, he weighs down the thickened curds in each vat with the round slotted molds in which the cheese will eventually be shaped—placing as many as will fit on the surface of each vat, then pumping out the golden green whey. Next, he fills the molds with the pasta, patting down and distributing the curds evenly so that all the molds are filled to exactly the same height. “If the pasta is too soft,” he explains, “it won’t drain properly.” He salts the molds. In about an hour, he will flip them, salt them again, and cut each mass into three triangular wedges. The curds are flipped and salted by hand three times over the course of the day. By the next morning, the cheese will be solid enough to be placed in a barrel for the first time, in five salted layers.

After three to five days in the barrel, the cheese is removed, washed down with brine, and placed in other barrels whose interiors have been steam-sterilized, then rubbed with soft whey cheese to insulate the feta from the taste of wood. Each one holds 50 kilos (over 100 pounds) of cheese. The feta now rests for anywhere from two weeks to 40 days, to ferment, mature, and exude its own brine. Finally, it is refrigerated for a minimum of two months (by law). Then it can be sold—to be eaten in slices, crumbled into salads, used as a filling for savory pastries, even cooked into sauces.

“Isn’t it an amazing thing?” Theodoratos asks me as I’m leaving. “A few hours ago all this was just milk.” _
_