The beauty is in the details at Chicago's high temple of Mexican cuisine. 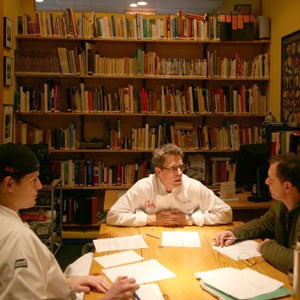 The temperature in downtown Chicago is eight degrees at 7:15 a.m., when the first of Topolobampo’s prep staff show up for work on a mid-December morning. By 8:15, production cook Enrique Gomez has begun making queso fresco and simmering tomatillos for salsa. A tortilla maker named Maria Garcia has finished kneading 50 pounds of fresh corn masa in a huge Berkel standing mixer, and purchasing manager Hector Cotorra has taken delivery of six pallets of fresh pea shoots, ten pounds of beef tenderloin, and an entire frozen suckling pig. Less than an hour after the first flick of a light switch, the kitchen has gone from cold and dark to alive and kicking, and no one has barked an order or even broken into a trot.

Calm is the order of the day at Rick Bayless’s landmark restaurant in Chicago’s River North neighborhood. When Topolobampo opened next door to Bayless’s less formal Frontera Grill, in 1989, the notion of a serious, upscale Mexican eatery was a novelty. Since then, Oklahoma-born Bayless has done more than any other chef to recast and elevate the collective American image of the food of Mexico, bringing an academic fervor to the interpretation of its pre- and post-colonial regional cuisines. To understand how Topolobampo became what is arguably the finest alta cocina Mexicana restaurant in the country, it helps to witness the obsession with detail and planning that governs a typical day there.

After donning his chef’s whites at 8:45, Bayless, a wiry and boyish 55-year-old, pays a quick visit to the kitchen and then heads upstairs to meet with Brian Enyart, his 31-year-old chef de cuisine, and Bill Shores, who coordinates the procurement of produce. The trio sit down at a table surrounded by bookshelves and launch into an intricate discussion of chiles. “The mirasol and arbol could be replaced,” Bayless says. “They’re just not tasting distinctive enough.”

“But we’ve got to have some small chiles,” Enyart says.

Then herbs. “We need some moisture-loving ones,” says Shores. Bayless suggests verbena. Shores places a small potted plant on the table. “I wanted you to try this mojito mint.” Bayless and Enyart each pluck a leaf and chew it. They look at each other with a noncommittal shrug.

“What about apple mint?” Enyart suggests.

“Or lemon mint,” Enyart counters. And so it goes.

Nothing exemplifies better the air of meticulousness that pervades Topolobampo than what happens each morning on the line: a ten-foot-long gantlet of ovens, burners, garnish trays, mini-fridges, and prep surfaces, partially concealed from the dining room by a shoulder-height counter. At 11:15, just before lunch service begins, Bayless steps into the line’s cramped, rubber-floored gangway, plucks a spoon from a pocket sewn into his sleeve, and, moving swiftly and methodically, tastes first the warm moles, then the cold salsas, then the condiments. He samples the Oaxacan-style cows’ milk cheese and turns to Enyart. “The texture’s a bit off,” Bayless says. “We should probably grate this by hand until we can start making our own next year.”

By one o’clock, heavy snow is falling outside. The dining room is full yet serene. On the line, Enyart plates up achiote-marinated wild striped bass while lead line cook Jesus Ruiz tends to four sputtering skillets at once, searing squares of pork loin (click here for a recipe of the puerco en mole negro) and shell-on fresh Gulf shrimp (for the camarones a la yucateco). By the time the last lunch customers leave, at 2:45, almost a half foot of snow has accumulated and the phone starts ringing with dinner cancellations.

Around three o’clock, Bayless and Enyart convene with the evening line cooks to sample a new tasting menu that’s debuting tonight—a dress rehearsal that will test the cooks’ ability to interpret Bayless’s vision and a crash course for the servers who will have to wax eloquent on each course. First up is an ensalada de noche buena: a spare composition of cubed house-cured salmon, agave-braised beets, jicama, and microgreens from Bayless’s own garden. When the dish gets a thumbs-up from Bayless, more plates are rushed to the bar for a dozen or so black-clad servers to taste. The group is being coached by sommelier Jill Gubesch on how to pronounce Maximin Grunhauser Riesling Kabinett Mosel-Saar-Ruwer, the wine she’s recommending for pairing with that salad. Next up are uchepos gratinados (sweet corn tamales baked with chilaca chile cream and topped with wild chanterelles), atun sellado con bacalao (pan-roasted tuna with slow-simmered cod), and pavo en mole negro (skillet-seared free-range turkey breast in a 29-ingredient Oaxacan black mole). All of them get the okay from Bayless and Enyart, with a caveat or two. “I’m a little worried about how long it’s going to take you to put that salad together,” Bayless says to a young cook named Megan O’Connor, who assures him she won’t fall behind.

The snow is still coming down strong at 5:45, when the first dinner parties straggle in. Topolobampo’s longtime manager, an impeccably dressed man named Larry Butcher, peers out the front window, then at the reservations book. “I’ve never seen it this bad,” he mutters. On the line, pre-dinner-rush jitters give way to letdown at the prospect of a bust evening. And yet, by 7:30, virtually all the tables have filled. The saving grace: reservationless regulars who live within trudging distance and have learned to appreciate the upside of a Great Lakes blizzard.

The new tasting menu is proving popular; the cooks, freshly energized, turn out plate after perfectly composed plate. Around nine o’clock, Bayless, who has been hovering near the line, sits down to dinner at Frontera Grill. Topolobampo’s last order comes through at 9:45, but no one seems ready to venture back outside. Finally, at 11:15, the last customers, a group of 30-somethings in smart business attire, bundle themselves into a cab, which fishtails away down a frozen, deserted Clark Street. The snow has finally stopped.