A Pennsylvania church community bakes for its life—and its pleasure. 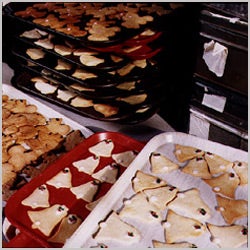 On the first Saturday in December, every year for the past 50 years, thousands of Christmas cookies have gone on sale at Trinity Church in Solebury, Pennsylvania. Even with a limit of two boxes per customer (each box weighs a pound and contains about fifty cookies), they are usually sold out within 45 minutes.

This annual Cookie Bake—both the sale itself and the flurry of preparation that precedes it—is a tradition that continues to conjure up the feel of the rural agricultural community that Solebury used to be. I’m a relative newcomer, having moved here, to central Bucks County, from Connecticut just over five years ago with my husband, David, who is now rector at this Episcopal church. Bucks County is still home to rolling fields and old fieldstone barns, but it’s also one of the hottest growth areas in the state, with new dwellings cropping up where soybeans once grew. The stone chapel built by a few farm families in 1876 is now crowded with old-timers and new members alike—the former reminiscing about the way this area used to look half a century ago, the latter, like me, knowing mostly the culture of suburbia.

Cookie Bake had its origins just after World War II, when a small group of women at Trinity Church started baking cookies to sell at their Christmas bazaar. They alone controlled allocation of the proceeds, making donations as they chose to charities or towards church improvements. As times changed, however, so did the group. In the 1960s and ’70s, as women started working outside the home and thus had less time for unpaid good works, men started helping out at Cookie Bake. Soon, teenagers, children, and even people not affiliated with the church were welcomed. Somehow, this socially diverse community has clung to this tradition in an effort to hold on to what it believes in—a strong connection with neighbors and friends. Now, over a hundred of us participate, volunteering for one or more of the three-hour cookie-making shifts that begin at 9 a.m. and sometimes run until 9 p.m. for six days. In that time, we bake about twenty thousand cookies. And even though we know that the money we raise every year from Cookie Bake (about $1,700 in 1996) is probably equaled by a few leisurely passes of the plate on Sunday mornings, we carry on staging it. The people of Trinity Church and their friends stopped baking Christmas cookies for the money a long time ago. Now we’re baking for the life of the community.

Preparations for Cookie Bake begin months before the holidays. In July, while everyone else is still on vacation, Mary Beth Kineke—co-chair of this year’s event—starts scouring the Wednesday food sections of the local papers for the best price on butter. When our local Delray grocery store lists it at $1.29 a pound, she buys more than a hundred pounds of it and makes room for it in her freezer. At the end of the summer, Sue Scholer sets out (at around the time her daughter heads off to college) for Sam’s Club and loads up the back of her new Jeep Cherokee with the 250 pounds of flour and 225 pounds of sugar needed to make over a quarter of a ton of dough. In early October, Libbe Mason, manager of the local library, heads to a wholesaler in Philadelphia where she purchases the 15 pounds of blanched whole almonds required for our signature cookie—the almond round. Then, of course, there are decorations to locate, boxes of parchment paper to buy, cookie cutters to round up, and inventory to take (How many cookie sheets and rolling pins do we have?).

In November, when the jack-o’-lantern faces of Halloween have shriveled into a parody of senescence and the pungent smoke from leaf-burning fires fills the sky with wisps of gray, everyone in and around Solebury knows that cookie-baking time is near. Trinity Church’s KitchenAid mixer emerges, and a call goes out for other heavy-duty mixers. A week or two before Cookie Bake begins, a smaller group of us gets together to make the dough. Finding cold storage for such a huge amount until baking day is a problem, but this year, the local high school has donated space in its cafeteria’s walk-in.

Almond splitting is the first official Cookie Bake occasion. About eight of us gather in the homey church kitchen to prepare the almonds. The room warms up quickly, and the scent of steaming nuts intensifies. (Steaming softens the almonds so that we can easily halve them with small, sharp knives.) Since our cookie dough is rolled out almost paper-thin, raw almonds would never be sufficiently toasted by the time the cookies had baked. So the almonds, once split, are slid into the oven for a preliminary browning.

Halfway through the tedious task, I invariably ask my coworkers, “Is this really worth it?” Then I add—half-seriously—that I would gladly donate all 15 pounds of sliced almonds myself to save us some time. Although shortcuts have been adopted over the years, almond splitting is sacred. “I would not want to be the one to stop the tradition,” Cathy Stephens, a nursery school teacher’s aide, tells me. Nor, in reality, would I.

Cookie Bake is like a modern quilting bee. We all work together closely for hours, many of us taking double shifts. The conversation, conducted without eye contact and punctuated by silences, hovers above the work at hand. You find out who’s the best dentist in town. We talk about our kids—those who have long since left home and those who are still in diapers. Wisdom passes from one generation to the next. As I quietly brush star-shaped cookies with egg wash, I listen to the stories. Mollie Hallowell, a writer and longtime church member, tells the tale of Crofton Thompson, the former Trinity Church minister whose wife and unborn child were killed in a car accident just before he arrived in Solebury. Peg Clark and her young son Michael drop candy holly leaves onto cookies that look like wreaths, while Betty Fergusson recalls her life in the Red Cross during World War II. At the rolling station, church treasurer Doug McArthur, a retired accountant, meets Luda Makhinia, a recent immigrant from the Ukraine. Their conversation—with Makhinia struggling for every English word—would normally last just a few awkward minutes. But because they are bonded by a common task, silence is absorbed in their work and conversation comes when it will. Before long, McArthur offers to help Makhinia file her income tax return.

One weekday morning, the 3-year-olds and 4-year-olds at the church nursery school smell baking cookies and plead with their teacher to give them a kitchen tour. So she asks veteran baker Vicki Roland, who can hardly refuse: Forty years ago, Vicki was one of those nursery school children enchanted by the scent of butter cookies wafting along the hall. She ends the tour with a demonstration at one of the decorating tables, where each child picks up a cookie before going back to class.

Though Cookie Bake is much more relaxed than it was when a handful of stern women ruled the church kitchen, there are still a few basic rules. Dough must be rolled as thinly as possible, resulting in crisp, golden, almost gossamer cookies. (The night before baking begins in earnest, long tables in the library are raised to counter height on cement blocks and then covered with thin canvas to keep the rolled dough from sticking.) The most experienced rollers are given the more temperamental nut-laden walnut-spice dough, which can stick and crumble if overworked or too warm. Only those with a watchful eye and short stature—taller people being prone to backache—are allowed to monitor the oven. Thus qualified, Marilou Stewart has been oven keeper for the last 20 years. (There’s talk every year of bringing in a second oven for the week, but the church’s old Garland always ends up doing full-time duty.)

After six days of practically nonstop baking, the tally begins to mount. Each day’s production is carefully noted and stored away. Properly packing the cookies is just as important as rolling, decorating, and baking them. Large tins, some dating back to the first Cookie Bake over fifty years ago, are pulled from the church attic. The cookies are carefully arranged by type in the tins between sheets of waxed paper, insuring as little breakage as possible. Once filled with cookies, the tins are stacked in a cool, secure place (atop a shelf in the church library) until “cookie boxing” time on the Thursday before the sale.

Early in the morning on the first Thursday in December, two days before the Christmas bazaar, an eager group of us gathers to box the cookies. Everyone finds a station: bakery box assembly, ribbon cutting, opening up the tins, and organizing the cookies. We now have a rough count of each cookie variety, and a number is scrawled on a scrap of paper beside each tin to tell the packers exactly how many of each type should be included in every box. Then, like children playing musical chairs, we move round and round the table, each of us with a bakery box, picking up the designated number of cookies—pecan squares, stars, snowmen, scotties, santas—tin by tin. The game continues until all the cookies are gone. Filled boxes are passed to ribbon tiers, beribboned boxes are stacked onto a rolling cart, and the cart is wheeled into the unheated church. There, the white boxes wait, quietly, like perfect children, until Saturday morning, when they’re brought back into the library to be sold. Like Christmas Day itself, the actual cookie sale seems almost anticlimactic. Neighbors, friends, and people who’ve always gotten their Christmas cookies at the Trinity Church bazaar line up before the doors open, and wait to buy their two boxes. Less than an hour later, the last of the four hundred or so boxes has disappeared.

Those who work at Cookie Bake don’t have to wait in line with the others, but we, too, are limited to just a couple of boxes apiece. My husband and I mail one of our boxes to our friends in France and one each to our parents. I put our cookies in the freezer until Christmas Eve. Then we defrost and eat them. And with each bite, we taste the sweet flavor of shared community.