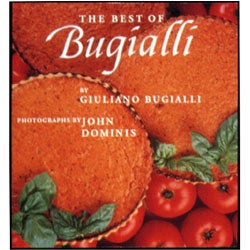 This is the era of the healthy Italian cookbook. With everybody simultaneously talking about the wonders of the “Mediterranean diet” and exploring the Italian restaurants that seem to have opened on every street corner in America, it must have seemed like a natural to the publishing industry. Some of the volumes in the works will undoubtedly turn out to be terrific. But if the gorgeously produced Healthy Italian Cooking (Stewart, Tabori & Chang, 1994) is any indication, many won’t.

The book, which was published in England as Italian Vegetarian Cooking, is the work of Emanuela Stucchi, daughter of prominent cooking teacher, author, and winery owner Lorenza de’ Medici—who provides the book with a brief introduction. Ms. Stucchi may or may not be a vegetarian (she is silent on the subject in her book), but she does not seem to have the faintest notion of what constitutes a healthy diet. And some of her dishes are just plain weird.

Consider her Cauliflower Surprise, whose name makes it sound like something an American woman’s magazine of the ’50s would have considered cute. Here is the recipe: Boil a whole cauliflower, cover it with homemade mayonnaise, then cover that with slices of hard-boiled egg. I am not kidding. “The surprise,” writes Stucchi, “is the cauliflower, which is hidden by the eggs and mayonnaise.” She suggests that you pair this with Tomato Bombes with Mayonnaise for a cold buffet. The tomato bombes are more of the same: Tomatoes are blanched and peeled, their insides are replaced with chopped herbs and their outsides are covered with mayonnaise. If I saw either of these dishes on a buffet I would run, fast, in the other direction.

Most of the main courses do not sound much more appealing. I can’t remember the last time I had an overwhelming urge to eat Millet with Spinach or Brown Rice with Wild Mushrooms. The Carrot and Oat Pudding sounds absolutely dreadful. And while Sprouted Buckwheat with Apples, Radishes and Emmenthal Cheese might be some people’s idea of dinner, it is not mine.

Some of the dishes do sound appealing. And the photograph of Green Pea Soup is so beautiful I considered going off to purchase the fresh green peas to make it. (The photographs are by Gus Filgate.) But then I found that the recipe called for a quart of vegetable stock, a recipe that Stucchi neglects to include. I did find a recipe for Crepes in Vegetable Broth, but I wasn’t sure whether this broth would work in pea soup. And by the time I had finished thinking about all of this, making the pea soup just didn’t seem very appealing anymore.

The fact that Stucchi’s book is also published in England makes for a few odd moments. One recipe calls for seven ounces of young stinging nettle leaves, which was not a staple in my market the last time I looked. Every time the word aubergine is used—and it is used frequently—it is followed by the explanation that aubergine is eggplant, which gets slightly cumbersome. And the writing has a gee-whiz quality that is positively irritating to anybody who has ever had a passing interest in vegetarianism. Are there really people who don’t know that “Vegetables are among the best sources of vitamins, minerals and fibre that we have”? I doubt it.

I have a suggestion for anybody who is about to spend $30 for this book: Get yourself a copy of Diet for a Small Planet (Ballantine Books, 1985) by Frances Moore Lappe instead. It is a vegetarian classic that has an impressive repertoire of recipes that are easy to cook, inexpensive, and nutritionally balanced.

And then, to satisfy your hunger for beautiful pictures (by John Dominis) and truly appealing Italian recipes, pick up Giuliano Bugialli’s latest book, The Best of Bugialli (Stewart, Tabori & Chang, 1994).

The truth is that Mr. Bugialli unwittingly makes a far better case for the vegetarian impulse in Italy than Ms. Stucchi: Although he does not try to capitalize on the trend, only 13 of the 63 recipes involve meat or fowl in any way. And there is not a single recipe in this book that I would not be happy to eat.

Giuliano Bugialli, like Ms. Stucchi’s mother, is a well-known teacher of Italian cooking. His recipes are intriguing and delicious, and they work. Most of those he has chosen to include in this volume are fairly simple: scallops are quickly sauteed with wine and brandy. Chicken is marinated in lemon juice and hot pepper flakes and roasted covered with lemons. Shrimp are threaded onto sprigs of rosemary, coated with bread crumbs, baked in a hot oven, and served with thyme sauce.

The most complicated dish is a multistep recipe for “kerchiefs” of almost-translucent pasta stuffed with a cheese and spinach mixture, baked with cream sauce, and covered with fresh tomato sauce. It takes a few hours to produce, but it is time well-spent: This is the kind of dish that gives Italian vegetarian cooking a good name.

So does Polenta with Mascarpone and White Truffles or the Tomato Tart. Orecchiette with Cauliflower is easy to cook and easy to like. And while it is annoying to find that Spaghetti with Air-Dried Cherry Tomatoes does not contain the advertised air-dried tomatoes, I can forgive Mr. Bugialli almost anything for his Sage Batter Cake. This fragrant and savory cake is one of the most interesting appetizer dishes I’ve come across this year.

In the end, the difference between these two books can be summed up in a single recipe: Panzanella. Never mind that Mr. Bugialli thinks of the typical Tuscan bread salad as an appetizer, while Stucchi considers it a main course. Their whole approach to the dish is dramatically different.

Stucchi tells us to place two pounds of stale bread chunks in a bowl, and cover with water and one cup of vinegar and leave to soak until soft. How much water? She doesn’t say. Mr. Bugialli specifies the amount of water and the length of soaking time. Each step of the way, he is absolutely precise, which makes his recipe very easy to use. But there is another crucial difference: For two pounds of bread, Ms. Stucchi makes a dressing out of six tablespoons of olive oil. Mr. Bugialli’s recipe uses only one pound of bread and 3⁄4 of a cup of olive oil. Which one would you rather eat?