Besides the valencia and navel, only a handful of oranges and closely related hybrids are commercially available in the US. Here are five we love. 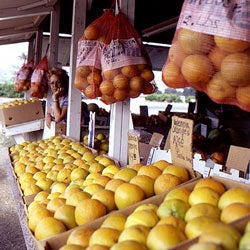 ”The sex life of citrus is something fantastic,” Florida pomologist William Grierson once remarked. All seven major species of the genus Citrus—sweet orange, sour orange, mandarin orange, grapefruit, lemon, persian lime, and mexican (or key) lime—interbreed with abandon. Classifying the hybrids that result can be a dizzying task. “When we start talking taxonomy,” says Ottillia Bier, a researcher at the University of California at Riverside Citrus Variety Collection, “we just start laughing.” Nonetheless, apart from the valencia and navel, only a handful of oranges and closely related hybrids are commercially available in this country. Here are some of them:

**CARA CARA **A gorgeous, crimson-fleshed navel hybrid with low acidity and lots of sugar. Originally from Venezuela, it also grows well in California, and is available from mid-November through early March.

**MORO **A deep-red, almost burgundy-colored blood orange, grown in both California and its homeland, Sicily. Available from December through April, the moro tastes faintly of berries and is nearly seedless.

**SEVILLE **A classic sour orange that traveled to Spain with the Moors and flourished there. It is the quintessential marmalade orange, and its juice goes into orange liqueurs like Cointreau as well as marinades for meat.

**TAROCCO **Like the moro, this is a Sicilian blood orange, and most of what’s sold here is imported from Italy. Richly flavorful, juicy, and sweet, with hues of caramel and ruby in its flesh, it is considered Italy’s best arancia di tavola, or “table orange”. The tarocco is available here from January through June.

**TEMPLE ORANGE **Though often mistaken for an orange, the temple is actually a tangor, a cross between a mandarin and an orange. Its thin rind is easy to peel, and its pale orange pulp is spicy, full-flavored, and tart.