What Makes a Perfect Pizza?

For Neapolitans, simple is best: perfect pizza is made with tomatoes, oil, salt, and mozzarella—just be sure to use the right kind. 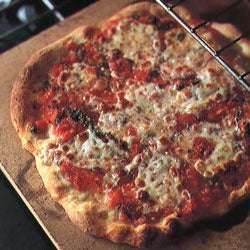 The ideal tomatoes for making real Neapolitan pizza are available only in and around Naples itself. Called piennule or o’piennulo e’ pummarola, they are nearly round and about an inch in diameter. Often picked when still slightly green or yellow, they’re hung in grapelike bunches from rafters or balconies to mature, then quartered and strewn with salt, and sometimes oregano or basil, before they’re used.

The oil is usually a mixture of olive and seed oils (olive oil alone is considered too heavy). For seasoning, purists insist on coarse sea salt or rock salt crushed in a mortar.