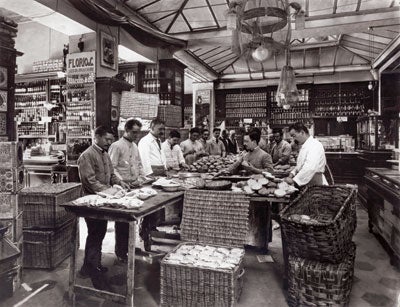 People have eaten sandwiches for as long as they’ve baked bread, but this culinary form really came into its own in the modern era. The sandwich assembly line shown here, photographed in an Italian grocery store in 1913, is a prime example. The mustachioed team is building sandwiches by the dozen to fill street vendors’ baskets. What better food to fuel the fast-paced lifestyle of an increasingly urbanized population? Eminently portable, sandwiches became a standby for office and factory workers unable to eat lunch at home, as many of their preindustrial forebears had done. They were just the thing to take along on freshly laid railway lines to picnics in the countryside, and a suitable companion for all sorts of leisure activities. Charles Dickens, in the “Uncommercial Traveller” series he wrote for the journal All the Year Round, in 1860, describes the fare available at the refreshment bars of London theaters: “The sandwich—as substantial as was consistent with portability, and as cheap as possible—we hailed as one of our greatest institutions. It forced its way among us at all stages of the entertainment, and we were always delighted to see it.” Think, too, of Leopold Bloom, in James Joyce’s Ulysses (1922), ducking into a Dublin pub at lunchtime. “A cheese sandwich, then,” he says. “Gorgonzola, have you?” With a glass of French burgundy, Bloom’s sandwich neatly sums up the cosmopolitan pleasures of inhabiting the modern city. —Beth Kracklauer