24 Hours of Thailand in Los Angeles 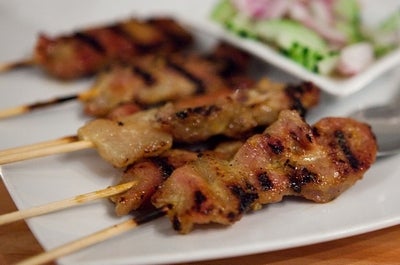 I’ll never forget my first taste of pad thai. I was a bright-eyed eight-year-old with an emerging palate, and I was stunned by the medley of sweet, sour, and spicy fighting and harmonizing in an eggy mess of chewy, sumptuous noodles. From that moment, I sought out Thai food every chance I got: noodle dishes, coconut-laden curries, crispy fish dishes, robustly-flavored salads. By the time I moved to Los Angeles last year, I thought I had a pretty solid gastronomic background in the genre.

But L.A. has of the largest Thai populations in the country, and the city showed me facets of Thai cooking that I hadn’t known existed – street food straight from the Bangkok markets, Burmese-style stews from the north of the country, fiery-hot dry curries from the south. Simply living here is a true culinary education – and it doesn’t ever stop. You could spend 24 hours eating nothing but exquisite Thai food in L.A. (if you don’t let pesky little things like satiety or traffic stop you). Here’s our itinerary.

8 a.m.: Stop at Sapp Coffee Shop (_5183 Hollywood Blvd__, Los Angeles__; 323/665-1035)___ for a Thai iced tea and a bowl of boat noodles, the central Thai noodle soup, which takes its name from the boat people who introduced the dish on the canals of Rangsit. This earthy, funky soup (which gets its signature dark, rich broth from a healthy dose of beef or pork blood) is the southeast Asian answer to menudo, teeming with all manner of offal, making it a true protein power breakfast. You may be tempted to come back later for a plate of the jade noodles, a heaping bowl of crab, roast duck, and barbecue pork served on a bed of toothsome green noodles.

9:30 a.m.: The tom yum noodle soup at Pa-Ord Noodle (5301 Sunset Blvd., #8, Los Angeles; 323/461-3945) is equal parts hot and sour, providing a piquant wake-up call for the mouth. For your slurping pleasure, you can choose from a range of noodles – from bright yellow eggy strands to wider, flat rice sheets.

10a.m.: Duck into the tiny storefront Hoy-Ka Noodle (5401 Hollywood Blvd, Los Angeles; 323/463-1339) for a terrific Thai brunch of crispy pork and Chinese broccoli, made even more richly satisfying with the addition of a fried egg on top.

11a.m.: Though the ** Bangluck Market** (12980 Sherman Way, North Hollywood; 818/765-1088) is smaller than other Thai groceries in town, it makes up for its diminutive size with a solid selection of spices, sauces, and a good assortment of pre-made pastes and curry mixes. The fish counter also offers a range of seafood options and for no additional charge, they’ll even season and fry up your purchase for you, which gives the store its signature savory aroma. Be sure to visit the dessert aisle just passed the registers for sweet Thai goodies, brought in daily by local bakeries – one not to miss are the buttery bai teoy buns, which are pillowy soft and filled with subtly sweet pandan custard.

Noon: Tucked into a crowded strip mall on the edge of Thai Town, Spicy BBQ (5101 Santa Monica Blvd, 323/663-4211), a cozy cafe with a only a handful of tables, serves up some of the best Northern Thai in the city. Be sure to try their swarthy take on the egg noodle soup kao soi and the nam prik oom, a roasted green chile and eggplant dip whose heat creeps up on you leaving you to reach for the accompanying plate of cooling cucumber slices. The spicy jackfruit salad is also a stunner.

2 p.m.: Join downtown denizens on their lunch breaks at ** Esaan Thai** (601 W. 5th St., Los Angeles; 213/488-9995) a small snip of place, across from the Central Library. The menu combines flavors of Northeastern Thailand with those of Vietnam, creating light lunch items like the Thai banh mi with lemongrass beef and spicy mayonnaise on a crackly baguette or the a cooling pad thai salad, either of which pairs splendidly with a refreshing glass of lemongrass lemonade.

3 p.m.: Tucked beside a Subway and a take-out Mexican joint in an unassuming suburban strip mall, Renu Nakorn (13019 E. Rosecrans Ave., Norwalk; 562/921-2124) seems like an unlikely place for such complexly flavored Northern Thai cooking. It’s a trek from Los Angeles (so best to go in the afternoon to avoid rush hour), but well worth the journey for regional dishes like the naam phrik num, a hot but earthy green chili dip served with deep fried pork cracklings; the homey, turmeric laced pork stew; or the sour fermented sausage.

5 p.m.: Sidle up at the long wooden bar at ** Rambutan Thai ** (2835 West Sunset Boulevard, Los Angeles; 213/273-8424), a slick, dimly lit bistro in the heart of the hip Silver Lake neighborhood. Pair a few small bites like the housemade green curry dumplings or the grilled squid with chile dipping sauce with a Phuket beer or a range of Thai inspired cocktails, like the mosquito bite — soju, muddled mint leaves, lime, simple syrup, soda and a sugar cane stick.

6 p.m.: Though Ganda (5269 Hollywood Blvd, Los Angeles; 323/466-4281), a diminutive, cash-only establishment shares its strip mall real estate with a handful of other popular Thai Town restaurants, it stands out for its take on Bangkok favorite, yen ta fo, a tart noodle soup, flavored with fermented soy bean paste, and its mild, comforting pumpkin and egg dish pad fuk tong. (Take heed, Ganda’s dishes can be addictive – while in L.A. filming the second season of Top Chef Masters, SAVEUR’s editor-in-chief, James Oseland was so taken with the restaurant’s Central Thai specialty, pla duk pad ped, a crispy dry-braised catfish in a deep red chili paste, that he came back five days in a row.)

8 p.m.: ** Jitlada ** (5233 W Sunset Blvd., Los Angeles; 323/663-3104) the culinary darling of Thai Town, has inspired followers so passionate that one blogger has made it her mission to eat her way through every dish on the massive, multi-page menu. As a novice visitor, best to begin with the menu of stunningly igneous Southern Thai specialties like the khua kling phat tha lung (chewy morsels of beef slathered in dry turmeric laced curry) or the wild curry with catfish and sator beans. Milder, but still delicious, are the coco mango salad and the soupy green curry with delicate egg yolk-stuffed fish balls.

9 p.m.: After a day of spice, you’ll need the cooling effects of dessert, and ** Bhan Kanom Thai** dessert shop (5271 Hollywood Blvd, Los Angeles; 323/871-8030) delivers brilliantly. With myriad treats to sample, you made need to make multiple stops to this Thai Town strip confectionary, but be sure not to miss the bright green, subtly sweet pandan custard or the individually wrapped coconut puddings, which combine large tapioca pearls and corn kernels in a creamy base, creating an explosion of textures. When they’re fresh the grilled taro and coconut pang chi are also well worth a taste.

10 p.m.: When you’re ready for more spice, Ruen Pair (5257 Hollywood Blvd, Los Angeles; 323/466-0153) will gladly bring on the burn with fiery salads and potent sauteed dishes like the pad prik king, chicken with red curry and lime leaves. For a bit of a respite, try crispy stir fried morning glory or the salty egg salad; though be warned, even these can incite a minor blaze.

11 p.m.: Like many its Sunset Strip neighbors, ** Night + Market** **** (9041 Sunset Blvd, West Hollywood; 310/275-9724), the hip offshoot of the decades old, white tablecloth Thai restaurant Talesai, is a hot spot. But chef/owner Kris Yenbamroong delivers his heat through fiery dishes, which he says were inspired by the “market food” he ate while living in Bangkok as a teenager. Night + Market offers an impressive array of European wines, which pair well with the startling blazing, but delicious tuna koi soi (a kind of tuna tartare with plenty of fish sauce and roasted chiles) or the lusciously tender pork skewers, which are bathed in condensed milk and then grilled.

Midnight: It may be loud and touristy, but the brightly lit Hollywood stalwart ** Palm’s Thai ** (5900 Hollywood Blvd., Los Angeles; 323/462-5073) remains a favorite for its solid versions of satisfyingly chewy Thai beef jerky, zesty tom yum soup, and a piquant papaya salad. The real draw, though, is Thai Elvis, who takes the stage each weekend night for crooning versions of the King’s standards.

2 a.m.: The enormous helpings of Krua Thai’s (13130 Sherman Way, North Hollywood; 818/759-7998) namesake pad thai are made using a traditional Thai street food preparation — served with fried tofu, sweet radish, peanuts, bean sprouts and lots of spicy chile. Be warned, though, this funky, fiery antidote to wee hour weariness may forever ruin you for more Americanized versions of the now ubiquitous sauteed noodle standard. This noodle master also excels at other classics like pad see ew (try it with beef) and an amped up version of the flat noodle dish rad naa, mixed with dozens of ingredients, including squid, barbecue pork, pork stomach, and shrimp.

6 a.m.: To assure that they haven’t run out of their piping hot Chinese-style crullers, you’ll want to arrive at Siam Sunset (5265 W. Sunset Blvd., Los Angeles; 323/467-8935) at sunrise. Hidden in the front of a Sunset Boulevard motel, this unassuming joint is a favorite breakfast spot among Thai locals for its steaming bowls of jok, the mildly seasoned Thai version of rice congee, served with roast duck and an egg. For a sweeter start to the day, opt for the ginger and soft tofu soup served with smaller, crispier versions of the popular fried donuts.