In the Land of Plenty (The Peloponnese) 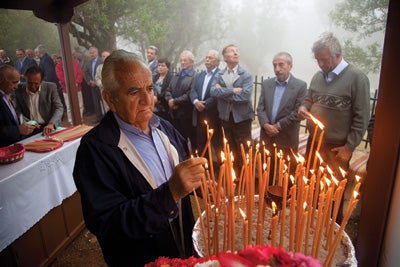 This 8,320-square-mile peninsula has a richly variegated landscape: a mountainous interior, broad valleys, a coastal plain, and 856 miles of coastline. That landscape supports an exceptional agricultural diversity. The plain teems with artichokes and eggplants; agiorgitiko grapes thrive in the northeast’s Nemea Valley; and the mountains are abundant with olives, including kalamatas, which are named after the southwestern port city. The Peloponnese is known, too, for its unique animal products, including barrel-aged feta and olive oil-cured pork, which comes from the Mani, the peninsula’s remote middle spur.

On an unusually misty spring morning along Greece’s southeastern Peloponnesian coast, everyone in Poulithra and Amygdalia had come to a small church on the winding road that connects the two towns. They were celebrating a name day, honoring those members of the community who are named after a particular saint, or in this case two, Saints Constantine and Helen. I had been in the area for less than a week, and already I knew half the congregants: the shepherds who milk their goats twice a day to make a brined and barrel-aged cheese called touloumotyri; the shepherds’ brother, who is Poulithra’s town baker; three local beekeepers, including an uncle of my friend and traveling companion, Maria Xerakia; and many others in Maria’s extended family and their neighbors.

The church couldn’t hold everyone, and the crowd spilled into the yard, from which the priest’s intonations could be heard. The older men solemnly crossed themselves as the liturgy was read. A small white goat—the church raffle prize—stood tied to a tree and bleated. People lit beeswax candles for the saints, and when the service was over, we gathered around tables piled high with artos, a bread of celebration and offering that the baker, Dimitris Konstantas, had dusted with confectioners’ sugar and flavored with a fruity spice called mahlepi, made from the pits of tart Saint Lucie cherries. As we greeted one another with good wishes, we filled up on slice after slice of artos. It was substantial, and it was sweet.

I had come to Poulithra and Amygdalia with Maria—a 22-year-old writer who lives in New York City but spends part of the year here, in her parents’ birthplace—to sample home cooking in Greece’s most fertile region, the Peloponnese: the hand-shaped peninsula that hangs off the mainland’s bottom left corner. Here, lemons, oranges, artichokes, wine grapes, wheat, and other crops grow in profusion. It’s an abundance that once supported the Mycenaean cities of Homeric legend and, later, classical Sparta (the modern city is located in Laconia, the peninsula’s southeastern prefecture). The members of Maria’s extended family take advantage of all of it, raising or foraging the ingredients for nearly all the foods they eat, from olive bread, made with meaty kalamata olives, freshly dug sweet onions, and hand-stretched phyllo dough, to stews of greens and fresh fava beans.

It was Diamando Xerakia, Maria’s energetic 62-year-old aunt, who gave me my first taste of home cooking here. I was introduced to her just after I got to the town—an assemblage of red-tile roofs and coffee shops where old men rest in the shade along narrow lanes bordered by citrus trees—and I witnessed this powerhouse cook at work in the basement kitchen of her home. She was baking bread when I arrived; she made three different kinds: karveli, a sourdough loaf flavored with anise; tyganopsomo, disks of dough fried to a golden brown; and an addictive flat bread called ladopropira, which is punched down onto a sesame-sprinkled cookie sheet, then doused with olive oil and baked to the semihard consistency of a soft pretzel. After she finished with the bread, she filled the hollowed-out shells of fried eggplants with a rich lamb-and-veal mixture flavored with onion and cloves, covered them with a thick bechamel sauce, and baked them to create a dish called papoutsakia, or “little shoes.” And she hand-pressed nuggets of pasta dough into curved shapes called gogyzes, which she boiled and tossed with grated touloumotyri and sizzling goats’ butter. Commenting that the stuffed eggplants, the bread, and the creamy pasta would make me fat but that greens would keep me thin, she served the former foods with an enormous mound of tender greens called vlita. While many greens are foraged wild in early spring in the pastures near Amygdalia and shade-dried to be eaten throughout the year, vlita are cultivated in yards and boiled fresh; Diamando’s had an almost wheatlike flavor.

Poulithra and Amygdalia are, in essence, one town. Historically, the people of this sleepy section of the Peloponnese’s Arcadian prefecture would spend half the year in the waterfront town of Poulithra and then, as winter snows lapsed into mild mountain summers, move eight miles up-country to Amygdalia to escape the coastal heat. In both places, they lived off nature’s plenty: the coast offered citrus, seafood, and a host of crops like the tender, small tsakoniki eggplants native to the area, while the mountains yielded meat and dairy from herds of goats and sheep, plus figs, wild greens, honey, walnuts, and the almonds after which Amygdalia is named. Today, with money to be made catering to summer vacationers from Athens, most locals live year-round in Poulithra. But their mountain properties are far from abandoned. The houses are maintained, and family members visit the up-county village often to gather culinary riches from its yards and pastures. “If you’re from Poulithra,” Maria had told me before my trip, “you’re from Amygdalia. It’s the same place.”

She’d told me as well that meals here—particularly the huge midday repast, typically followed by an afternoon snooze—tend to be big gatherings, shared by children and parents and grandparents, relations from far and near, and neighbors and friends who happen by. Almost always, the extended family contributes to the table, bringing foods they’ve prepared at home. The name day lunch Maria and I attended was no exception. Scores of friends and family came together beneath a carob tree outside the home of her uncle, Christos Moriatis, the beekeeper, whose 14-year-old son is named Konstantinos, after the saint. Christos’s wife, Maria, shared hostessing duties with Diamando, who prepared a dish of pork, which is popular in the region, stewed in a creamy, tangy lemon-and-egg sauce with young celery that Diamando had grown alongside the wild greens in her backyard. Nearly all of the ingredients in the dishes at the lunch, in fact, had been sourced nearby by family members. The tender goat meat that our hostess Maria stewed in a delicious allspice-flavored tomato sauce came from a kid raised by Diamando’s husband, Theodoros. Christos’s mother had foraged the mild-tasting hyacinth bulbs that were poached in a peppery olive oil, which in turn had been made from the fruit of a tree growing in Maria’s yard. All the spring produce in the rich eggplant casserole, cooked with plenty of onions, tomatoes, and feta; the mixed roasted vegetables; and the salad strewn with rusks had been grown in the Moriatises’ garden. Even the light-bodied retsina served with lunch had been made by someone at the table: Diamando’s son Takis, who used resin from local pine trees to impart the wine’s namesake flavor. What’s more, I realized, it was only May. As the weather got warmer, even more of the fruits and vegetables Maria cooked with would come from the garden.

Diamando’s other two sons, Christos and Georgios, joined us to eat; friends wandered over for coffee. We polished off our meal with spoon sweets made from wild pears and green walnuts foraged from the mountains. There was a moist walnut cake, made from nuts Christos’s mother had collected from her own trees. Finally, there were diples. The sweet, ouzo-spiked fritters, a requisite holiday dessert, are bigger and bolder in the Peloponnese than in most other parts of Greece. Maria had shown me how she expertly shapes the fritters, folding them with the tines of a granny fork into wide, wallet-shaped forms. After frying, the fritters are soaked in syrup. In Christos’s house, that syrup was made with his own honey, produced by bees he raises in the yard and carts to locations throughout the nearby mountains so they can feed on seasonal plants and trees. On this day we tasted his very best blend, a heady mix of fir and thyme honeys that gave notes of vanilla and caramel. It was the flavor of celebration and plenitude.