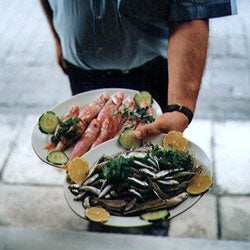 The denim-shirted journalist at the next table has a system. He taps on his PowerBook, catapults what looks like a french fry into his mouth, then quaffs clear liquid from a glass as a look of pure bliss ignites his face.

Of course, because this is Athens, it’s not a french fry, but a sliver-thin fish called marithes, whitebait to Americans, deep-fried and eaten whole—head, eyes, tail, everything. And the drink isn’t water, but ouzo, the fiery, anise-flavored national spirit. Solo dining is a rare thing in this land of olives and honey—where food and the company you keep while eating is all, and the working lunch is unheard of. But elections loom this weekend, and a man’s gotta do what a man’s gotta do.

I watch this scene play out from my sun-streaked corner at Apotsos, one of the oldest ouzeris (pronounced oo-zer-EEZ), or ouzo bars, in Athens—a dimly lit, cavernous hall of a place, with vintage ads on the walls, ceiling fans, and waiters in black pants and white shirts.

When you think ouzeri, think tapas bar. A place to drink, with food attached. Not full meals, but bits of savory this and piquant that—the Greek appetizers called mezethes, which marry so well with ouzo, beer, and wine. The difference is that, while Spaniards tapas-hop as a prelude to dinner, Greeks are content to sit down in one place, nibble on an ample round of mezethes, and call it a meal.

Ouzeris are very much the thing now. They serve some of the most exuberant and sophisticated food in Athens—which is decidedly not a restaurant city. There’s even talk of “ouzo culture,” the Greek equivalent of cafe society. Modern-day Zeuses and Athenas of media, politics, commerce, movies, and music mix with Athenian yuppies at lunchtimes that stretch into the waning afternoon. They gather in family groups for dinner late into the night. Ouzeris are magnets for women, who feel more comfortable in these civilized confines than they do in certain Zorba-style tavernas or the old-style coffeehouses that can be bastions of maleness.

Once upon a time, ouzeris, which originated as workingmen’s hangouts in northern Greece—the birthplace of ouzo—served small helpings of simple fare: sliced sausages and feta cheese, olives, maybe a heap of fried peppers, rough bread.

Now that the mezethes have become more elaborate, the breads are apt to be sesame-studded French, and some ouzeris serve portions generous enough to be mistaken for main courses were they not offered on dessert plates. The menus have changed, too. Along with the traditional flavoring trio of lemon, oregano, and olive oil, you’ll find dill, cloves, cinnamon, even hot chiles—all staples of Greek regional cuisine, not previously common in these urban ouzeris. A few have even started experimenting with what can only be called Greek nouvelle cuisine.

I discovered ouzeris myself on a trip to Athens several years ago. My most recent stay in the city, late last year, was all too fleeting, just four days long—but I did find time for an ouzeri crawl, revisiting my favorite places: the classic I think of as the Carnegie Deli of ouzeris, the ones in the most intriguing neighborhoods, and the ones with the most provocative food.

“No names, no names,” says Lileta Apotsos, the carefully coiffed owner of Apotsos, ever protective of her customers’ privacy. (The elections have the place humming with politicos from parliament and diplomats from the embassies of nearby Syntagma Square.)

Apotsos’s grandfather opened a grocery store a block from here in 1900, supplying the royal palace and the city’s aristocratic houses with everything from the salamis of Lefkas to marmalade from London. The place evolved almost accidentally: One day a glass of water was proffered to a general waiting for his order; the next day, it was a glass of ouzo. Since it is anathema to Greeks to drink without eating, bits of regga (smoked herring) were soon passed around. The custom grew, and by the time Apotsos’s father took over in 1942, the grocery had become an ouzeri.

Since then, Apotsos has been a no-frills purist’s haunt, known for its authentically Greek mezethes. Perhaps the finest foil to ouzo is saganaki (fried cheese), made here with salty, stretchy sheep’s-milk kefalotyri. Then there’s the puree of yellow split peas and olive oil known as fava, as common in Greece as baked beans once were in America. (This dish is not to be confused either with fava beans or with gigantes—large fava-shaped white beans cooked lazily in tomato sauce with vegetables and herbs.)

At Apotsos, you’ll also find such specialties as deep-fried veal meatballs and fiercely livery feta-stuffed veal spleen, which tastes a lot better than you might expect. On the menu, too, are spicy marinated sausage from Volos, in the north, for instance, and kopanisti—a cheese spread made here from feta and other pungent cheeses from the Cycladic Islands.

“These are the Greek dishes, not Turkish ones,” says Apotsos, with not a little disdain. Cuisine can be as quick a flashpoint as politics around here. Nearly four hundred years of Ottoman rule over Greece (ending in 1827) had a strong impact on the national kitchen, and some of what passes for Greek food is really Turkish in origin, or from another one-time Ottoman possession in the Balkans or the Near East. Such dishes as imam bayildi (onion-stuffed baked eggplant), taramosalata (the gutsy, salty carp roe spread), lamb souvlaki, and kebabs, all probably developed in various parts of the once-vast Turkish empire.

The concept of mezethes, however (despite the fact that the word derives from the Turkish), dates back in Greece at least to Plato, who described a preprandial array of radishes and olives, beans and cheese. There is even mention in ancient texts of sweet cheese pies, perhaps forerunners of tyropittakia, the feta-phyllo squares that are the quintessential Greek appetizer.

Athens is not an easy town to love at first sight. A cacophonous, traffic-filled dustbowl, it virtually defines urban sprawl. But the city begins to reveal its charms as you walk its neighborhoods, especially venerable labyrinths such as Plaka and Monastiraki, in the shadow of the Acropolis, and Kolonaki, which is SoHo and Madison Avenue rolled into one.

Tonight I’m dining at Kafeneio, an ouzeri almost formal enough to be a restaurant, jammed into one of Kolonaki’s tortuous streets. “Stin igia mas (to our health),” says Costas Tsamis, the bartender, pushing a small bottle of Barbayiannis, the champagne of ouzos, in my direction. It was at Kafeneio that I first learned the secret of drinking ouzo. Too many people gulp it the way they would tequila—and come up gasping. Ouzo is meant to be tempered with food—sipped, for instance, between morsels of smoky grilled octopus.

It’s about nine now. Large families and vogueish couples in black are settling into the handsome dining room with its gleaming olivewood bar hung with peppers and mati, enamel charms to ward off the evil eye.

The food at Kafeneio is more creative than at most ouzeris. Owner Elli Theodorou, a serious woman in a chic suit, has a way of crossing traditional Greek elements with up-to-the-minute culinary ideas. (Often at these places the force behind the cuisine is the owner, who perfects the recipes that the staff then cooks.) One specialty of the place, for instance, is a silky potato gratin, enhanced with lemon juice and olive oil. Crunchy marinated raw zucchini salad is a signature dish, in which the squash, a Greek mainstay, is cut into shreds, then tossed with string beans, bits of mushroom, and a veritable avalanche of dill. Classic zucchini fritters take on a special luxuriance here: shredded zucchini, mashed potato, and cheese are cloaked in a tempura batter. Lamb-stuffed lettuce leaves with velvety avgolemono (egg-lemon) sauce is a riff on stuffed grape leaves. More traditional fare is served, too: The deep-fried marithes, brought to the table still sizzling, are superb. And if leek pie happens to be on the menu tonight, I will, in the words of Socrates, be “nearest to the Gods.”

Friday, I go over to Plaka, for lunch at To Gerani, minutes from the site of the ancient Agora—the marketplace where the Epicureans and Stoics once expounded their philosophies. Greek and Roman ruins are everywhere. Given the neighborhood’s weighty past, it is fitting that many of the habitues of To Gerani are leather-sandaled professors and their students, who thrust and parry for hours on the vined terraces. The women in the open kitchen don’t speak English, so it’s point-and-pantomime. A colossal tray of small plates comes my way. There is a traditional octopus stew and fried eggplant wedges, as well as tzatziki, the Balkan dip of garlic, cucumber, and yogurt, and, of course, dolmades. But what always brings me back are the flambes—sausages or regga splashed with an intense orange-scented ouzo and set aflame.

It’s girls’ night out at Gyali Kafenes, an ouzeri back in Kolonaki, with several groups of matrons in suede pants and serious jewelry in evidence. I am sitting at one of the tables under a eucalyptus tree. A smartly turned-out older couple next to me share puffy, blistered saganaki. Meanwhile, Amanda Kanas—who owns the place with Antonio Efstragiatis, formerly a singer of some note—holds court.

Gyali Kafenes is a blend of old and new. There are stark pewlike wood benches against the walls, antiques, copper accents, and bistro-close marble tables. But Kanas’s culinary vision is modern. The food here is spicier than in most Athens ouzeris. (Efstragiatis is from Salonika, in the north, where hot peppers are held in high esteem.) Seafood dominates the menu. Mussels are grilled, deep-fried in a corn-flour crust, or baked with wine, feta, and hot and sweet peppers in a tomato sauce. Shrimp and squid are prepared saganaki-style. Another staple, gavros (a type of sardine), is marinated in vinegar, olive oil, parsley, and garlic, then roasted or grilled. I am always happily amazed, too, by the sausage-shaped Cypriot sheftalies—ground lamb and pork with acres of onion, parsley, and breadcrumbs—served on pita bread that’s been dipped in oil and blistered on the fire. Kanas also does a little more with dessert than is typical at ouzeris. One treat is quinces, glazed in a brew of red wine, cloves, and sugar—like a more aromatic version of baked apples.

The sun is high on Sunday, my last day in Athens. A slow saunter through touristy Monastiraki to the inner reaches of Avyssinia Square—a down-at-the-heels wedge of junk shops that is also a bohemian’s playground—has become for me a ritual of Athens leave-taking.

Ketty Touros, the queenly proprietor of the ouzeri named after the square, chose this locale “because it had challenge.” Awash in blues, greens, and saffron, with chintz-lined walls and a Florentine-style ceiling, Avyssinia is an exotic, eclectic jewel box of a place.

The food is eclectic, too. Touros lived in London for 11 years and traveled the Continent, and alongside her Macedonian specialties—like a tart, fibrous cabbage salad and mussels in their own hot chile-scented juice—are peppery sheep’s brains in black butter sauce, and smoked pork with prunes and escargots. But it’s the eggplant with fresh tomatoes and melted cheeses that I find comforting on this last day.

Like many ouzeris, Avyssinia takes on a different feel at different times. During the week, its tables are filled with ladies who lunch and models blowing smoke rings. On weekends, the customers multiply, and tables sprawl across the square. The mood is rollicking, with rich boys from Kolonaki on their Harleys and Sunday revelers added to the mix, as a dashing accordionist provides background music.

According to Touros, the musician just started coming one day. The hordes followed. Now he gets paid.