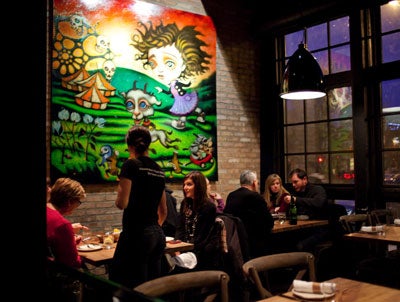 "The space, for starters, is impressive--huge, really, with soaring ceilings and a scattering of polished wood tables that make the place feel more like a party venue than a restaurant. You step inside and get sucked right into a convivial vibe." Back to An Architect of Flavor ». Beth Rooney
SHARE

Stephanie Izard’s pizza doesn’t taste like any pizza I’ve had before, not with its cool drizzle of yogurt and julienne of rapini greens. In fact, in shape and spirit, it’s more like lahmajun, the Turkish flat bread—only Izard’s, which is slathered with a spicy masala sauce, comes with caramelized cipolline onions and tender pieces of smoked goat. It’s crisp in all the right places and piping hot with gooey cheddar, Gouda, and tomme-style cheeses. And it goes against everything I thought I knew about good pizza.

That dish epitomizes what makes Izard’s Girl & the Goat—the Chicago restaurant she opened last July, two years after winning the fourth season of Bravo’s Top Chef—such an interesting place. I first tried it a few months ago, when I went to Chicago specifically to eat. The plan was to revisit a few restaurants I hadn’t been to in years—like Cafe Spiaggia (Tony Mantuano’s less-formal offshoot of Spiaggia), which still turns out some of the city’s best pastas—and to check out several newer places I hadn’t been to yet, like Paul Kahan’s Midwestern gastro pub, Publican (a pork lover’s dream, with the likes of homemade charcuterie, boudin blank, and ham chops). These were good meals. Solid meals. But Girl & the Goat was something else entirely.

I’d never watched Izard on Top Chef, nor had I eaten at her previous restaurant, the 60-seat Scylla in Chicago’s Bucktown neighborhood, which closed in 2007. When I looked at Girl & the Goat’s menu online, it seemed to hopscotch around the globe: much of it was Mediterranean inspired (pappardelle, ravioli), but the ingredients were all over the place (satsuma orange, sea beans) and a sizable number of them played into the nose-to-tail trend of the day. There’d been a lot of hype leading up to the restaurant’s opening, and I had to wonder whether Izard could really pull off a menu like that one. Still, I went with an open mind.

The space, for starters, is impressive—huge, really, with soaring ceilings and a scattering of polished wood tables that make the place feel more like a party venue than a restaurant. You step inside and get sucked right into a convivial vibe. Johnny Cash is playing on the sound system one minute, ’80s New Wave music the next, and the bar that lines one side of the room is packed a few people deep. We hovered around the communal bar table on our first trip and landed four spots, next to a family from the suburbs and a couple of food bloggers from Texas who photographed everything they ate. “Try a fry!” one of the bloggers said, and we did—even my sister, who is not a person known for eating off strangers’ plates. They were incredible: crisp and salty, with a meaty sprinkle of something over top (Izard’s dehydrated powdered ham, I later learned). Dipped into two sauces—a smoky tomato aioli and an insanely delicious cheddar—beer sauce—the batch we ordered went down easily with a hoppy Three Floyds Alpha King, one of the excellent local beers Izard keeps on tap.

This was going to be fun, I could tell already. But there were hints all around that The Goat, as Chicagoans have taken to calling it, is a very serious restaurant. Take, for example, the bustling open kitchen; staffed with more than a dozen cooks, it stretches across the entire back wall, the centerpiece of which is a blazing wood-burning oven that fills the restaurant with a bonfire aroma and imparts a smoky flavor to many of its dishes. And there is Izard—a petite 34-year-old in a neat chef’s coat with her hair pulled back—expediting on the line, walking plates out to tables, and very often stopping to sign autographs and pose for pictures with Top Chef fans. You can see why her clients adore her; she exudes a warm, girl-next-door friendliness. She seems to be doing everything in her power to make sure you’re having a good time.

We ordered more than half the menu that first night; it’s a small-plates menu, so you can do that, right? Not really. These aren’t the kind of noshy, elemental small plates you find at wine bars: each of the 30-plus menu items—which are broken down into the categories Vegetables, Fish, and Meat—is a fully realized dish.

The vegetables we started out with exemplified Izard’s moxie. Blistered pan-fried shishito peppers, earthy with miso vinaigrette, arrived under a blanket of bubbling hot Parmesan cheese and sesame seeds—an absolute umami bomb. There were sauteed green beans, verdant and crisp, tossed with a fish-sauce vinaigrette and a sprinkle of cashew nuts; and a sweet potato gratin, with blue cheese and crispy onions, that tasted like the world’s best casserole. (I wasn’t surprised to learn that Izard has worked for Chicago’s Shawn McClain, chef-owner of the creative vegetarian-centric restaurant Green Zebra.)

When the chickpea fritters came, atop a salad of both raw and crisp-fried garbanzos, goat feta, hazelnut hummus, and nutty romesco sauce, I started to understand why Izard’s food is alluring: she brings the complexity and care you expect to find at higher-end restaurants down to earth. The food is unpretentious, but nothing about it is dumbed down. It’s complicated, with layers of flavor and bold pairings that reach around the world but are never fussy or forced. Even more impressive than the fact that she’s able to keep her dishes so balanced is that she’s dreamed them up at all. Shiitake gelato with chocolate cake? Cauliflower with pickled peppers and mint? How does that happen?

Now, some plates are indeed small; I wanted more than the four fried oysters, each one served with a dollop of egg salad and a salty, crisp-fried caper on top. And the two perfectly seared scallops, their sweetness played up with pumpkin brandade, pomegranate, and fried Brussels sprouts, were so good we ordered another round. But other items could feed a small family, like the roasted lamb shank that comes on a wood board with homemade pita bread and a slew of garnishes: a curried aioli and pickled grapes, crispy onions, and a garlicky feta spread.

It’s with all these little extras that Izard wins you over. Take the breads: each night, baker Greg Wade offers three kinds, and they arrive soft and warm in whole loaf form with their own specially designed butters and spreads. My tablemates and I devoured an entire “Squish Squash” boule—fragrant with acorn squash and served with quince jam and soft maple—walnut butter—in about two minutes.

There are lots of dishes on Izard’s menu that speak to the offal-loving, whole-hog spirit of the day—her hiramasa (amberjack) crudo is dotted with pork belly; her ribs come with a pig’s-ear slaw. But Izard doesn’t revel in the meatiness of these ingredients so much as use them to make a point and counterpoint. Take her “wood-oven-roasted pig face,” which has emerged as a signature: two scrapple-like patties made from seasoned head meat, served with a fried egg, crunchy potato sticks, and bright sauces like tamarind vinaigrette and cilantro oil. When you eat it, you’re less in hog country than you are at an Indian street stall.

And then there’s all that goat. It’s on that pizza, in a homemade sausage, and it forms the base of a delicious slow-cooked sumo, sweetened with gooseberries and rosemary and tossed with homemade pappardelle. When I asked Izard how she’d come to embrace—and name the restaurant after—that ingredient, she explained that the izard is a breed of Pyrenees goat, and that she’d never cooked with it before opening the restaurant. She started reading up on the meat and became fascinated with the myriad ways that cooks in other cultures used it. Now she buys it from a local farm and goes through seven whole goats each week.

It’s that passionate curiosity, combined with her spot-on instincts and real kitchen chops, that makes Izard’s cooking feel so fresh and expansive, and so entirely her own. After a few visits I got the sense that Izard was minting a new form, one that integrated truly global influences with a real omnivore’s creativity. At the same time, there was something inherently Midwestern and friendly about the food, with its more-is-more philosophy and comfort-food appeal. I found myself craving the restaurant once I got back home to New York, and wishing that there were someplace here more like it.