In Toronto's Russian bathhouses, the food is best served steaming 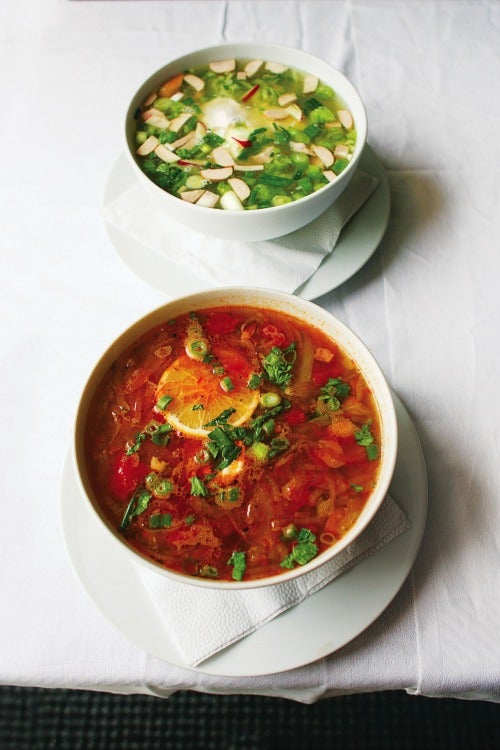 A mix of fresh and cured beef and pork gives this classic sweet and sour soup heft. This recipe first appeared in our March 2013 issue, along with Leah Koenig's article Purifying Pleasures. Get the recipe for Russian Sweet and Sour Beef Soup (Solyanka) ». James Oseland
SHARE

When I first decided to visit South-Western Bathhouse and Tea Room, a banya (Russian for bathhouse) in the Toronto suburb of Mississauga, I fully anticipated the whacking I received with a bundle of birch branches in a sweltering 158-degree room. What I didn’t expect was to be sitting in my bathrobe in an adjoining restaurant devouring some of the best Russian food I’ve ever tasted. But in Toronto, home to tens of thousands of Russian immigrants, banyas have long been known for their excellent Russian home-style cooking. Since opening their bathhouse last year, husband and wife Victor and Valentina Tourianski have fed customers like me such staples as okroshka, a cold soup made with radishes, cucumbers, bologna, and the fermented rye drink kvass; and solyanka, a meaty soup whose sweet and sour broth is flavored with pickles and capers. Patrons wash it all down with homemade mors, a chilled sweet-tart drink made of cranberries and sugar. So good is the food here that the Tourianskis have developed a following of customers who forgo the banya altogether and come just to eat. Valentina is beloved for her sour cream cakes known as smetannik, and layered honey tortes called medovik, and Victor is known for his garlicky borscht. While these foods are satisfying on their own, I’ve learned from experience that they’re best enjoyed after a long hot steam, when they can be consumed with shriveled fingers, and a purified heart.