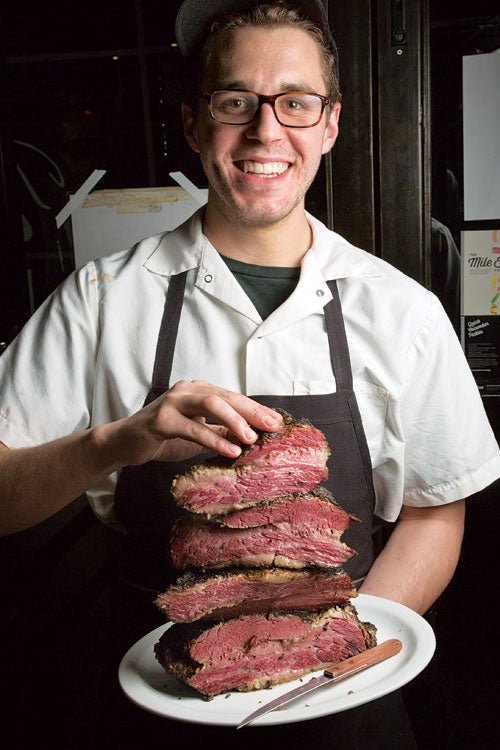 As an ex-Quebecer living in New York City, I couldn’t believe my ears when I heard that a Montreal-style delicatessen would be opening here of all places, the North American mecca for corned beef and pastrami. It takes a lot of chutzpah for a Canadian to introduce, and attempt to convert, devotees of the iconic New York deli sandwich to the comparatively obscure “smoked meat,” a Montreal Jewish specialty of brisket that’s been smoked, cured, and blanketed in a crunchy rub of salt and spice, then steamed, hand-sliced, and shingled onto mustard-moistened rye. It’s a cross between corned beef and pastrami, and, at its best, is better than both.

The restaurant, Mile End Delicatessen, has been open for three years now. During that time, owners Noah Bernamoff and his wife, Rae, have won over New Yorkers with their classical smoked meat steeped in flavors of black pepper, paprika, mustard seed, and more, which Noah spent months perfecting on the rooftop of his Brooklyn apartment. The deli has been so successful that the Bernamoffs have opened Mile End Sandwich in Manhattan and recently published The Mile End Cookbook (Clarkson Potter, 2012), which teaches home cooks how to make the smoked meat themselves.