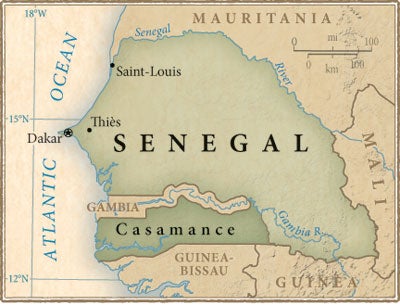 When I was living in Senegal, hitting the highway and getting out into the countryside as often as I could, I was always struck by how radically the landscape changed from point A to point B. In Thies, where I lived, on the edge of the semi-arid Sahel plain, sandstorms sometimes swept into town; we’d suddenly find ourselves half-blind and bumping into lampposts. Yet due south, in the Casamance region, I encountered tropical forests, mangroves, and a lush river delta full of dolphins and white pelicans, and then outside Touba, in east-central Senegal, red lowland savannahs and peanut plantations stretched to the horizon. Although there’s great consistency across the national palate, this varied topography divides the country into three principal regions, each with its own distinct cuisine.

The South: Before France consolidated its colonial rule in the second half of the 19th century, Portugal made inroads in tropical Casamance and helped shape dishes like caldou, a fish soup similar to Portuguese caldeirada de peixe, made with lime, tomatoes, and grilled carp or tilapia. The Diola people have cultivated rice in the river flood plains of this region for centuries, while fonio, an ancient species of millet that was a staple before the French arrived, is now making a comeback thanks to its reputation as a super-grain rich in amino acids. The rainforest, dense with game, supplies dibiteries—roadside butcher shops—which offer delicious grilled game meat like antelope, as well as beef and lamb.

The North: Seafood is abundant in this part of Senegal—from both the Atlantic and the Senegal River—and many of the country’s most beloved dishes, including the fish-and-rice specialty thieboudienne, originated in the former French colonial capital of Saint-Louis. Given its proximity to the Sahara, the north of Senegal shares many features with North African cuisine. Couscous has been produced here from pearl millet by the nomadic Fula group for centuries; in fact, Moroccans may have learned to process and steam couscous from the Fula. From the east, along the border with Mali, where peanut plantations stretch for miles, comes mafe, a thick peanut stew made with chicken or lamb.

Dakar: In Senegal’s cosmopolitan capital, Dakar, the Wolof are the largest ethnic group. As of 1902, this was the capital of all of French West Africa, which accounts for the ubiquity of fresh bread; every neighborhood has its boulangeries. Vietnamese immigrants began arriving in the 1950s, as French colonial Indochina plunged into war, hence the high concentration of Vietnamese restaurants in Dakar. Today, in fact, Senegalese of various ethnicities use Southeast Asian fish sauce as a substitute for traditional umami-boosters like gejj (dried fermented fish), even in the revered national dish thieboudienne.