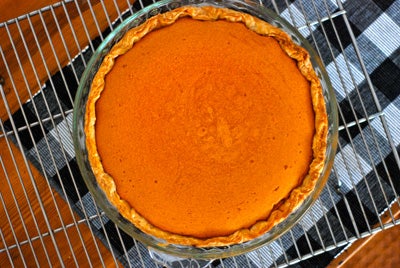 The year I moved to Berlin, I was invited to celebrate Thanksgiving at my friend Kim’s house. Kim, as close to me as a brother, grew up with an American mother and a German father, so he’d been celebrating Thanksgiving all his life. But the year he hosted Thanksgiving dinner with his German wife and their two little boys, there was no turkey on the table at Thanksgiving. No stuffing, no mashed potatoes, no cranberry sauce and no turkey.

Instead, the table groaned under the weight of wild boar, Jerusalem artichokes, sauteed carrots, and a very nice gravy. Still, I couldn’t help but feel deprived. Thanksgiving was the one holiday when I didn’t want to eat a German dinner. I loved celebrating Thanksgiving with my father and his wife in Boston, where there was always a big turkey, my stepmother’s chestnut-sage stuffing, hashed Brussels sprouts that tasted even better the next day, and at least two pies. I saw no reason to ever change anything about it. Even after I moved to Berlin.

Next Thanksgiving, I’ll be in charge, I thought to myself. There will be turkey and stuffing and cranberry sauce. And_no wild boar, even if it is local._

But when Kim called to invite us to Thanksgiving again this year, I didn’t have the guts to tell him that I wanted to stay home and make turkey instead of wild boar, that I craved my good old American feast instead of his funny German hybrid. I felt a little ashamed of my rigidity. There was something so American about it.

The thing is, despite the missing bird and stuffing and cranberry sauce, there had been a whole lot of warmth and happiness at the table last Thanksgiving. There were children squealing in delight, several Germans mooning over the pumpkin pie (reader, I brought that pie, because having no pumpkin pie on Thanksgiving would have been the death of me) and, best of all, a lot of laughter late into the night.

In fact, it had been just as wonderful as Thanksgiving at my father’s house. I even had my dad next to me at dinner that evening, my dad and my mother and my fiance and all these friends who were like family to me. The only person missing was my stepmother, hard at work back in Boston. Thank goodness I’m here, I thought to myself that night, long after our plates were cleared. I’m so happy I’m here.

So I gave up on my menu a few days after the invitation and called Kim to say that of course we’d be joining them again this year. I would bring pie and, if he’d let me, some hashed Brussels sprouts, too.

And wouldn’t you know, he told me we’re having turkey.