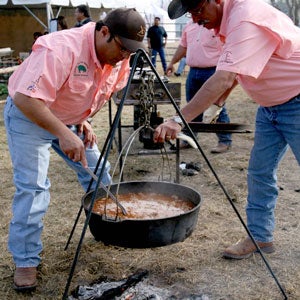 When I pulled in to the grass parking lot behind St. Ann’s Catholic Church in Linn, Texas, a lot of guys in cowboy hats were building fires on the ground. Melissa Guerra, a cookbook author who comes from a ranching family that goes back eight generations in this corner of South Texas, had invited me to be a judge at the 26th annual Linn-San Manuel Cook-Off, the most authentic competition in Texas dedicated to vaquero cooking—Mexican-American cowboy cuisine. It’s also the primary fund-raiser for St. Ann’s and for the school system and fire departments of the towns of Linn and San Manuel.

The vaqueros who rounded up cattle along the border during the late 19th century adopted the practice of grilling meats and cooking food over burning hardwoods. This competition is a celebration of that smoke-scented Tex-Mex legacy. A few feet from Guerra and me, beef ribs were sizzling over mesquite coals. Not far from that, a cabrito (baby goat) was split and splayed over a grate-topped steel box filled with glowing embers. Carne guisada (beef stew) bubbled in an iron pot suspended over a fire pit, which was tended to by two burly guys in matching pink shirts. In another iron pot nearby, chili was simmering, filling the air with the scent of chile piquin, the tiny pepper that grows wild all over southern Texas and is, along with mesquite, essential to vaquero food. I also saw people baking pan de campo, the traditional vaquero flat bread, in cast-iron dutch ovens. One of the fellows who was entered in the fajita category handed me a strip of perfectly seared, medium-rare meat from the center portion of a skirt steak. A far cry from the overdone fajita meat I’ve had at many Tex-Mex joints, it had a juicy, beefy flavor that primed me for what was to come.

The categories in the Linn-San Manuel Cook-Off represent the cornerstones of the cooking style native to the mesquite-dotted deserts and ranchlands straddling the Rio Grande: fajitas, chili, frijoles (beans), cabrito, carne guisada, beef and pork ribs, and baked goods (including a vaquero corn bread often studded with jalapeños and whole corn). Guerra was assigned to judge the desserts and a couple of other categories. Happily, I drew carne guisada and cabrito.

Great carne guisada is made with strips of sirloin seared lightly for color and then simmered in a tomato and jalapeño-flavored gravy. The beef should taste like steak, with a perfectly tender texture, but it shouldn’t fall apart too easily. The sauce should be spicy and thickened just enough that it looks like gravy. Out of a dozen stews, my fellow judges and I narrowed the field to four stellar versions, which we tasted again and again, trying to break the tie.

There were 11 cabritos entered. The best one I tasted had crunchy skin concealing juicy, snow-white loin meat that pulled away from the backbone in long, tender strands. The contrast between the delicate meat of the milk-fed baby goat and the charred tang of the mesquite smoke was unforgettable—a flavor unique to northern Mexico and the Rio Grande Valley. My fellow judges stuck leftover cabrito in shopping bags brought along for the purpose; I cursed my unpreparedness. When I met up with Guerra after the judging, I raved about the cabrito and she raved about pequin jelly.

From where I was standing, it seemed a good, spirited competition, though in truth, Guerra told me, this annual gathering of ranch folk is more of a community feast than a cooking contest. Sure enough, by the time all the judging was over, everybody was still too busy eating to pay much attention to exactly who’d won what.