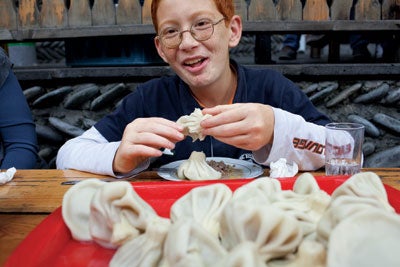 When I moved to Tbilisi, Republic of Georgia, in 2006, I knew I was heading into a year of good eating; the country is famous for its lavish cuisine. But among the veal-and-plum stews and walnut-sauced eggplant, it was the khinkali, the country’s dumplings, that won my heart. The fist-size packets of pleated dough, usually filled with spiced ground lamb and meaty broth, were a revelation. I tried my first one at a countryside feast, where a platter was brought out with great fanfare. We ate them piping hot, slurping lustily to prevent juices from dribbling down our chins. After that, I found them at Tbilisi’s many sakhinkle (literally, “where dumplings are”), casual eateries where khinkal -makers roll out thin rounds of dough, gather the circumference together around the filling, then immerse them in boiling water just long enough for the meat to release its juices. In the city, dumpling houses offer more than just lamb khinkali; there are those stuffed with mushrooms, farmers’ cheese, nettles, and mashed potatoes and dill. But the classic Tbilisi dumpling—and my favorite—is the kalakuri (“city style”), stuffed with a beef-and-pork blend seasoned with cilantro, chile, and onion. Even when I set the doughy top-knot aside, as serious dumpling eaters do, they’re so filling that I rarely finish an order before they get cold. Luckily, there’s a second chance with these dumplings. Send them back to the kitchen, where the cooks will fry them in butter and return them to you, crispy and hot.

See the recipe for Georgian Dumplings »