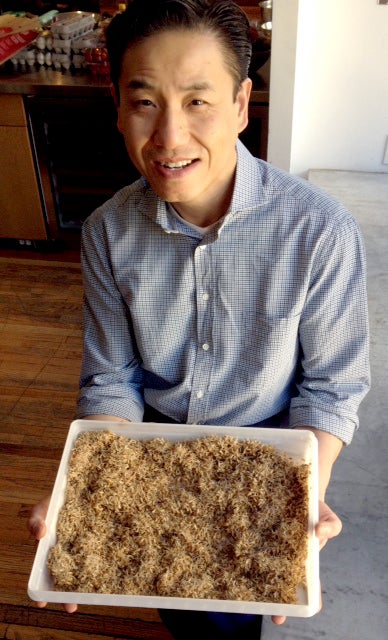 In the SAVEUR test kitchen, we find ourselves playing host to many a great chef who comes in to prepare a beautiful spread for our editorial team, and it’s not infrequent that in the course of these meals, we’re introduced to ingredients with which even we are unfamiliar. Last week, we were delighted to not only meet chefs Andrew Adams and Wally Joe, of the Memphis, Tennessee, restaurant Acre; we were also thrilled to be introduced to a new favorite ingredient: sprouted rye, which they frequently incorporate into their menu thanks to a hydroponic cultivation setup in the attic above their restaurant where they also grow herbs and microgreens.

Barely larger than a grain of rice, the earthy, nutty nuggets begin as rye seeds, or berries. To sprout the seeds, they’re soaked in water for several hours, drained, and then allowed to dry in the sun for two days. During that process, they’re rinsed three times a day, and spread on paper towels or cheese cloth, eventually sprouting golden, thread-like shoots.

Rye sprouts can be used any number of ways, from bread making, to garnishing green and pasta salads, to—as the chefs demonstrated for us—a risotto-style preparation, where their toasted, slightly yeasty aroma become all the more fragrant after a long cook in a hot pan with just the tiniest bit of liquid. Filled with nourishing properties, these malty copper-toned grains were fascinating—but more importantly, they were delicious. By the end of the meal hardly a single sprouted rye grain remained.

Pictured: Chef Wally Joe with a platter of his sprouted-rye risotto