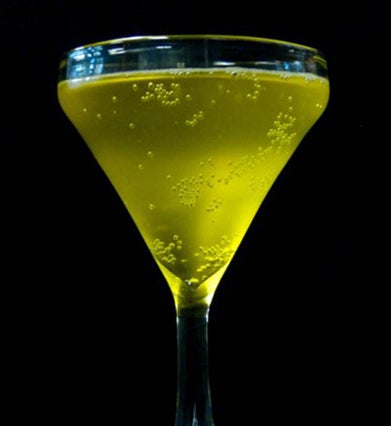  There’s a lot to chew on in Slate’s review of Alison Pearlman’s new book Smart Casual, which takes an academic longview of contemporary high-end dining. In just 145 pages, Pearlman, an art historian, takes on the conspicuous consumption hidden in our obsession with ingredient sourcing, to the labor and class dynamics of the open kitchen, to the self-denying cultural capital that modern deconstructivist cooking calls on us to possess. I can’t wait to get a copy of the book and dive in deeper. —Helen Rosner

 I’ve long followed the experiments of Berkeley-based Cultured Pickle Shop on Twitter, and their recently-launched blog offers an even more complete look into their processes and production. Detailed, insightful explanations are studded with lots of colorful, funky-looking pictures of fermented things: Images of vibrantly golden, bubbling saffron kombucha [pictured] and its culture are fascinating snapshots of their mad-scientist kitchen. —Anna Perling

 What if you had learned the basics of chemistry through cooking instead of sitting in a lecture? Writer Michael Thomsen makes an interesting case for the abolition of grades over at Slate.com, citing several successful schools where student-directed programs have changed the way we learn. —James Oseland

 Facts: Kids like candy. Grown-ups like sex. Writer Mara Wilson’s intriguing hypothesis: Do we stop liking candy when we start liking sex? (And my own corollary question: Is that why people get back into hard candy in a big way when they hit a certain more advanced age?) —Helen Rosner

• If, like us, you’ve got Neapolitan pizza on the brain lately, you might be interested to learn that Italy, the country that first put dough, tomatoes, and mozzarella together, is suddenly looking for a few good “pizzaiuoli”s: If you’ve got a knack for it, you’re willing to learn Italian, and don’t mind relocating, a career change can be in your future.

 This review, in Tablet, of a new biography of 1960s satirical singer Allen Sherman—whose records I grew up listening to (and have committed to memory)—reminded me of all the great food references in his songs. There’s “Hungarian Goulash”; “There is Nothing Like a Lox” (a South Pacific parody); and, my personal favorite, “You Went the Wrong Way, Old King Louis”, which recaps the French Revolution, and includes the highly memorable lines: “you filled your stomach with chop suey / and also crepes suzettes and steaks / and when the people told your wife, Marie that nobody had bread / she said ‘let them eat cake.'” —Karen Shimizu