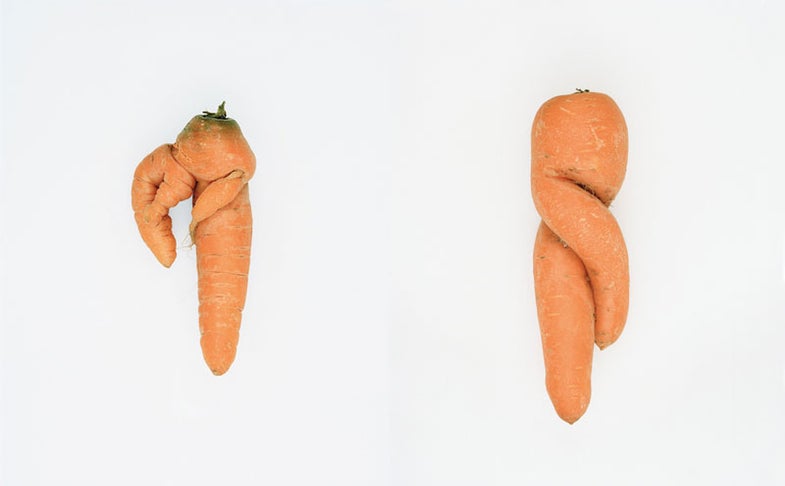 Thanks to consumer preference for symmetrical, attractive produce, lots of less-than-perfect fruits and vegetables never make it to supermarket shelves. In processing plants, a digital optical scanner analyzes vegetables as they fly by on a high-speed conveyer belt and decides which make the cut; if a veggie is just one degree too crooked, it’s fated to be sliced into matchsticks or used in animal feed. Photographer Tim Smyth documented a slew of “defective” carrots (I like to think of them as carrots with personality) to get viewers thining about the relationships between technology, agriculture, and consumer expectations. [Modern Farmer] —Zoe Schaeffer, assistant digital editor, @zschaef

After many decades of losing farmland to housing developments, the US is seeing the beginnings of a trend in the opposite direction: “Agrihoods”—suburban developments that integrate a farm into the community—are on the rise. Many, like Arizona’s Agritopia are up and running, and others are in the works, including Willowsford in Loudon, Virginia, where homes will abut a 300 acre farm and have access to community cooking classes, and Bucking Horse in Fort Collins, Colorado, which will have farm-to-fork restaurants and community gardens for residents. It’s enough to make a girl think about moving back to the ‘burbs. [New York Times; National Geographic] —Karen Shimizu, senior editor, @karemizu

Chicago Tribune reporter Kevin Pang intrepidly purchased and consumed sushi from the drugstore Walgreens, and found it to be on par with standard supermarket-style sushi offerings, “neither unsatisfactory nor earth-shattering.” So, this is the world we live in now: Sushi, not so long ago the exemplar of the exotic and high-end, is now as ubiquitous and unremarkable as a ham sandwich, and you can pick up a pretty decent California roll the next time you stock up on shampoo. [Chicago Tribune] —Helen Rosner, executive digital editor, @hels

It may sound surprising that in Britain, a country widely known for its enjoyment of libations, the latest craze is a new kind of bar—a dry bar. Family members and charities helping those struggling with addiction felt British cities needed this kind of offering added to the nightlife. Bars like The Brink have all the trappings of a typical bar serving alcohol, from live music to creative mixology. To be honest, I’m not even sure I’d miss the champagne in their Shampagne Cocktail, a sparkling blend of elderflower, lime, orange blossom and soda served in a champagne flute. [The Atlantic] —Michellina Jones, site producer, @michellinajones

The holy Muslim month of fasting, Ramadan, starts today, and people around the world are getting creative with the ways they plan to break their first day of fasting when the sun goes down. In Pittsburg, the Syrian-Christian owners of Palmyra are putting out a halal buffet of Levantine favorites like tabouleh, lentil soup, and kibbeh, and the Turkish Cultural Center is presenting a free dinner​ ​series ​for up to 200 people per night featuring specialities like kavurma, fat-braised lamb cubes. [Pittsburgh Post-Gazette] —Felicia Campbell, associate editor, @hungryfi