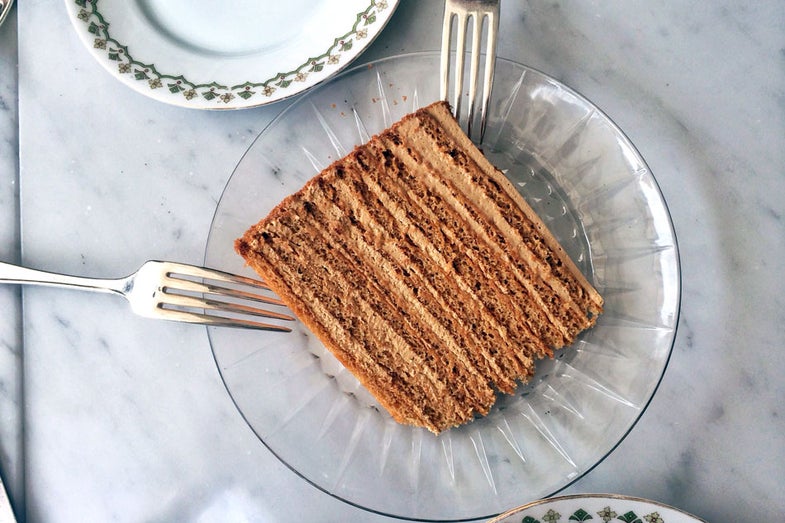 I just returned from a week of gluttony in San Francisco, and I’m still obsessing over the Russian Honey Cake I had at 20th Century Café. Inspired by desserts of Central Europe, this mildly sweet and super moist cake is not only visually striking, but delicious, too. With the cake still so fresh in mind, it was a joy to read about what it takes to build one of these sweet masterpieces created by Michelle Polzine, 20th Century Café’s owner and pastry chef. Chow —Michellina Jones, digital producer, @michellinajones

Joined by Mother Jones food correspondent Tom Philpott, a group of design students got together for an “iconothon”, a brainstorming session to help come up with images that would help food producers communicate such concepts as “grown on an urban farm” and “heritage breed” to consumers. The results of the project—25 spiffy icons free for use—are now available for download. Mother Jones —Karen Shimizu, senior editor, @karemizu

My father’s told me stories of playing hooky as a teenager in the 1960s, hopping the train with his friends from New Haven to New York, and dropping a dollar or two on a hunk of meat at Tad’s Steaks in Times Square. Since I’ve lived in the city I’ve been a few times—some visits with my dad, some without—and the weight of the semi-fast-food steakhouse’s legend more than makes up for the so-so food. I’m not the only fan: Eater’s Robert Sietsema pays homage to the last remaining outpost of what was, at its peak, a thriving mini-chain. Eater —Helen Rosner, executive digital editor, @hels

My entire career was pretty much inspired by the fact that I’ve always liked to play with my food, so I really enjoyed NPR’s Fine Art Food Challenge, where The Salt asked readers to tweet pictures of their food styled like their favorite works of high art. They received everything from a fish dish remade in the image of Frida Kahlo to blackberries arranged like a Malevich painting. [The Salt] —Laura Sant, assistant digital editor, @mizsant

My good friend and sometimes colleague, Sara Cann, took on the enormous challenge of baking a friend’s wedding cake. Here, she reflects on lessons learned during the process, and tips for those dreaming of accomplishing the same feat. [Huffington Post] —Farideh Sadeghin, test kitchen director