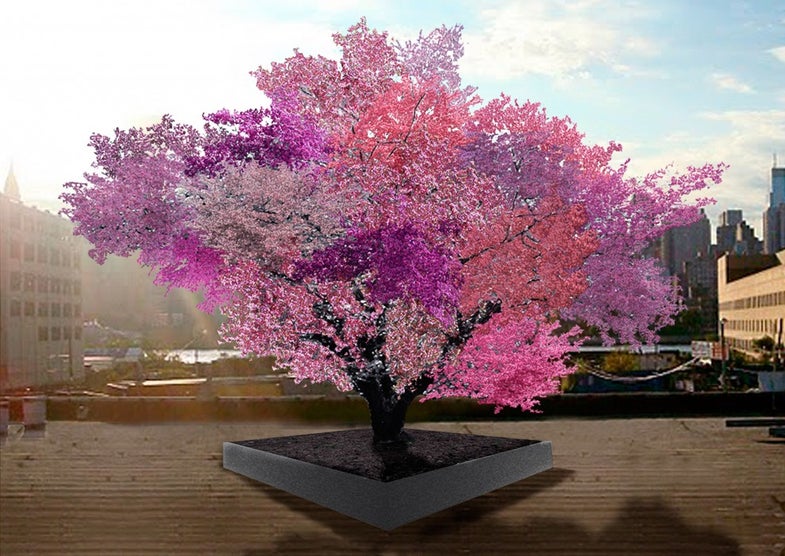 A tree bearing fruit in forty shades of purple seems like a fantastical piece of art, and it is—but one day, it’ll also be a real, growing thing. When artist Sam Van Aken had the idea to graft different fruits onto one tree for a stunning, multicolored effect, he had a near-impossible time finding the varieties necessary to make his project happen. “Tree of 40 Fruit” has since turned into a larger effort to reintroduce forgotten heirloom and antique fruit varieties. [The Salt] —Zoe Schaeffer, assistant digital editor, @zschaef

As a lover of oysters—raw, broiled, or fried—I am all for Washington State governor Jay Inslee, who has been on the stump for climate change, using the case of Pacific Northwest oysters, who are having trouble growing shells hard enough to survive in the increasingly acidified ocean. [NY Times] —Betsy Andrews, executive editor, @betsyandrews

I got a kick out of watching this video of Americans eating Canadian snack foods and commenting on them. My favorite part? One gentleman, trying a nanaimo bar (an intensely sweet Canadian dessert) for the first time, refers to it as “a square of diabetes.” [Buzzfeed] —Farideh Sadeghin, associate test kitchen director, @sadeghin

I still remember the first time I dined with a British friend and listened as he ordered the fill-ut of beef. If you’ve ever had the pleasure of eating with someone from England, you’ll appreciate this list of common foods that Brits and Americans pronounce so differently. [BBC] —Michellina Jones, digital producer, @michellinajones

When we think of the iconic foods of London, fish and chips or bangers and mash might come to mind, but jellied eels are the city’s true signature dish. At Roads and Kingdoms, Stuart Freedman explores the dish’s deep history, and its imperiled future. [Roads & Kingdoms] —Karen Shimizu, senior editor, @karemizu

This week for The New York Times, Melissa Clark wrote an incredible ode to my mentor, Betty Fussell. In it she captures the voice and spirit of the trail blazer of serious food writing, whose vivacious appetite for life continues to inspire me and so many others. Clark included my favorite quote from Betty, spoken about the latter half of Betty’s life: “…I had freedom. I was no longer responsible for anyone but myself. I could do whatever I wanted to do. It was a thrill I’ve never gotten over.” The sentiment perfectly encapsulates Betty’s unwavering sense of adventure, wonder, and curiosity, all of which I hope to emulate in my own life. [NY Times] —Felicia Campbell, associate editor, @hungryfi

On July 22, Washington Post Tehran correspondent Jason Rezaian, and his wife Yeganeh Salehi, also a journalist, were—for no reason anyone can discern—arrested in their Tehran apartment. No one has heard from them since. Anthony Bourdain met the couple a few weeks prior while filming his excellent CNN food-travel-documentary show “Parts Unknown.” Here, he wonders how this happened, and what has become of them. [The Kansas City Star] —Keith Pandolfi, senior editor, @keithpandolfi