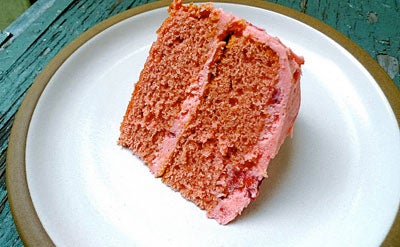 This week’s Sites We Love is Bon Appetempt, where proprietor Amelia Morris takes on some serious challenges in the name of culinary exploration. Whether it’s tackling an obscure, time-consuming recipe or learning family traditions in her Grandma’s all too cluttered kitchen, Amelia shares the whole story and is more than happy to admit it when things don’t go as planned. Here’s what Amelia has to say about her site:

Why is the site called Bon Appetempt? I started this blog after the dramatic, Christmas-day collapse of my first homemade layer cake. My husband and I had been so enamored of the multi-day process required to create this very tall, hyper-ambitious cake that we had taken pictures throughout its evolution. Eventually, while icing the thing, gravity had its way and the layers began to slide. We tried to save it, but it got away from us and fell apart completely. It was kind of a bummer but also really, really fun. When I looked at the magazine version of the cake compared to mine, which ended up in a bowl, I instantly pictured a blog filled with culinary failures, each one right next to the perfect magazine version of what it should have looked like. To me, the name Bon Appetempt captured the spirit of the concept—it said: I’m going for it; I’m expecting failure, but know the process will be worth it. To my friends and me, it’s become a verb, which if used in a sentence, might look something like this:

Matt: Works for me.

What’s been your most popular post? I try not to look at the site metrics. My husband does, but it gives me agita, so, strictly from a gut / number-of-comments perspective, I’d say that the most popular post to date would be In the Kitchen with Grandma, which, coincidentally, won me a Saveur Food Blog Award! It’s a very personal post that took a long time to get right, so I was really pleased that people connected with it.

What’s your favorite post? That’s tough. I have so many! But if pressed… There is the Meyer Lemon Tortilla-Crepe Cake where I do a sort of Kenny Shopsin/Martha Stewart mash-up, using an odd Shopsin technique in a Martha Stewart recipe and then take it in a strange direction by casting the culinary opposites in a modern day foodie version of Pride and Prejudice. And speaking of Shopsin, there is the Shopsin’s Pumpkin Pancakes post, on which Kenny Shopsin (one of my first culinary heroes), actually commented. And speaking of pancakes, there is the Nora Ephron’s Swiss Potato Pancakes post, which includes a video of me flipping a giant potato pancake in a pan for the first time and captures my genuine and unbridled enthusiasm at having pulled it off. Oh, and then, most recently, I spent an afternoon with friends bon appetempting Robyn’s “Call Your Girlfriend” music video, which was a little different from most posts.

What’s something great that you’ve learned or that’s happened to you since starting your blog? It’s difficult to narrow it down to just one thing, considering the fact that this blog has literally taught me how to cook—from what a leek looks like to how to effectively wash one. But the greatest thing that’s happened as a result of the blog is that I now have a space where I can do whatever it is I’m inspired to do. So much of my adult life has been about working to get my writing published, but to get writing published, other people have to say yes. You’ve got to sell them on it, and this approach often affects the creating process in an unhealthy way.

Posting on Bon Appetempt weekly and therefore, making at least one complicated dish a week, has not only reminded me over and over again of the simple yet extremely rewarding cycle of inspiration to tangible outcome (Namely, people eating and enjoying what you just made.), but in a larger sense, it has also given me a place to do what I’ve always wanted to do—to be my own boss, to write about whatever I want, and to publish it without approval (though I always ask my husband for the final edit).

What’s the usual process for developing one of your posts? Bon Appetempt is firmly rooted in the idea of attempting difficult recipes. So, for the most part, I find a recipe that looks both cool and challenging. Then, I make it, photograph the process, eat the results, and write up the experience. Occasionally, when I take a trip or get sick and only eat English-muffin-related meals, this process can change.

What are your favorite ingredients and tools? I love working with yeast and anything that needs to simmer for a long time. As for tools, I could barely survive without gloves for dishwashing and my favorite podcasts—This American Life, All Songs Considered, Fresh Air, and On Being—to listen to while prepping and/or dishwashing.

What are your favorite food and cooking resources? Saveur (Not just saying this. Bon Appetempt is teeming with recipes from Saveur), food blogs, old issues of Gourmet magazine and the recipes that are still online, The Splendid Table, Kenny Shopsin, Elizabeth David, Hugh Fearnley-Whittingstall, Martha Stewart Living, Ina Garten, and my grandma.

What photography equipment do you use? The Bon Appetempt test kitchen is pretty simple. I have but one point and shoot camera, a Lumix LX3, and my husband who always takes much better shots than I do.

Where else can we find your work? Bon Appetempt has been featured on American Public Media’s, The Splendid Table and bonappetit.com . My nonfiction has appeared in The McSweeney’s Joke Book of Book Jokes, etsy.com , and most recently, my essay, Serious Food: In the Kitchen with Grandma, won the 2011 Saveur Food Blog Award for Best Culinary Essay. I’m also currently shopping around my first novel, Will & Margot. Any takers?

What food blogs do you follow? The Wednesday Chef and Lottie + Doof are the first food blogs I really connected with and still follow, and I think it’s because both Luisa and Tim have put so much of themselves into their sites — so much so that I just wrote Luisa and Tim without their last names as if I know them personally when really I’ve never met either! I’m also a huge fan of Korean food, and so when Jeana Sohn and Bo Carney launched Bap Story a few months ago, I was very excited—the kimchi fried rice is a particular favorite. And I also love Heather Taylor’s Chef Speak, which not only always seems to introduce me to some amazing restaurants in L.A. that I hadn’t previously heard of, but each post also includes a recipe from the chef — bonus!