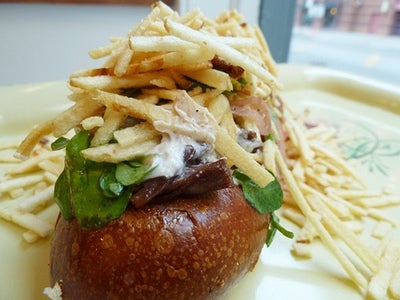 “Chicago is a city with a sky full of bacon,” begins the voiceover that announces each of Michael Gebert’s videos, in-depth documentary shorts about people, products, and cooking that are at the heart of his website. The site, too, is called Sky Full of Bacon, and interspersed among his video work are written entries that run the gamut from meditations on what makes a butcher shop great, to recipe walkthroughs for meaty dishes like Pork Head and Parlsey Pate, to uninhibited writeups of under-the-radar Chicago-area restaurants. Mike’s vast knowledge of his subject (particularly when that subject is pork) is matched by an enthusiastic sense of wonder and appreciation for the culinary bounty of the Midwest, whether he’s tagging along on a fishing boat out on Lake Michigan, or checking out Whiting, Indiana’s annual Pierogi-fest.

Taken on their own, Mike’s videos or the articles are enough to qualify this as a Site We Love, but together in one place it makes for a blog that’s truly great. (Especially his video about the annual Delafield, Wisconsin raccoon feed, which is exactly what it sounds like, and is a national treasure.) Here’s what Mike had to tell us about his site:

Posting rate: The videos are the more serious half of Sky Full of Bacon, 15 to 20 minute mini-documentaries about something to do with food in the most criminally underappreciated food region, the Midwest. Since those need to be a subject weighty enough to justify the time (both mine and the viewer’s), 4 or 5 of those in a year is a good rate— the equivalent of a feature film made entirely by me. The blog is much more casual and offhand, so I try to put something fun to read up at least once a week— eating out, cooking, learning a totally new skill like making jam, just whatever’s going on in my eating life.

Why is the site called Sky Full of Bacon? I figured there were three things that almost everybody loves: chocolate, bacon or beer. And it was the height of the bacon craze [when I started the site], so I started playing with bacon names and that one just popped out, sounding more like an indie band than a website. Occasionally I have to deal with people telling me that bacon is so last year, but they’re wrong. Bacon is eternal and magisterial.

What’s been your most popular post? The most consistently popular video has been the one that went inside La Quercia, the great prosciutto maker in Iowa. Herb and Kathy Eckhouse are just fascinating people, who have achieved this sort of perfect balance between their epicurean and their ethical sides— they make maybe the best prosciutto in the world, and they do it in a way that’s totally principled and decent toward farmers and animals. And it’s so interesting to see something like this that’s absolutely world class in a cornfield in Iowa.

Which, why shouldn’t it be, but we’ve gotten used to the idea of the American heartland being this land of industrial supermarket mediocrity, and they, like some of the cheesemakers in Wisconsin and so on, are fighting that head on by making stuff that’s as good as anywhere in the world.

I’ve never been very good at writing down stuff about raising my kids, but sometimes I post about the meals I have with them, and how they react to stuff, and I know now that that’s the only diary of my kids’ growing up that I would ever write. There’s one about taking my 11-year-old to eat fancy French food after a Little League game, and how he wanted to show me that he was adventurous, that I’m especially fond of.

What’s something great that you’ve learned or that’s happened to you since starting your blog? I’ve learned so much from chefs and other food professionals. Every time I shoot at a kitchen or a farm or wherever I learn something about how to make a pie crust, or how to find the muscle that you make coppa from, or something that I can put to use. I can’t think of one example because it happens all the time.

What’s the usual process for developing one of your posts? I eat somewhere, or I make something and half screw it up.

Where else can we find your work? The main thing right now is that each week I’m doing a video for a chef’s challenge thing called Key Ingredient in the Chicago Reader. It’s sort of like Iron Chef if it was done by Frontline, low on showbiz, big on probing how each chef solves the problem of whatever weird ingredient we’ve thrown at him.

What are your favorite ingredients and tools? Well, gee, what can I say but pork? As Homer Simpson said, it’s a wonderful, magical animal. It was a shame that for 30 or 40 years in America, we had reduced it to a pale white meat which we cooked to rigor mortis, and now we’re rediscovering all the things you can do with it.

What are your favorite food and cooking resources? Paulina Meat Market, the last and best of the old school Chicago butcher shops, the kind of place where you can walk in knowing nothing about how to cook a piece of meat and walk out with precise, dead-on instructions. And my wife’s old copy of Fannie Farmer, which is the only book I grab when I want to make something classic like brownies for my kids.

What videography equipment do you use? I’m so glad you asked that question! This is a big subject for me, because I’m always seeing appeals on Kickstarter for money to start making a documentary, or somebody talking about how they need to raise $100,000 so they can make a feature and get it into Sundance, and you don’t need ANY of that now. A thousand bucks and a desktop computer will get you set up— I have a Canon HV20 video camera, with a wide angle lens because I shoot in tight spots and I like that Coen Brothers fisheye look, and a Rode shotgun microphone. And I have Final Cut Express which is $200 I think— and so for the price of a vacation, basically, I can make movies with it and put them up online for the whole world to see for next to nothing, forever. And so far something like 50,000 people have watched them— how many theatrical documentaries get enough of a release to sell 50,000 tickets? About two a year, maybe.

So for me the question is, why knock yourself out trying to raise money to make one big movie when a relatively modest sum can get you kitted out to go start shooting this afternoon and putting stuff up online the next day? We live in the best of all possible times for that.

What food blogs do you follow? There’s a great community of charcuterie blogs in this area, and I’m always checking to see what guys like Laurence Mate, who has This Little Piggy and runs a charcuterie club, or From Belly to Bacon or Saucisson Mac or Low on the Hog are up to. If you think I do a lot of this stuff, it’s nothing compared to what some of those guys crank out.

Photos and stills by Michael Gebert