Rocas on the Road 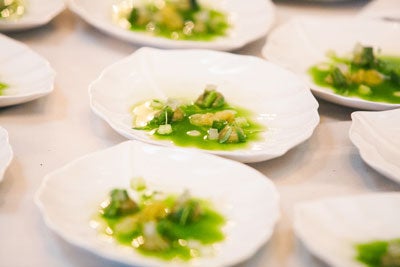 In a pop culture moment when the world’s celebrated chefs are routinely compared to rock stars, the next logical step is to take the show on the road. That’s exactly what the three brothers behind Spain’s El Celler de Can Roca are doing this month, becoming the first Michelin three-star to embark on a multi-country tour.

With financial support from Spanish bank BBVA, Joan Roca (the chef and eldest brother), Josep Roca (the sommelier), and Jordi Roca (the pastry chef) have temporarily shuttered their Cataluña restaurant to serve elaborate tasting menus to guests in six cities throughout the Americas. The tour kicked off last week in Houston and Dallas, and before it ends in September, El Celler de Can Roca will be making stops in Mexico City and Monterrey, Mexico, the Colombian capital of Bogotá, and Lima, Peru.

Although the Rocas have brought along 38 members of their front- and back-of-house staff, they are not replicating their Spanish menu ex situ. With 56 new dishes developed expressly for the tour, the food and drink are tailored to highlight the ingredients and traditions of each country. “The idea is to transform each location into an El Celler that’s unique to that place,” says Josep.

In Dallas this past Saturday, this meant incorporating Tex-Mex influences, as in a velouté of Oaxacan cheese—a decadent soup that blended fermented corn with the mellow cheese to produce the puréed quesadilla of your dreams—and in tender pieces of veal shank served with grilled avocado and two separate sauces, a creamy cheddar reduction and a mild ancho-chile sauce infused with the fragrant notes of cinnamon, coriander, cumin, and oregano.

This being the Rocas, however, the soup was topped with nitrogen-freeze-dried kernels, the veal shank was cooked sous vide, and one of Jordi’s two desserts was a riff on his signature deconstructions of famous perfumes, which tease out the aroma components of scents like Calvin Klein’s Eternity. This time he went the other way, creating a dessert based on a perfume that the Rocas themselves have designed and sell, featuring a lemon compote, tart lemon granita, and gently sweet lemon cupcake ice cream layered over the bright notes of an ethereal bergamot cream. Of course, the richest offering of all appeared during the cocktail reception, when servers handed out plates teeming with freshly sliced_ jamón ibérico_. (The first rule of any Spanish event: There will be ham.)

But the dish that best showcased the elegance and creativity of Can Roca’s cuisine was a chilled soup dubbed “green salad,” a verdant landscape of tomatillo seeds, nopales, avocado crema, and Mescal candies floating in a cucumber-skin juice, accented with a pleasantly bracing jalapeño ice cream. It was the perfect combination of acidity, sweetness, smoke, and spice.

As with any traveling show, each location presents its own logistical challenges. Though the two Dallas meals were staged inside the Rachofsky House—a private residence designed by architect Richard Meier that is home to 800 works of contemporary art—most of the cooking happened off-site or in a tent outdoors, in the 100-plus degree Texas heat. At Houston’s Rienzi, a branch of that city’s Museum of Fine Arts, the waitstaff were limited in what they could carry out at once to prevent any jostling of the art on the walls. (This problem was avoided in Dallas where the pricey pieces were put in storage.)

Given that Can Roca topped Restaurant Magazine’s list of the world’s best for two years running—they were named number one in 2013 and number two in 2014—one wonders why they’d bother with such a complicated undertaking. But that ranking is precisely the point. When you reach the top, where do you go next? “The tour,” says Joan, “is a way for us to step out of our comfort zone and look for new challenges.” If the Dallas dinner was any indication, we can’t wait to see what they do for an encore.