The World of Duck

Cooks across the globe are in love with this versatile, deeply flavored bird 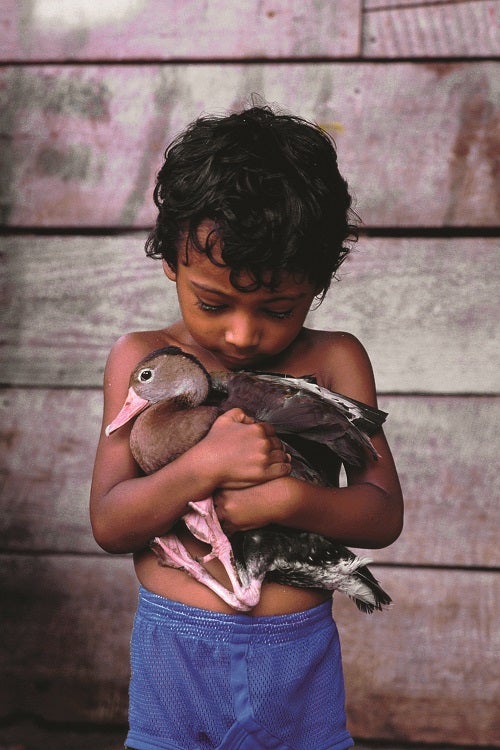 I awoke to the pleasures of duck, that most gloriously fatty of fowl, some 20 years ago at La Tour d’Argent restaurant in Paris. In a borrowed suit, on a friend’s parents’ dime, I ordered the famous restaurant’s signature dish: caneton à la presse, or pressed duckling. I watched, slack-jawed, as the server ceremoniously carved the aiguillettes, or tender breast meat, from a roasted Challandais duck and placed the rest of it in a fearsome-looking silver screw press. He spun the wheel, crushing the carcass and sending the juices down a little spout into a pan set over a flame, to which he added a glass of cognac and another of madeira. He reduced the mixture until it was as thick and dark as chocolate syrup, then poured the sauce over the breast meat and garnished the plate with crisp souffléed potatoes. The dish was as much theater as dinner, but what a dinner it was: The duck had a subtly sweet flavor and a meaty richness that I’d previously only associated with a porterhouse. I never knew a bird could taste like that

Duck is marvelous that way. With its jacket of fat and its firm, red flesh, it appeals to a carnivore’s appetite more than chicken ever could. This has to do, mostly, with the duck’s lifestyle: Unlike chickens, ducks are migratory meaning they’ve evolved to use their bodies for long, difficult journeys. That history of prolonged exertion gives ducks lean, strong muscles, especially those of the hard-working breasts, which have a deep red wine color and almost chewy texture. Duck are waterfowl, so they also need ample fat to insulate their bodies in cold waters. Concentrated mostly in a thick layer under the skin, but also within the liver, that delicious fat is both duck’s siren song and—to anyone who’s tried to roast one only to end up with an overcooked bird and a pan full of smoking fat—its handicap. Speaking as someone who’s survived more than a few runins with burning duck fat, I can avow that this bird rewards the persevering cook with innumerable pleasures.

While France remains my own personal duck Shangri-la—ah, the cassoulets, the magrets, the confits!—my love of the bird runs deep. I adore every one of duck’s global iterations that I’ve tried. And there are many. This vast family of waterfowl, which encompasses dozens of wild and domesticated breeds, has branches on every continent except Antarctica. Its hardiness and versatility—you can eat pretty much the whole duck except its feathers, beak included—have given it a foothold in many of the world’s cuisines, perhaps nowhere more so than the Far East.

Duck’s rich-tasting meat and fatty skin go particularly well with the sweet, sour, and spicy flavors of Southeast Asian foods. A quartered, slow-simmered duck gives depth to kiam chye ark, a restorative sour soup of salted mustard greens and Chinese preserved plums that’s popular in Malaysia and Singapore. On the Indonesian island of Bali, duck is the centerpiece of ceremonial dishes such as bebek betutu, which calls for rubbing a whole bird with a heady blend of ginger, turmeric, galangal, chiles, shrimp paste, and tamarind pulp, encasing it in coconut bark, and cooking it slowly in a terra-cotta pot over flaming rice husks. Janet De Neefe, an Australianborn cookbook author who runs a culinary school on the island, points out that ducks are considered by locals to be repositories of wisdom and are revered for, among other things, their monogamous lifestyle. This may explain why duck is one of the very few meats that Balinese priests will eat. 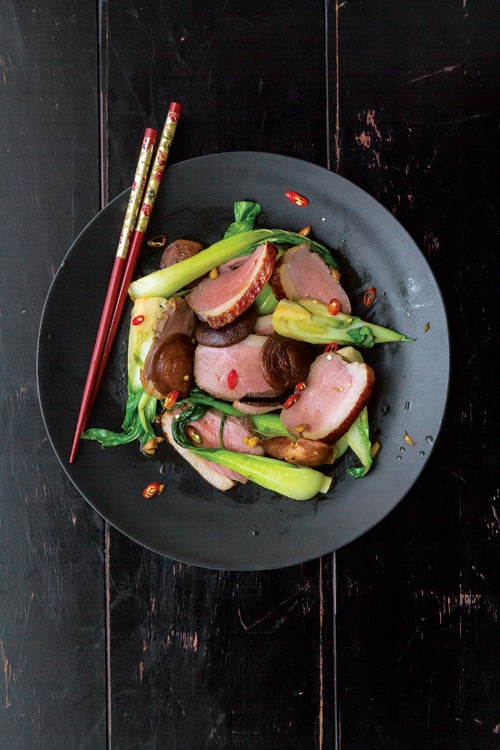 But when it comes to Asia, it would be hard to find people who hold duck in higher esteem than the Chinese. That’s only fitting, considering duck’s long history in China, where they began eating roasted, glazed ducks in the 10th century, during the Northern Song Dynasty’s rule. They later domesticated the wild duck called the mallard, Anas platyrhynchos, and from it bred a meatier white-feathered bird that became known to the world as the Pekin duck. The most common breed in North America, Long Island duck, is descended from the same breed and considered by most cooks and purveyors to be indistinguishable.

The Chinese bestow an almost talismanic value on duck skin, and they’ve come up with ingenious methods to make it as crisp as possible. For the dish called Peking duck—perhaps the best-known duck preparation in the world—the skin is scalded, air is pumped between the fat and the flesh, and the bird is basted in a sugary syrup to create a shiny carapace as it roasts. For the splendid Sichuan specialty known as tea-smoked duck, the bird is marinated for hours in rice wine and tingly Sichuan peppercorns, then gently cooked in a wok over smoldering tea leaves and sometimes other aromatics such as camphor twigs, before being fried in hot oil. The meat, infused with a woodsy smoke and peppery heat, is a masterpiece.

Spinning the globe and moving south, duck also pairs well with the smoky heat and bright acidity of Mexican cuisine. There, duck is called pato, which typically denotes the lean, full-flavored Muscovy duck, a breed indigenous to Central and South America. I had a seminal Mexican duck experience a few years ago in my hometown of Chicago, where local chef and Mexican-food guru Rick Bayless marries the old world practice of slow-cooking duck in its own fat with the Mexican technique of deep-frying meat in lard. The result, duck carnitas, caused my fealty to France to waver dangerously. First, Bayless marinates duck legs in lime juice and oregano, then he braises them in lard, and finally he separates the skin and flesh and fries each separately in more lard until the meat is meltingly tender and the skin is as crisp as chicharrón. That skin is then crumbled over the carnitas in a warm tortilla and topped with a tomatillo-avocado salsa. Fantastic.

Domesticated waterfowl weren’t widely introduced to Europe until the ninth century, though the Romans were early adopters. They plumped up ducks on figs and learned, as the Egyptians had long before them, that the birds’ livers could be creamy delicacies. They also found that if they lightly salted a duck leg, let it cure for a few days, and then cooked it slowly in its own rendered fat, the duck confit could be preserved, miraculously, for months. Duck has stuck around in Italy ever since, perhaps most famously in a comforting Bolognese-like duck sugo, or gravy, that’s often paired with wide ribbons of papparadelle for a hearty dish that can ward off the sharpest winter chill.

Among the Europeans, it’s arguably the French who have embraced duck with the greatest fervor. The canon of duck cookery there is vast, ranging from the rustic casserole of white tarbais beans and duck confit known as cassoulet to the more baroque dish of duck braised inside a pig’s bladder.

Today the most popular duck dish in France, by far, is magret de canard, or quickseared duck breast. Though it’s so well-loved that you’d think it’s been around forever, rare-cooked duck breast is a dish that dates only to the late 1950s, when the French chef André Daguin first tried cooking it like a medium rare steak. Ducks were wrongly considered unsafe to eat unless they were fully cooked, so in an effort to convince diners otherwise, Daguin allowed them to believe the blood-red meat they were enjoying was beef. He didn’t need to keep up the charade for long: By the mid-1960s, rare duck was all the rage, thanks in part to an American journalist, Robert Daley, who wrote a rhapsodic review of Daguin’s specialty in The New York Times. Like many other French specialties that crossed the Atlantic, seared, thinly-sliced duck breast soon became a finedining staple in the United States, too. 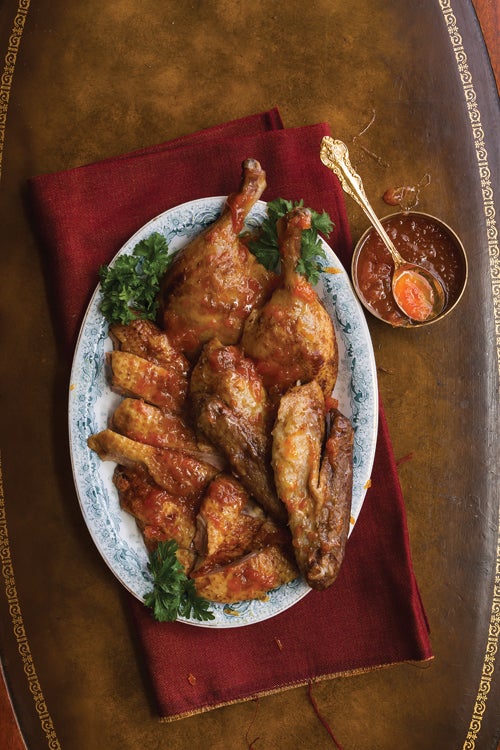 Given duck’s universal appeal, it’s surprising that it’s not more popular in American home kitchens. Perhaps it’s because, short of shooting the fowl ourselves, the only ducks most of us could get until the 1980s, when specialty purveyors like D’Artagnan began selling pasture-raised birds, were frozen and factory-farmed. These days, thankfully, Americans can find fresh ducks at many farmers’ markets, even heritage breeds such as the Rouen, introduced by the French. We can also increasingly find better quality fresh or frozen Pekin or Long Island ducks packaged whole, or as breasts and legs. Other varieties such as the ultra-plump French Moulard, often used to produce foie gras, and the gamier Muscovy can be ordered online.

As for managing all that fat, I’ve learned that in most cases it’s as simple as using a pair of scissors to trim the excess skin from around the cavity and the edges of the thighs, and also controlling the cooking temperature, which should be high enough to crisp the outside of the duck, but low enough to render out the fat slowly without burning it. I always save that leftover fat: It imparts a lacy crispness and mellow flavor to almost anything I fry in it, especially potatoes.

When it comes to cooking duck, keep in mind that it’s more like beef than chicken. “Think of the breast meat as a steak and the rest of the bird as the brisket,” says Hank Shaw, author of the encyclopedic waterfowl cookbook Duck, Duck, Goose (Ten Speed Press, 2013). That is, cook the breast quickly until it’s medium to medium rare, and cook the tougher, fattier legs and thighs low and slow. Most often, I’ve found that this means using a sharp knife to separate the parts of the duck before or during cooking, following the same basic steps I would for a chicken—I just have to cut through more fat.

When I want to serve a whole bird without drying out the breast meat, I stuff the duck’s cavity with herbs and aromatics, truss it, brown it to render some of the fat, and then braise it in wine or stock or a combination of both, before giving it a blast of heat in the oven to crisp the skin. A succulent, golden roast duck like this cries out for a fruity, vinegar-spiked sauce. The one I whip up with mandarin oranges makes for one of the most classic flavor pairings in duck cookery.

But at the risk of sounding like a slavish Francophile, I’d say the ideal gateway to cooking duck at home is making a simple magret. I just season a breast—the meatier Moulard’s is best—with salt and pepper, score the skin, and place the breast skin side down in a dry, cold skillet (this allows more of the fat to render before it starts to brown). Then I light the burner; after 30 seconds or so the fat starts to sizzle, and soon it pools around the breast. Once the skin has turned golden and crisp, I pour off some of the fat, flip the meat, and let it cook until the flesh feels firm to the touch. While it rests, I make a simple pan sauce by softening some minced shallots in the duck fat, then adding stock and alcohol—say a small glass of port or red wine. A few fresh berries won’t hurt either. I cook it all down until it’s thick and syrupy. Finally, I slice the breast thin, spoon on the sauce, dress a green salad, et voilà, I’ve got a princely meal—no duck press required.