It's home to a wealth of information on dishes from around the world — all in videos produced by amateur, enthusiastic cooks. 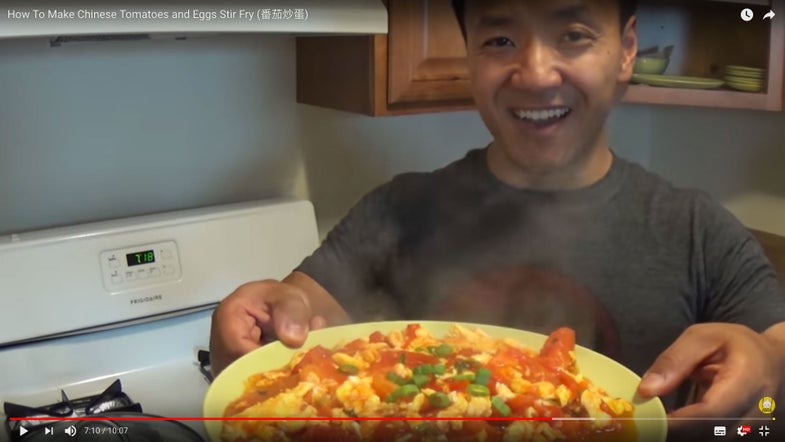 “Hey guys, I’m in a really good mood tonight because it just started to rain,” Mike Chen says to the camera while beating a bowl of eggs. After sharing a tip for how to pick out rogue bits of eggshell, he gives his trick for how to slice the tomatoes while keeping their juices intact. “This is something you want to be careful about, because this dish is really about the tomato juice.”

Chen’s not a TV host. He doesn’t teach classes at a culinary school. He’s part of an army of home cooks who produce their own cooking programs on YouTube. At the host of his of his own channel, Strictly Dumpling (almost 800,000 subscribers at press time), he’s completely unpretentious, reverberates enthusiasm, and will teach you to make a mean plate of Chinese scrambled egg and tomato.

Plenty of ink has been spilled over the ways blogging and social media democratize food knowledge. And as legacy media brands chase video ad revenue to the point of parody, there’s been no shortage of discussion on video’s role in teaching (or failing to teach) people how to cook. It’s strange, then, how little attention the rest of the internet pays to the expansive digital cookbook flourishing under most of our noses: YouTube.

Over the years, the video-sharing website has accumulated a vast library of tutorials on everything from Southern fried turkey necks to homemade Korean condiments, with hosts from India, Ghana, Vietnam, and other countries well outside the usual hubs of Western media attention. They’re often adorably lo-fi—sometimes you can hear the shooter’s kid in the background—and while YouTube’s ad revenue is certainly part of the appeal, most programs are hardly what you would call commercial.

The best of the lot share a wealth of technical and cultural insight, with visual and narrative elements that demystify difficult and unfamiliar preparations, all from the perspective of the home cook—a world away from the cheese-pulling hands over bowls chasing viral Facebook success without a lick of genuine advice. Collectively, they form the greatest compendium of cooking knowledge the world has ever seen.

Global cookbooks are a dime a dozen these days, and food blogs give curious cooks access to pretty much any dish on Earth, but both formats are still limited by a written language barrier. Not so on YouTube. “[YouTubers] show all these things that recipe writers and professional chefs take for granted,” says cookbook author and recipe developer Ben Mims, who’s worked in test kitchens at Food & Wine, Food Network, Munchies, and SAVEUR.

“Everywhere I’ve worked,” he goes on, “people have these ideas about the best way to write a recipe. What’s better, more accurate, more descriptive. But in the end, if you watch someone cook, that’s 10 times easier than reading someone’s writing.”

For Mims, who routinely translates tricky techniques to new audiences, YouTube has been invaluable. “Whenever I’d get a recipe that called for a method I’d never heard of before, I could read about it in cookbooks, but it was so easy to hop on YouTube, and there’d be a grandmother making kulfi. It demystifies the whole process.”

Compared to the studied performance of the perfect Instagram dinner snapshot, YouTube’s collection of recipes function as a community cookbook for the modern age, an anthropological log of how people really eat. And no dish is too obscure, even if it’s the kind of everyday cooking that rarely catches media’s fickle eye.

Take gari soakings, a popular West African sweet cassava porridge thickened with fresh or canned milk and adorned with coconut and peanuts. It’s delicious, but basically dorm food, not the kind of splashy dish you’d read about in a glossy magazine.

A Google search for gari soakings yields a mere 272,000 results, the first page of which includes hard-to-follow recipes mixed with a couple outraged articles about an Accra hotel upselling the cheap dish. Hop over to YouTube and you find a half dozen video tutorials you can jump into right away. Want to make Balkan ajvar spread instead? YouTube has 5,000 options for you. Curry laksa? 50,000 regional variations.

“I’ve watched a few [videos], usually to gather data about a type of recipe, or observe a technique in process to note any visual cues,” says New York Times writer Tejal Rao. “My favorites within the genre involve rural cooks shooting with their phones, in places like India,” such as a granny named Mastanamma, whose watermelon chicken video has been watched over 10 million times (her bread omelet dish has almost hit 5 million). On her page, Country Foods, she is billed as the “world’s oldest YouTuber.”

And as you might expect from someone with that title, Mastanamma’s cooking is not watered down for a broader audience.

“In most cases,” Rao continues, “they’re making their own cooking shows without the editing and production and substitutions and caveats and apologies that American food media might offer if they were filtering their cooking. They tell their stories however they like, which is so cool.”

The strangest part of food YouTube might be its comment section. On a platform plagued with some of the worst commenters on the internet (to mention just one problem), feedback on the site’s cooking videos is…really nice.

On Chen’s tomato and egg video, one commenter writes, “your future wife is gonna be so lucky to have a chef husband like you!!” Another compared the dish to a Polish recipe for fried tomatoes with eggs and onions, which prompted a third to say they have the same dish in Venezuela (where it’s called perico).

What’s remarkable isn’t just the positivity, but how frequent it is. YouTube’s broad reach and recirculation algorithms mean popular videos get more feedback than almost all food blogs, which in turn means more follow-up questions, like whether you should remove chicken skin when making pho ga, or if can replace wheat flour with alternatives for steamed buns.

Smart YouTubers know how to invite good feedback by sharing family and cultural links. In a video by Angel Wong about her grandmother’s daikon radish and pork rib soup, one commenter chimes in, “my mom always make this for me, super warming!” Another thanked Wong, who offered simple tips like buying thicker daikon radishes, “because they’re sweeter for use in soup.”

How far does that goodwill go? In the case of Maangchi, a Korean home cook who’s become YouTube’s breakout food star, fans have created their own subtitle tracks in Greek, French, Vietnamese Korean, Indonesian, and other languages, making her cooking tips even more accessible. They’re also teaching each other. The comment section of her kimchi episode (4 million views and counting) has become a forum for viewers to share dishes that, like kimchi, are benchmark foods of their cultures: jollof rice in Ghana, jerk in Jamaica.

It’s hard to imagine such jovial discussion in the comments of a big-deal Instagrammer’s polished snapshot, or on a unicorn food Facebook meme page. But the homegrown ethos of amateur video is the perfect environment for it to grow.

Maangchi is food YouTube’s reigning queen. Charismatic and charming, she’s been making videos since 2007, and her fame led up to a cookbook in 2015. With over 2 million subscribers, her videos regularly receive hundreds of thousands of views, sometimes upwards of a million, on episodes teaching viewers how to make honey-butter Korean fried chicken and crab stew, as well as detailed techniques for breaking down whole chickens and fermenting the soybean paste called doenjang.

She takes a familiar tone, describing dishes in superlatives like “amazingly tasty,” and quipping, “see you tomorrow” after explaining how soybeans need to be fermented overnight. And her episodes can run to TV lengths; that doenjang tutorial clocks in 26 minutes. Her production values are also, relatively speaking, pretty high, with crisp, well-mixed audio, multiple cameras, vivid lighting, and full makeup. But the magic of YouTube is that you don’t need any of those trappings to reach a sizable audience, even if it’s an order of magnitude lower than Maangchi’s.

On Manjula’s Kitchen (over 450,000 subscribers), the camera work isn’t as pretty, but people can’t get enough of Manjula’s patient, deliberate instructions from her actual home kitchen. Like most food YouTubers, her episodes typically net views in the low to medium five figures—a fraction of the audience BuzzFeed’s Tasty commands, but still sizeable.

But like Maangchi, Angel Wong, and Mike Chen, she’s the kind of charming person who, if you know her in real life, you’d hope would invite you over for dinner. Without the distractions of high production values, Manjula and her peers drill down into nuance.

In Maangchi’s doenjang tutorial, she goes into a cute, weird aside about bacteria. When you see white specks on your soybeans, that’s the bacteria at work, and as she puts it, they’re a prelude to becoming rich. (Also, you know, that your doenjang is going well.) And for someone committed to the lengthy process of making her own fermented soybean paste, she’s also refreshingly practical about the choice between using a mortar and pestle or food processor to mash the beans. “Which one do you think I will use?” she asks as she dumps the long-cooked soybeans into the food processor. “Make my life more easier!”

It’s the way she talks lovingly about the bacteria like it’s a pet (“I’m going to show you something very exciting thing inside. Something is blooming, I want to show you!”) and or when she’s picking out the bad soybeans and superimposes “Me. Kernel, U came to the wrong address! :)” over the video. She seems genuinely fascinated by her bacteria. In turn, we become fascinated by them too. And in a media landscape increasingly governed by metrics and algorithms, that earnestness is all the more refreshing.

Adom Home Cooking
The channel is sporadically updated these days, but provides lessons on how to prepare everyday Ghanaian dishes.

Angel Wong’s Kitchen
Her videos are concise (and have higher productions like Maangchi), but she has a knack for working practical tips in seamlessly, has an approachable style that makes you feel like you’re learning along with her, and prints recipes on a companion blog.

Apé Amma
This popular Sri Lankan channel’s videos aren’t in English the processes are clearly and thoroughly shot and there are often recipe cards and important instructions in English — and the host’s voice is paired with soothing music, making watching extremely pleasant.

Country Foods
The “world’s oldest YouTuber”, Mastanamma’s videos are beamed out to the world from rural India — and they’re wildly popular.

Manjula
Her explanations of Indian vegetarian food are indepth without weighing it down and careful, so that you don’t miss a detail.

T-Roy Cooks
Born in Baton Rouge, Louisana but a longtime resident of Austin, Troy’s has a Southern charm that isn’t caricature and covers Southern cuisines (Cajun, barbecue, Texan food) and “whatever else I feel like cooking”.