For These Buddhist Monks on the Morning Rice Run, Food is a Sacred Contract 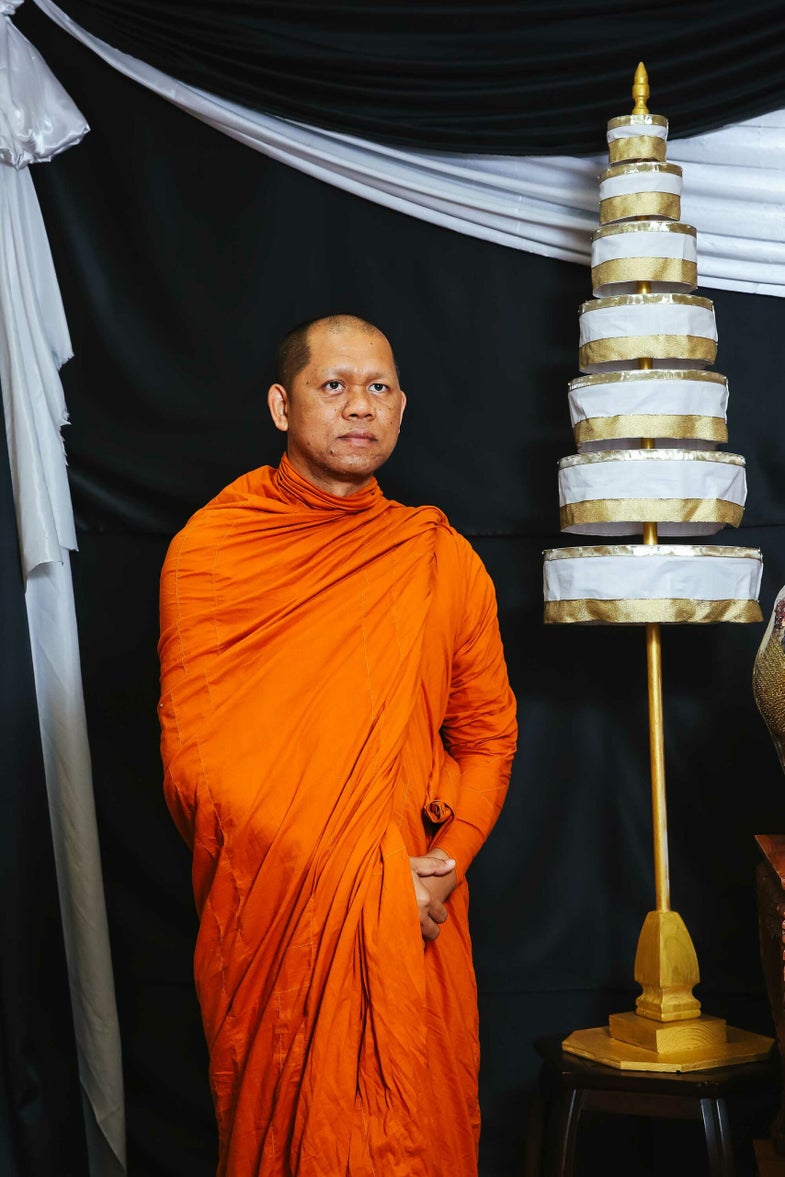 These monks are fast. Wrapped in orange robes, they snake through a sea of parkas that surge toward the subway at a steady clip, carrying only deep, cloth-clad steel bowls strapped around their shoulders. It’s 7:30 a.m. on a chilly October day in Elmhurst, Queens, and the monks—known as bhikkus in the Theravada Buddhist tradition—are on their daily alms-round, collecting food from local devotees.

Small groups wait patiently—outside a grocery store or two-family house or simply on a street corner—taking turns when the monks arrive to fill their bowls with plastic containers of rice and curries, drinks, fruit, or whatever else they may have to offer. Monks cannot request specific types of food, nor even thank the devotees; instead, they offer a brief blessing before quickly moving on.

The alms-round is an enduring and critical practice in the Theravada tradition, the second-largest school of Buddhist thought that counts roughly 125 million followers globally. In Luang Prabang, Laos, hundreds of monks gather at dawn each day to silently collect food from the community. The ritual has become so famous that it’s now an attraction for tourists. But in New York City, where public displays of religious devotion are about as rare as vacant parking spaces, the daily alms-round might go on completely unnoticed to non-Buddhists, were it not for those whorls of orange fabric cutting through the swell of commuters.

In Elmhurst, home to one of the city’s densest Thai populations, there are plenty of devotees if you know where to look, and Buddhist temples, too. These monks hail from the nearby Wat Buddha Thai Thavorn Varanam, which looks as though a Thai temple dropped from the sky onto an 80s-era row house. With its golden-gabled roof and elaborate finials garnishing a drab brick facade, the temple stands in stark relief to neighboring apartment buildings on the middle of a quiet residential street.

Budi explains that the lay people use the food collected each day to prepare as well. Monks typically only eat two meals daily, and are forbidden from consuming solid food after noon and until sunrise the following day.

Theravada Buddhist monks act in accordance with a number of rules, the stringency of which being one of the things that distinguishes Theravada—the dominant form of the religion in Thailand, Sri Lanka, Myanmar, Cambodia, and Laos—from other branches of Buddhism. The Patimokkha, the monastic code comprised by more than 200 rules of conduct for monks and more than 300 for nuns, outlines the dos and dont’s of everything from ejaculation (forbidden, but wet dreams are okay) to how one should properly eat (without smacking one’s lips, taking huge bites, or licking one’s fingers).

The Patimokkha also forbids monks from cooking, working, handling money of any kind, or telling people how to donate it. The monks essentially commit to becoming helpless, relying entirely on the laity—hence the volunteers—in order to survive.

When someone leaves his family to become a novice monk, “now you have no job, no salary,” says Tsawin Puksao, the abbot of Wat Buddha Thai Thavorn Varanam. Because their lives revolve almost entirely around the temple, it’s critical that the monks go out each day to interact with the community. “If we don’t go collect the food, who [will] know we need it?”

The abbot adds that there is an evangelical aspect to the alms-round as well. “[People] say, ‘What is this? Why are they doing that?’ And then they are interested in coming [to the temple].”

As for the kind of food that the monks receive, Tsawin says it makes no difference to them. “We don’t mind American food, Thai food, Chinese food, or Italian food. You have to make yourself comfortable with living with the people.” Monks can’t be picky, although in this part of Queens—where it’s easy to pick up Colombian obleas on one corner and Pakistani snacks across the street—they are hardly lacking options.

At the temple, a kitchen volunteer describes the relationship as “a contract between the monks and the community.” Devotees are expected to look after the needs of monks and nuns—providing food, clothing, medicine and shelter, or material support—while the monks give guidance and serve as exemplary models of behavior.

Budi, the young monk, says that when a layperson makes a donation of any kind, he recites a verse that promises them beauty, longevity, happiness, and strength in return. “You get something back,” he says. “You get a share of it.” Food becomes a vehicle for spiritual enrichment, and a direct connection to one’s community leaders.

But whether they’re lining up in Luang Prabang or dodging subway grates in Queens, the monks primarily see food as just food—a necessity that many of us take for granted, one that the monks could satisfy but choose not to so that, as the abbot says, they may continue unabated “to practice meditation, to teach the Dhamma.”