Just walk in, pick up what you want, and walk out through the scanner 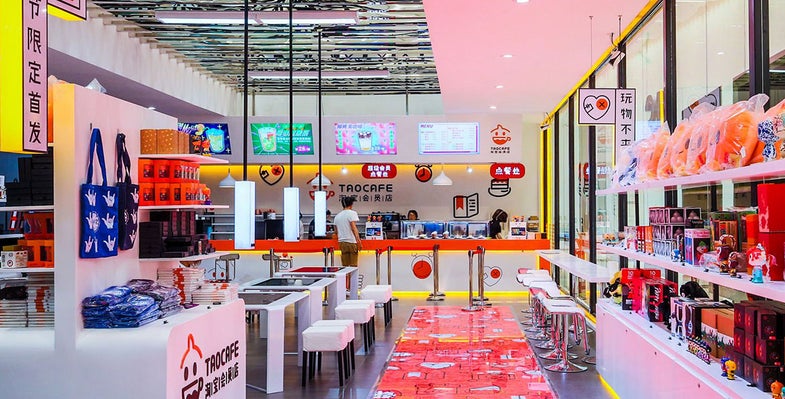 It must feel so criminal—walk into a grocery store, pick items off the shelves, put them straight into your bag, and walk out without stopping by any kind of cash register. But every item is digitally tagged, so you’ll be scanned on your way out, get charged, and receive an electronic receipt.

This is now reality in Hangzhou and a few other select Chinese cities. Alibaba, a Chinese e-commerce company that is also world’s largest retailer, just opened its first cashier-free store and café earlier this month. As you walk through gates, you scan a mobile app and start shopping. The store carries basic everyday items, toys, and groceries. From the café counter, you can order beverages and fast food by saying your order out loud to a screen. The screen will scan your face to know who to charge and give you an estimated waiting time. That facial recognition technology pops up again as you scan yourself out to make sure the right person is charged for what they’ve bought.

China is not the first country to introduce this concept; South Korea has a similar concept as well as popular virtual grocery stores where you “pick up” virtual groceries by scanning their QR codes, then get the real thing delivered to your door. And Amazon Go introduced the concept to the U.S. at the end of last year with a pilot storefront in Seattle. But China is leading the game. In June, Chinese start-up BingoBox opened its first self-service 24-hour convenience store in Shanghai, and has a handful more now open and running. According to Tech in Asia, BingoBox is planning to open 5,000 stores by the end of 2017.

Alibaba is also planning to expand its business with $15 million in investments, reports China Daily. Alibaba intends to cut the price for its goods by 20 to 30 percent, compared to other convenience stores, in part by drastically reducing staffing costs: only four staff members are needed to run around 40 stores, a potentially major cause for concern for grocery workers in the service sector, as these technologies spread.

In addition to cutting labor costs, the new scanners will render an earlier generation of technology obsolete as well: the self-service checkout kiosks that turn even honest customers into shoplifters.