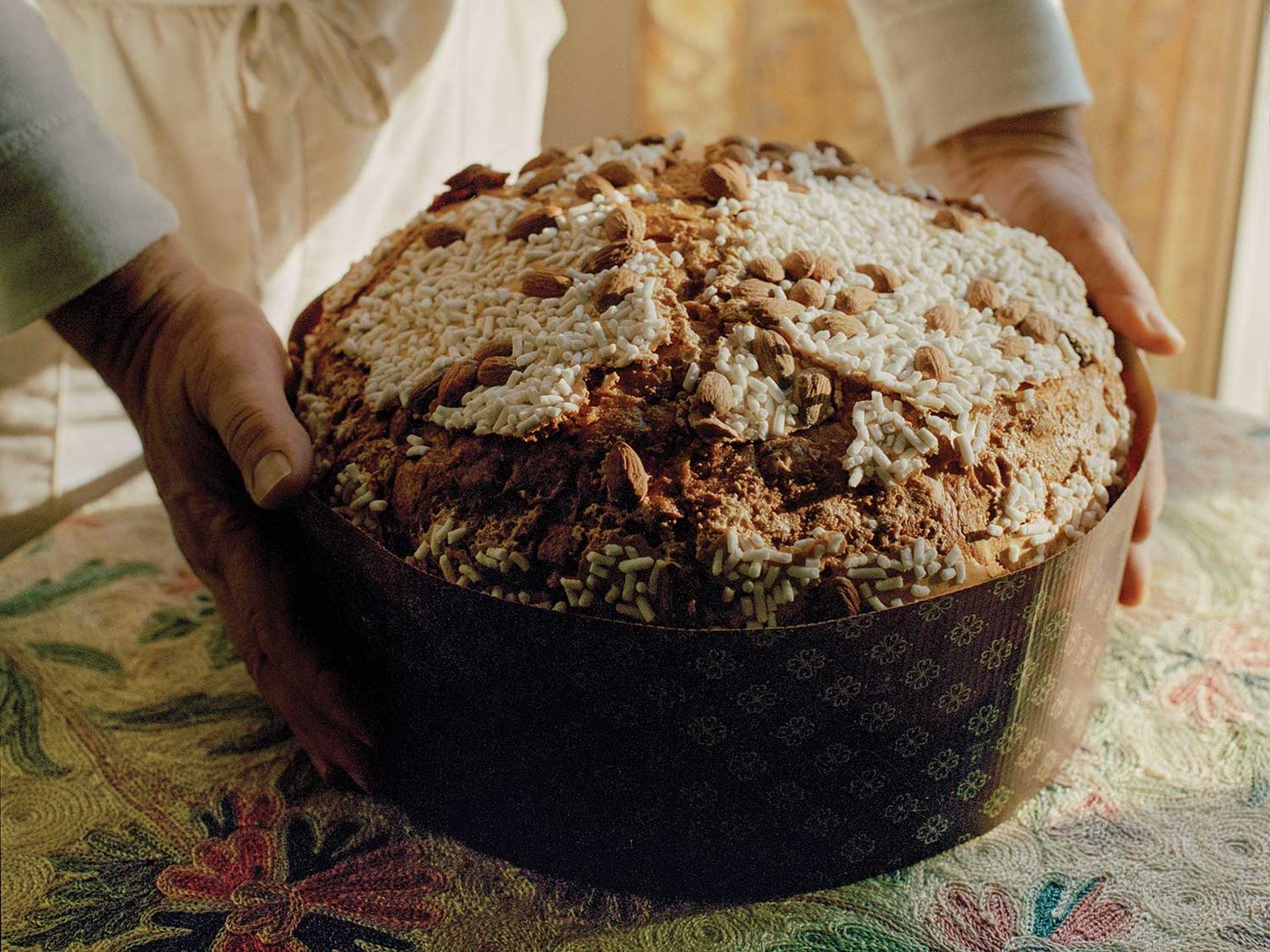 It always smells like Christmas in Pinerolo. Whatever the month, visitors to this little Piedmontese town 30 miles southwest of Turin are greeted by the season’s essential olfactory cues as soon as they arrive—baking spices, candied fruit, the slow rise of buttery dough. These seem to be in the very pores of the place, and it’s no wonder: Since 1922, Pinerolo has been home to Galup, a bakery-factory that specializes in northern Italian enriched breads, an operation that defines this small town—from its aroma to its employment options.

It is mid-November, and the area’s smaller bakeries have just begun their year’s panettone making, readying for the seasonal wave of customers. But Galup has kept a steady pace—they make panettone (and other enriched breads, like pandoro and colomba di pasqua) year-round, though as elsewhere, the fall sees their production skyrocket in anticipation of the holiday season. Head of packaging, Ombretta Sana, tells me they are now making up to 6,000 loaves each day, which is set to increase to 10,000 in December. (Galup’s workforce, usually 25, triples between September and February.) As I wander around the factory, the uniformed workers in white hair nets move hurriedly at each stage of the production line, from mixing to wrapping, giving the place a Santa’s workshop kind of mystique.

Panettone—the golden, fruit-freckled, egg-yellow bread of northern Italy—has become a winter mainstay across the entire boot. Stories abound about its roots, a favorite being that it is pane di Tonio (Tony’s bread), the result of an experiment made by a brilliant medieval court chef who had nothing to serve for Christmas dessert. In fact, says Italian food writer Stanislao Porzio, panettone is more likely related to a whole category of enriched breads popularly eaten for Italian religious feasts during the Middle Ages. Prized ingredients—good eggs, butter, and dried fruit—were added to bread dough to create something regal and festive.

Dough is poured to be portioned; loaves fresh out of the oven; the finished product. Elena Heatherwick

Those original loaves likely resembled the style found in Milan today: unfrosted and in a tall, rounded cylinder, like a chef’s hat. (In Turin, you’ll find panettone basso, a lower, squat round, decorated with a slick of egg white, sugar crystals, and, often, hazelnuts.) Italians will slice and eat panettone for breakfast on Christmas Eve or Christmas Day, or as a dessert alongside ice cream. They are largely purists with their panettone, I learned, but some deviants cover slices of it with maraschino or cognac, then top it with whipped cream, for a more cake-like presentation.

Every winter, Italy produces nearly two loaves per every resident, many for international export. The country does more than $50 million of panettone business in the U.S. alone. (Galup is available Stateside through Eataly stores.) But for a product so widely distributed, traditionally made panettoni are shockingly uncommercial, filled with expensive ingredients and time-consuming to make. In Pinerolo, little expense is spared on the quality of ingredients: candied citrus from Calabria and Sicily; fat sultanas from Turkey or Australia, soaked in marsala wine; Piedmontese hazelnuts for dusting; the best Italian milk, butter, eggs; and farina forte, a strong, specially formulated 00 flour.

Galup’s production line is a sea of midcentury machinery, supervised by a workforce that has been here for decades. Elena Heatherwick

The most important ingredient, however, is free: The bread must be fermented with local wild yeasts, which are responsible for the great variations in quality among brands and makers. At Galup, the pasta madre—”mother” yeast—is a descendant of the bakery’s original from 1922, and has been fed with flour and water every four hours ever since. “It’s not just a yeast,” bakery owner Giuseppe Bernocco says. “It’s our yeast.”

loaves rest upside down to keep the crown from caving in. Elena Heatherwick

Panettone is widely considered to be among the most difficult products for a baker to master, an art form rather than a mere bread. Industrial and artisanal renditions alike require two levitaziones—two distinct stints of rising to get the dough to swell and the resulting bread to its trademark pillowy texture. The best ones also call for a fine balance of timings, temperatures, pHs, and techniques. Earlier in my trip, Andrea Perino, of cult artisanal bakery Perino Vesco in Turin, told me his process takes 40 hours in total; in small bakeries like this, one session will yield just 60 or so breads, at most.

As his giant electric mixer massaged a bundle of stretchy yellow dough between its long, elbowed arms, he added another tub’s worth of butter, then a container of yolks, then more butter, and then more yolks. Just when I thought no more could possibly be added to what looked like an absurdly rich, golden dough churning in the mixer, another mound of ingredients would fall in to be combined. (Almost half of the average panettone’s volume is butter.) This extensive kneading creates a network of gluten, a web through which the yeast pushes up to give the bread its bounce, which in turn deposits its crowning proliferation of fruit on top.

Left: Ida Badino works on the machine that portions the dough. Top Right: Ombretta Sana, head of packaging. Bottom Right: A photo from the Galup HQ archives—the leaders have changed, but the product largely has not. Elena Heatherwick

Mechanization is essential, given the volume that a place like Galup needs to produce. The production line is a sea of midcentury machinery supervised by a workforce that, in many cases, has been here for decades; it’s a curious mix of the mechanized and the handmade. A giant vat of dough is tipped slowly into another container before being divided into individual paper wrappers. Ida Badino is one of three people who operate the machine responsible for spezzatura, cutting out the loaves. She has worked here for 44 years and controls the size and weight of each ball of dough—reminiscent in shape and color, I can’t help but think, of a yellow Labrador puppy—and makes sure that each dollop hurtling up the spinning belt is uniform in proportion. Armies of panettoni then march through a giant oven. Each 2-pound bread needs an hour at around 350°F to reach precisely 194° in the center, the temperature that the company feels best ensures a light, golden, and pillowy dough. It is baked and then cooled upside down to prevent its crown from caving in on itself.

There’s a sense of everything rising: the dough, the fruit, the heat, the scent, and the Alps that tower above the town. On the road above Pinerolo, the light is soft and gauzy, as though diffused by a piece of tulle. The snowcapped peak of Monte Viso looms in the distance, a reminder of Christmas’ imminence. The air smells sweet up here too.