How Conveyor Belt Sushi Took Over the World

Kaiten-sushi and the art of automated gratification 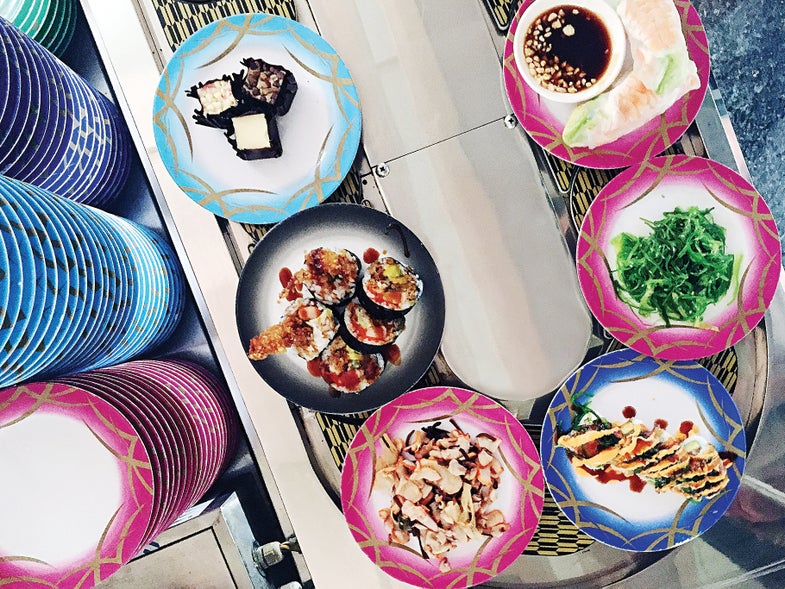 Some of the best ideas arise from a desire for more money earned in less time—and are possibly fueled by alcohol. Such was the case with conveyor-belt sushi, or kaiten-sushi, a worldwide yet underrated dining phenomenon that embodies everything about the Way We Eat Now: reasonably nutritious food served in an inexpensive, inclusive way that requires no special knowledge while employing of-the-minute technology, a frictionless commerce model, and a sense of dining as entertainment suitable for all ages.

Here’s how it began: In 1947, Osaka restaurateur Yoshiaki Shiraishi visited an Asahi factory and observed a winding stream of beer bottles floating across the brewery’s filling floor on a conveyor belt. How many more customers could he serve at his stand-up sushi bar, he wondered, if he were to install such a contraption?

In collaboration with an Osaka machine shop, Shiraishi spent years refining his first conveyor. For the system to handle corners gracefully, he worked on fan-shaped belt parts, and swapped round plates for traditional rectangular sushi dishes, which were prone to logjamming. In 1958, Shiraishi opened Mawaru Genroku, the world’s first kaiten-sushi restaurant. He patented the sushi conveyor and began to franchise the concept locally, then mounted what was essentially a kaiten-sushi pop-up at the 1970 Osaka World Expo, introducing this new form of casual dining to Japan at a time when Western fast-food brands had just begun to infiltrate a market driven by a growing need for ever greater efficiency. At its peak, Mawaru Genroku operated 250 outlets in Japan. (Eleven remain today, including the original Osaka location.)

Kaiten-sushi took off in Japan in the mid 1970s, when Shiraishi’s original patent on the conveyor belt expired, allowing imitators to enter the market. As the nation’s economy cooled in the 1990s, interest in the form grew again, and kaiten-sushi chains also began to expand into Asia, Europe, and the Americas.

Despite an international reputation as exclusive, special-occasion food, Japanese sushi is no stranger to casual dining. Beginning in the mid-1600s, vinegar-seasoned balls of rice topped with cooked or preserved fish were a low-cost snack sold from street carts and stalls. After World War II, occupying U.S. authorities outlawed the stalls, driving sushi indoors and out of the hands of the Japanese working class. Kaiten-sushi, with its transparent low pricing, quick service, and casual nature, returned it to them on a conveyor belt that now stretches across the globe.

In his 2013 book, Kaiten-Sushi Saves the World, Nobuo Yonekawa, a business consultant whose company, name translates to “The Cheering Party for Kaiten-Sushi,” writes, “The master sushi chef has so much authority that customers are forced to follow his rules…. customers’ requests are completely rejected.” By contrast, he explains, “At a kaiten-sushi restaurant, we can control our eating experience and choose the sushi we wish to eat.” Long before the advent of taxi-hailing and food-delivery apps, kaiten-sushi harnessed technology to provide customers a smooth and personalized experience.

“Kaiten-sushi is not gourmet,” says Yukari Sakamoto, who leads Tokyo food tours and wrote the guidebook Food Sake Tokyo. “But it’s very cheap and a good choice for a casual meal out with family and friends.”

And like the long-gone Horn & Hardart Automats or an individual jukebox in your diner booth, kaiten-sushi is fun. There’s a Wonka-esque thrill and a sense of near infinite possibility at seeing the range of sushi rumble by on the conveyor, there for the taking, with no judgments about that firecracker fried chicken rainbow roll. High-end sushi is about watching in reverent silence as the chef crafts each piece with his hands, and about following the prescribed rules of etiquette so as not to appear a rube. Kaiten-sushi is about rice delivered by a robot, the flamboyant use of Kewpie mayonnaise, and onigiri tarted up to look like pandas or cats.

Most kaiten-sushi restaurants also allow you to place individual orders with the sushi chef or, increasingly, via tablet or touch screen; your food then arrives on a dedicated “express track,” inevitably atop a model car, boat, or miniature Shinkansen, Japan’s famed bullet train. The tab is calculated by counting the number of plates, which are color-coded to indicate prices. Some chains now have RFID tags embedded in each plate, and electronic wands to add up the bill. At others, you send plates through waterslide-like slots at each seat for washing and counting; your able busing diligence is rewarded with video games on the touch screen.

Some of these new additions may be the conveyor belt’s eventual downfall. Sakamoto explains that, in order to cut down on food waste, most newer kaiten-sushi restaurants have completely forgone the belt, using only express tracks and custom orders, and older restaurants are phasing out their existing conveyors. “People want their fish cut to order, as fresh as possible, while still enjoying the fun and value of kaiten-sushi,” she says. “This is the future of fast-food sushi.”