A Visit to the Best Little Spice Shop in Cambridge

Sansho and other spices at Curio 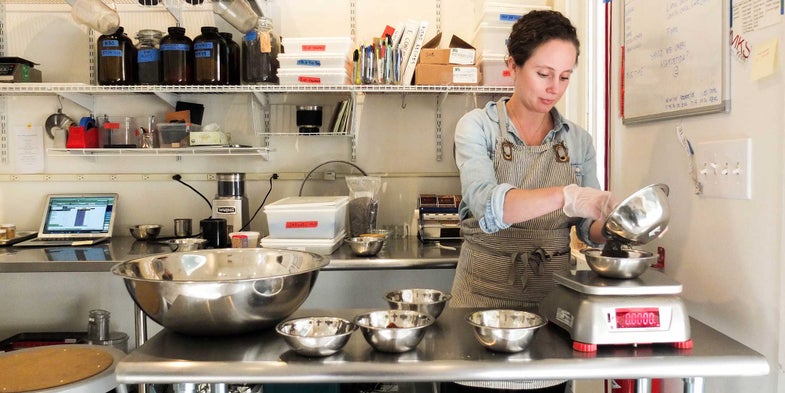 On a Monday morning last fall in in Cambridge, Massachusetts, a group of inquisitive visitors to Curio Spice Co. stood in a semi-circle and passed around small jars of spices. Many of the offerings were familiar to the group: they work together at Oleana, one of the country’s foremost Middle Eastern restaurants, and they know their coriander from their cardamom. But then a new jar circulated and, one by one, like a string of old Christmas lights illuminating bulb-by-bulb, everyone’s facial expression changed: eyebrows arched, eyes widened. This was something new. “It’s like stars on my tongue!” someone exclaimed. “It’s like Szechuan Froot Loops!” offered another. It was sansho pepper, the electrifying Japanese cousin of Szechuan pepper, which tingles taste buds with bright, citrusy heat. Most common in Japan as a counterpoint to sweet, fatty unagi, sansho is not well known in the U.S, at least for now.

Presiding over this ceremony was the gently smiling Claire Cheney, who founded Curio in 2015 and opened it as a brick-and-mortar shop a year later. Her store is a curiosity cabinet stocked with familiar and unfamiliar herbs, spices, and accessories from New England and way beyond-Greek mastic, Maine sea salt, Madagascar wild voatsiperifery pepper, mortars and pestles, pepper grinders. One of Claire’s wisdom teeth is displayed in the shop as decoration; somehow it doesn’t look out of place.

The shelves at Curio Luke Pyenson

Cheney has been interested in spices since she was the Local Foods Coordinator at Oberlin College’s student-run co-op. She became particularly enamored of saffron, going so far as to self-published a book on the crimson threads. Later, she worked as a manager at Oleana herself (and its sister cafe, Sofra), where here she was slinging sumac before Ottolenghi was a household name. All of this exposure to spices alongside previous experience in the specialty coffee industry got her thinking: do those who go out of their way to buy fair-trade coffee and single-origin chocolate do the same for spices? And even if they wanted to, could they?

Sensing a hole in the spice industry, Claire moved to Bangkok in late 2013, where she lived for roughly half a year, traveling throughout the region to develop relationships with small spice producers. It was this trip that provided the framework, both logistical and ideological, for Curio. She got to know cinnamon, turmeric, and mace growers in Sri Lanka and visited Kampot pepper farmers in Cambodia. When she came back to the U.S., she set to work crafting spice blends influenced by her travels, using ingredients largely sourced directly from small farms-organic and female-owned whenever possible. The small, light-filled shop on a busy Cambridge thoroughfare followed, as with further sourcing trips, including Japan, for that sansho pepper. Which brings us back to the semi-circle.

The Oleana staff came for a general spice tutorial, smelling, sampling, and asking questions, and Cheney was a fount of information, speaking passionately about seeds, pods, and berries the way others discuss wine. She proved points about freshness and terroir by offering side-by-side sniffs of two paprikas, one produced in southern Massachusetts and the other in California; so stark was the difference that they could almost be different products entirely. She then produced a pair of Sri Lankan turmerics, one pre-ground, the other processed in-house from dried slices of the bright orange rhizome. It was no surprise which was the more fragrant of the two.

Cheney’s riff on togarashi strays from tradition, yet pays homage to the spirit of experimentation she found in Wakayama, where Sansyou’s husband-and-wife owners tinker with unusual blends and funky applications of their crop. Her first tastes of the farm’s sansho came, unexpectedly, mixed into lemonade and sprinkled atop Camembert. She says she left the farm with new relationships, sourcing partners, products and, most importantly, inspiration. Selling individual spices is an important part of what Cheney does, but, she says “I think there’s a certain amount of whimsical creativity that is really fun about spice blends.”

The back of Curio’s modest storefront is where Cheney does all the toasting, grinding, packaging, and labeling for her own blends. First in the grinder for the Edo blend went the sansho and orange peel, the combination of which released an unbelievable sharp citrus scent through the whole store. In a large mixing bowl, they were then joined by the remainder of the constituent parts. It was a colorful, playful mix, combining spices sourced ethically and directly from a small family-owned farm with ingredients from around the world, plus a nod to New England—a perfect distillation of all that Cheney wants you to explore.