Plus more dessert mad science know-how from Dana Cree, the author of Hello, My Name is Ice Cream 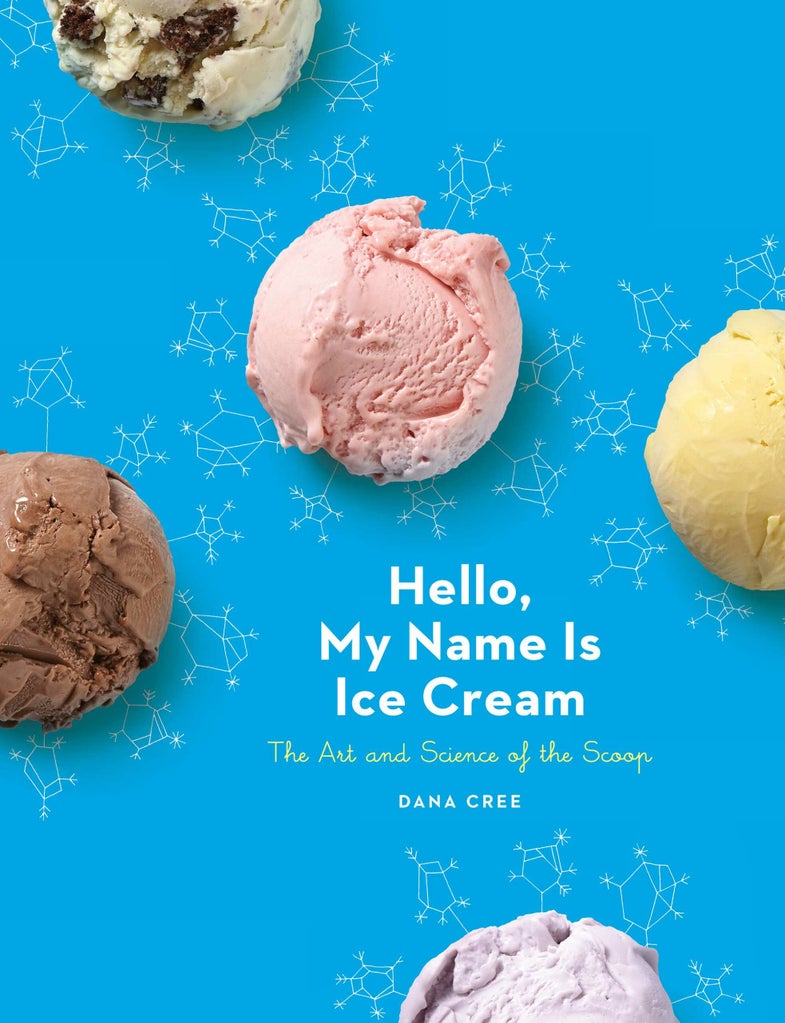 In the tiny world of ice cream nerdom, Dana Cree is one of the best and brightest minds. Beyond her work as the executive pastry chef of Chicago’s One Off restaurant group, which includes the beloved Publican, she’s also the creator of The Pastry Department, a group blog (and SAVEUR Blog Awards winner) that’s home to some of the smartest writing on dessert anywhere. Ice cream isn’t the only topic she covers there, but you can tell it’s what gets her neurons firing. And now she’s collected that knowledge in one volume for you.

Unlike seemingly every other ice cream cookbook that’s come out in recent years, Hello, My Name is Ice Cream isn’t a brand extension of a scoop shop or private label. Think of it more like a single-subject edition of Modernist Cuisine, or a biochem textbook where the at-home exercises reward you with incredible dessert.

Where other ice cream books are all about novel flavors and exotic mix-ins, Cree’s text focuses on the fundamentals: What exactly goes into making the perfect scoop of ice cream? What are the variables, and how can we control them? How does ice cream even work?

She has recipes, of course, and flavors like Portofino Cherry Chunk and Tangerine Dreams are delicious mixes of new and classic. But the real brilliance—and joy—of this book is the unrestrained nerdiness, the breathless enthusiasm to share every possible gram of ice cream know-how with you.

As someone who’s written tens of thousands of words about ice cream, and developed a hundred-plus recipes, I can say with no exaggeration that I learned something new on every page of Cree’s book. Which is why I wanted to sit down and pick her brain: What is ice cream, really? What should we know about it that we don’t? And what’s the deal with locust bean gum, anyway?

Hello, My Name is Ice Cream on Amazon. Clarkson Potter

You’re coming from a professional background. When it comes to ice cream, what are home cooks missing out on?
I don’t think home cooks are really ever taught what the components of ice cream are: The way ice crystallizes; the way butterfat functions to both absorb flavor and trap air; the way sugar both sweetens and binds with water to help keep the ice cream soft, or control the softness of the ice cream; and then the way protein works to knit the whole structure together.

Understanding what ice cream is helps you figure out why something is going wrong. If it comes out too soft, I can go back and say, Maybe I need to adjust the sugar. Or I can go into the sugar section of the book and see that the honey I substituted for sugar is high in fructose, which is a monosaccharide, which binds with twice as much water as regular sugar. And I can then say, There, that’s why.

It’s interesting that this information isn’t that commonly available. This is a time when gluten is a household word, not just because of allergies, but because people are writing about its function in pie and pizza dough. Why’s that technical knowledge missing from ice cream writing?
Goodness, I don’t know, but I sure am lucky that I got to write about it. Maybe because ice cream is so complex. And a lot of the books attached to existing brands have been a way to share popular flavors. Without a brand to tie into, I wanted to give home cooks as much information as possible to make the ice cream of their dreams.

Some people say you can’t make professional quality ice cream with home tools. Do you think that’s accurate?
It’s true that you are at a mechanical disadvantage in the home. The best texture of ice cream comes from churning it as fast as possible and then hardening it as fast as possible, and professional machines that can do that in a matter of minutes in rooms that are so cold they can freeze ice cream in two hours.

But if you know what you’re up against with home machines, you can design an ice cream base that gives you similar results. It’s less a limitation than an opportunity to try something different. So there’s less water in the bases that I developed for the home cook. There’s more fat, and then there’s a whole section on stabilizers.

Let’s talk about stabilizers, which get a bad rep in most ice cream writing.
One of the most common questions I get is, “Why is my homemade ice cream always icy?” One of the answers is water. I really, really encourage home cooks to use at least one of the stabilizers I mention to help bind up some of that water and keep it stable, because home freezers are so inefficient.

A stabilizer is just an ingredient that holds water in place and keeps the ice crystals the same size, rather than enlarging by melting and freezing. It can be as simple as fruit pectin or egg yolks. Gelatin is the original stabilizer. There are a lot of familiar ingredients that we have in our cupboards that can be used as stabilizers. And then there are very efficient plant-based gums that come from natural sources and have been used for thousands of years.

Take locust bean gum, which sounds like a Biblical plague, but it comes from the carob plant. If we put carob in our cookies as a substitute for chocolate, we’re super-healthy hippies. So I’m not sure why using another part of the plant makes us big evil stabilizer people.

We’ve talked a bit about improving ice cream base and churning it—what about freezing it?
One trick I found while working on the book was to freeze your ice cream inside the removable churning bowl of your ice cream maker. After churning a batch, the canister won’t be cold enough to make ice cream, but it’ll still be very cold, so rinse it out and wipe it down, and then you have a nice little cold cavern inside of your freezer to give the ice cream a head start.

Otherwise my best piece of advice is whatever you do, do not put the ice cream on the door of the freezer. Just tuck it away in the far back and try to keep people out of it for a little while.

Your book has separate chapters on custard and eggless (Philadelphia) ice creams. Why’d you divide them that way?
Maybe I just have a brain that compartmentalizes things, but for me I thought it was really important to show people exactly what each discipline was in ice cream, how they were balanced differently, and then why I choose those particular styles to express different flavors.

A custard ice cream has the extra added richness of egg yolk, and it does have a bit of an eggy quality to it. Some flavors work really well with that: brown sugar, big robust spices, coffee. But Philadelphia ice cream is pure dairy. It’s a cleaner flavor, and for me, that’s best for fresh herbs and citrus and mint.

In restaurants, whenever we made an ice cream for a dish, it wasn’t a standalone piece; it had to marry into a flavor profile. So we would often say, Should this flavor be a custard or a Philadelphia base, or frozen yogurt or sorbet, and oftentimes we would try each one. I like to think through that process, the creative freedom of being able to play in multiple sandboxes.

You have a whole chapter on frozen yogurt, too.
Somewhere along the line, frozen yogurt stopped being ice cream made with yogurt and started being low-fat soft-serve goop that you can inject into a cup and cover with toppings. Which has its place, don’t get me wrong. But people don’t realize that when you pull all the fat out of something, you have to add something back with flavor, and it always has more sugar. It ends up being just as bad for you, if not worse.

So I wanted people to champion what I consider proper frozen yogurt. Nice hard, scoopable, ice cream made with the flavor of yogurt. When I go to Freiburg, Germany and visit my sister and we go to the ice cream shop, I always get the yogurt ice cream with cherries in it. It’s just always mixed in there with the other flavors.

I want to talk about the art of the book for a minute. The Knowledge section at the beginning looks very much like a textbook, with narrow columns and molecular diagrams. But then the recipes explode with these delightful photos that have layers of illustrations and watercolors. What did you want the art to say to readers?
Ice cream isn’t like steak or salad. With a scoop of ice cream, you don’t have any context for what it is or what’s in it. So I wanted to find a creative and visually appealing way to add context and emotion to these ice creams that combined illustration and typography.

Andrea D’Agosto, the photographer, and Anna Posey, the illustrator, and I were able to have a three-day field trip in California with the whole photography team, and we basically said, Let’s make something we’ve never seen before. We had a bunch of ice cream books there, and my rule was that if we see it in the book, let’s think of something else.

I hope this book has a long lifespan, and that it will be there for you as your curiosity and knowledge grow over time. So I wanted to create a visual style that felt fresh but would also live on. Really melty ice cream shots and upside-down cones are beautiful to look at right now, but in ten years, I’m not sure we’ll feel the same way.

How else do you want this book to live on?
After I wrote the book, I built a website called What’s Your Flavor for readers to post photos of their ice cream and talk about what they’re making with the book. Part of it is selfish—I just wanted to see what people would do. But I also want people to be able to talk with each other and ask me questions if something goes wrong, to create a community of ice cream makers.

Do you have any other thoughts on how people can do that?
If you flip to the very, very last page of the book, after the appendix, there’s a recipe for cake made with melted ice cream. Because as someone who’s made a lot of ice cream and failed so frequently, I don’t want people to think that their work is a total loss if the ice cream doesn’t turn out right.