What the English Really Ate on the First Thanksgiving 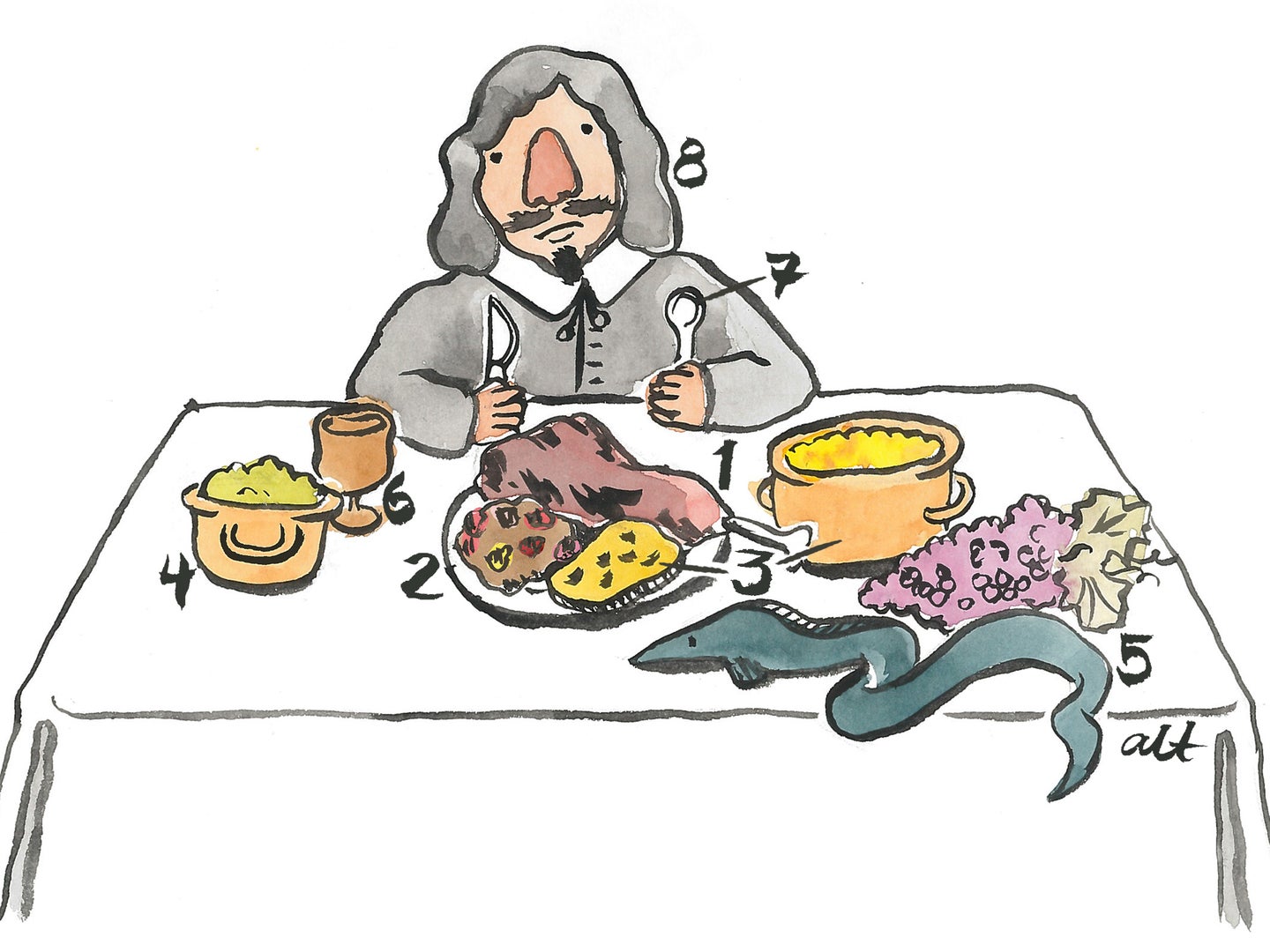 There are more unknowns than knowns when it comes to the menu at the first Thanksgiving in 1621. We know there was venison, and probably some wild fowl, but that’s about it. And how did it taste? Probably not that great. As feasts go, the first Thanksgiving, with its corn mush, boiled greens, and bland stewed meat, was likely an ample but plain meal that’d have few of us modern Americans giving thanks.

Most of the holiday’s modern “traditional” staples, such as stuffing, pie, and mashed potatoes, were completely absent from that first festive meal. To find out what else was on that table, we consulted letters, contemporary cookbooks, and historians like Kathleen Wall, the great Colonial Foodways Historian at Plimoth Plantation. The answers are below; follow along from the numbers in the illustration above.

1) Venison: Pretty much the only thing we know for sure about the first Thanksgiving is that the headlining animal wasn’t turkey, but deer. (A letter dated a few months after the feast in 1621 notes that Native Americans brought five of the animals.) The haunches, shoulders and ribs would have probably been roasted over an open flame.

2) Stew: The English had a lot of wild fowl to cook, as well as a bunch of deer parts that weren’t roasted. Some of that meat would have been stewed in water with root vegetables grown from seeds brought over from England, planted earlier in the spring. Think radishes, turnips, and carrots—but only red, yellow, white, and black carrots, not the orange kind. (Orange carrots, a Dutch innovation, were SO continental in the 17th century that they were just a novelty to English folks.) The stew would have been spiced, perhaps, with the most popular flavorings of the time: mustard (the ketchup of the 17th century) and vinegar, both of which the English would have brought with them from the Old World. Vinegar, carrot, and duck stew anyone?

3) Corn: Having just harvested a good amount of corn, the English would have ground it up and cooked it in hot water to make a big bowl of Colonial-era grits, or they might have cooked the corn meal mush on a griddle over a fire to make a proto-Johnnycake.

4) Greens: Cabbage and collards, most likely. Boiled, of course, in the finest English tradition. Yum.

5) Wild foods: The English would have foraged for some wild foods as well, like grapes, which were in season in New England then. And they would have fished, too. Eel was big in the Massachusetts Bay, and was likely part of the meal.

6) Drinks: Water. Crisp, fresh, spring water. No wine, no beer (they could have made it out of barley, had they not just harvested their crop), and rum, tea, and coffee hadn’t made it to New England by 1621 yet. So nothing but water.

7) The table settings: The English would have brought wooden or pewter spoons and knives with them, and likely laid out a white linen or damask tablecloth, which was probably more valuable than the table underneath.

8) Dessert: Our merry Englishman would have had no dessert to look forward to because there was no dessert course in 1621. Sugar, if they had any left from their voyage, would have been sprinkled on the savory courses throughout the meal to make them festive and fancier. So no pie (there was no wheat flour anyway, probably), no cookies, no cakes.

As for other conspicuously absent dishes:

Mashed potatoes: Potatoes, a New World food, were introduced to Europe by 1620, but not yet big in the English diet. The English were far more intrigued by artichokes.

Brussels Sprouts and Green Beans: Brussels sprouts were a continental novelty (like orange carrots), and green beans are immature beans—the English wouldn’t have harvested their beans early; they would have let them fully mature.

Stuffing: There was no wheat flour at the time, so no bread, which means no stuffing. But they may have stuffed the wild fowl with chestnuts.

Forks: In 1621, English folks opted for spoons, knives, and fingers.