What’s Smarter: Your Dinner or Your Baby?

The surprising intelligence of the animals we eat 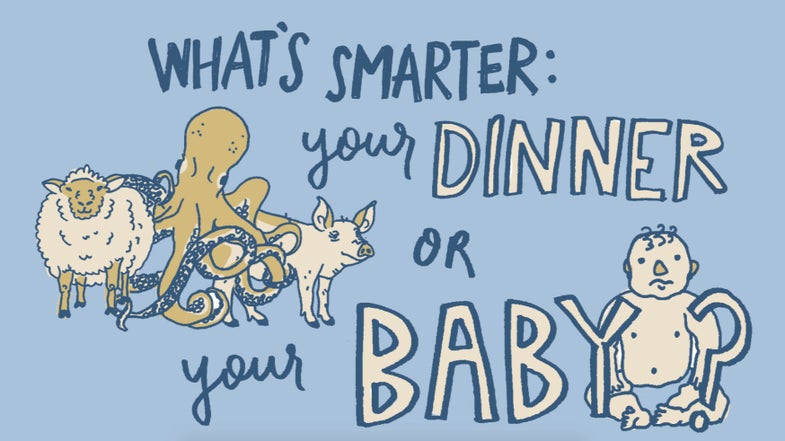 No, we’re not saying babies are stupid. Certainly not your baby. But your dinner may be more clever than you think.

Time after time, the intelligence of certain animals surprises scientists. Chimpanzees have even shown some basic cooking skills. Which all leads to some ethical questions on the plate: how smart is too smart before it’s not okay to eat an animal? If we don’t feel comfortable eating dogs, how do we feel about eating pigs, which are demonstrably more intelligent? And octopuses, which are smarter still?

There are many ways to measure intelligence, none of which are conclusive on their own, but we used a few to investigate how some of the animals we eat would fare compared to one we definitely wouldn’t eat: a human baby. In more than a couple tests, dinner comes out on top.

Child-proof caps are great to protect your baby, but they won’t fool octopuses. And even sheep have a greater capacity for emotion than you may realize; they’re social creatures that make friends, can remember the faces of more than 50 other sheep, and recognize a familiar human face. And if you make one mad, he will remember it for far longer than your baby probably will.

We’re not saying you should stop eating these animals, or meat altogether. But it’s certainly food for thought.