A new ceramic exhibition proves it's about much more than takeout on Christmas. 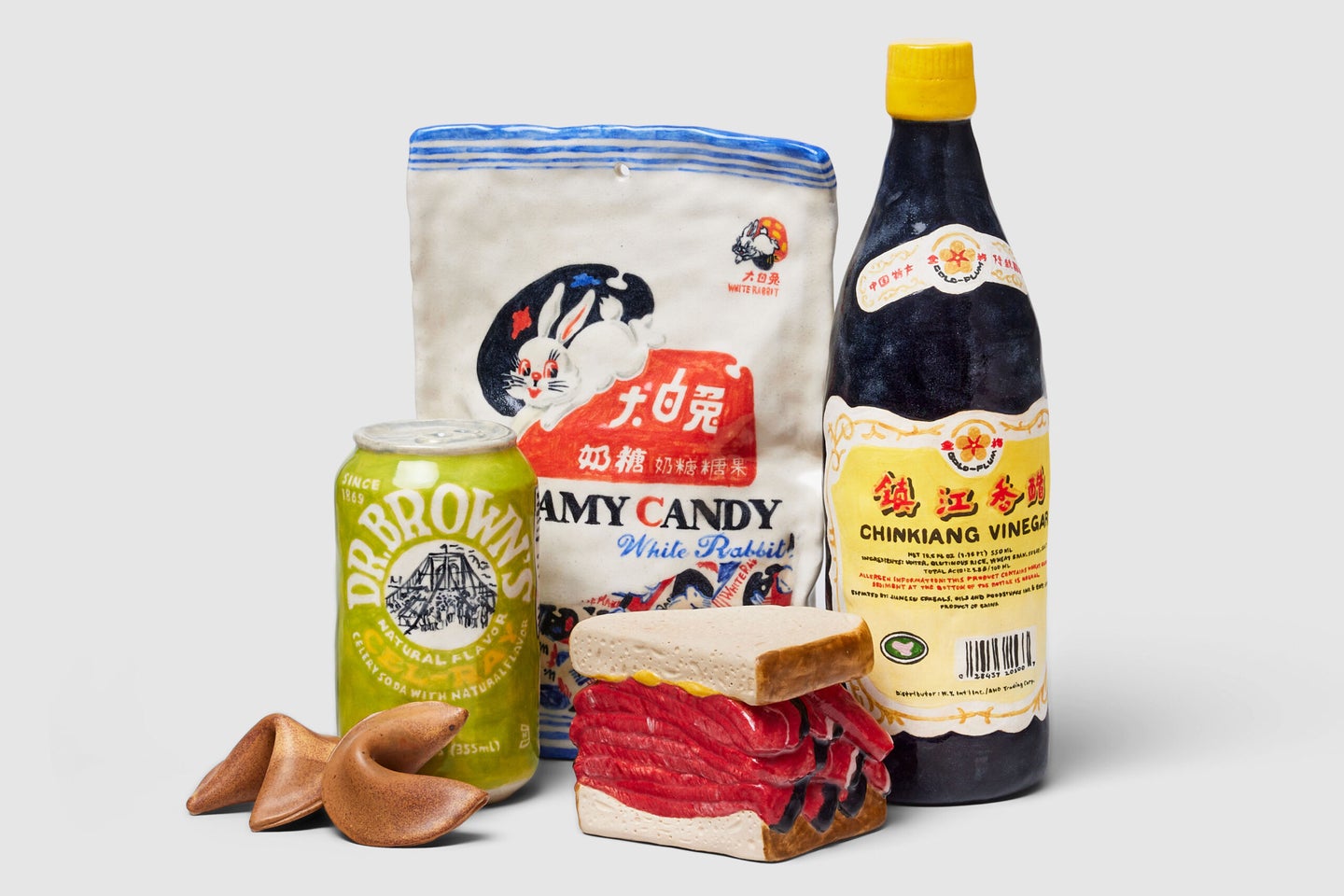 In 1957, a new kind of restaurant opened at 135 Essex Street in Manhattan, more or less equidistant from the borough’s Chinatown and the tenements that had served as the epicenter for Jewish immigrants since the turn of the 19th century.

It wasn’t the cuisine that was new. Americanized takes on Chinese food, like moo goo gai pan in a velvety slick of soy sauce and broth thickened with corn starch, had become ubiquitous in New York City since the collapse of the Gold Rush fueled discrimination and violence that forced Chinese immigrants living on the West Coast to move east.

But Bernstein-on-Essex, as the restaurant was called, was the first in the city to offer up these dishes in strict compliance with kosher standards. The egg foo yung, for $2.50, came with chicken livers instead of pork. Shellfish was nowhere to be found. And the restaurant’s sign featured a man in a yarmulke, next to text that declared the eatery “the tastiest delicatessen in the world.”

In her new exhibition Open Sundays, now on display at the Harkawik gallery on the Lower East Side, Stephanie H. Shih displays a stunningly rendered version of this sign in her signature painted ceramic. It is one of 30 sculptures she has created to explore the overlap of Chinese and Jewish communities in the neighborhood for the roughly hundred-year period beginning in the late 1800s.

A few yards from where the Bernstein-on-Essex sign hangs is a long table that displays Shih’s sculpted takes on other iconic food and drink, like a bilingual bottle of Soy Vay Veri Veri Teriyaki, roast pork on garlic bread, Golden Plum Chinkiang Vinegar, and a can of Dr. Brown’s Cel-Ray Soda.

“A lot of my solo shows are about this idea of authenticity,” says Shih, who has been working in ceramic full-time since 2015. “There are no cultures that are untouched by other cultures. These are two communities that grew up alongside each other. It was not always friendly, but simply from proximity and the fact that they were the two largest non-Christian immigrant groups, they had commonalities.” For example, she says, the tradition of Jews eating Chinese food on Christmas began right near Harkawik, on the Lower East Side.

Shih’s “RPG” sculpture, featuring 10 glossy slices of roast pork arranged appealingly across a slab of garlic bread, depicts another classic crossover: a sandwich stuffed with Cantonese-style char siu and duck sauce, popular in the Borscht Belt in the 1950s. (Just a few neighborhoods northwest, the Manhattan outpost of Court Street Grocers still peddles an RPG under the moniker “Catskill Roast Pork” for $15.)

Shih says she almost named her show “safe treyf,” after the colloquial way Jewish immigrants referred to Chinese food in New York City. (It was characterized as such because of the lack of milk mixed with meat—a kosher no-no—and because, as some historians posit, discrimination against both immigrant groups in New York City made for a sort of culinary safe haven.) “Chinese food started to get this pass, when people might have kept kosher otherwise in the home,” Shih says.

Instead, she called the exhibition Open Sundays, to capture yet another commonality: while most businesses closed in observance of the holy day, the doors to both Jewish and Chinese businesses remained unlocked, ready to tout frozen dumplings, warm loaves of challah, and heaping plates of lo mein that were, in some cases, completely kosher.