The Art of Yusho 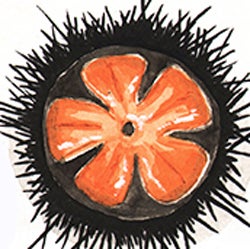 My boyfriend Niles and I love exploring new restaurants, and we’re both fans of Japanese food in particular, so we were thrilled about the addition to the neighborhood when chef Matthias Merges opened Yusho right around the corner from us in Chicago’s Logan Square/Avondale neighborhood in late 2011. I draw a regular webcomic about food called “I Think You’re Sauceome,” and I often include meals Niles and I have eaten when we try new restaurants. Over the course of the few months after Yusho’s opening, I had drawn three different comics about eating there—the restaurant was a natural inspiration for my comics, because the food was not only amazingly tasty, but also gorgeously presented, and that makes it so much fun to draw.

The very first of the comics I did got picked up by a few Chicago food blogs, and I ended up making a print of it for the restaurant (I’m told it’s still hanging in the kitchen). By the time I published the third one, Patric King of House of Pretty, who handles all of Yusho’s print and web design, approached me to ask if I’d be interested in working with them on a long-term project of making comics for their email newsletter. I decided to do the pieces in watercolor, because I wanted them to have a distinct look (I generally draw with pen and ink, and use digital color), and I wanted to echo the warm and colorful feel of Yusho’s interior. You can sign up for Yusho’s e-mail newsletter, Yusho Arts, at yusho-chicago.com —Sarah Becan 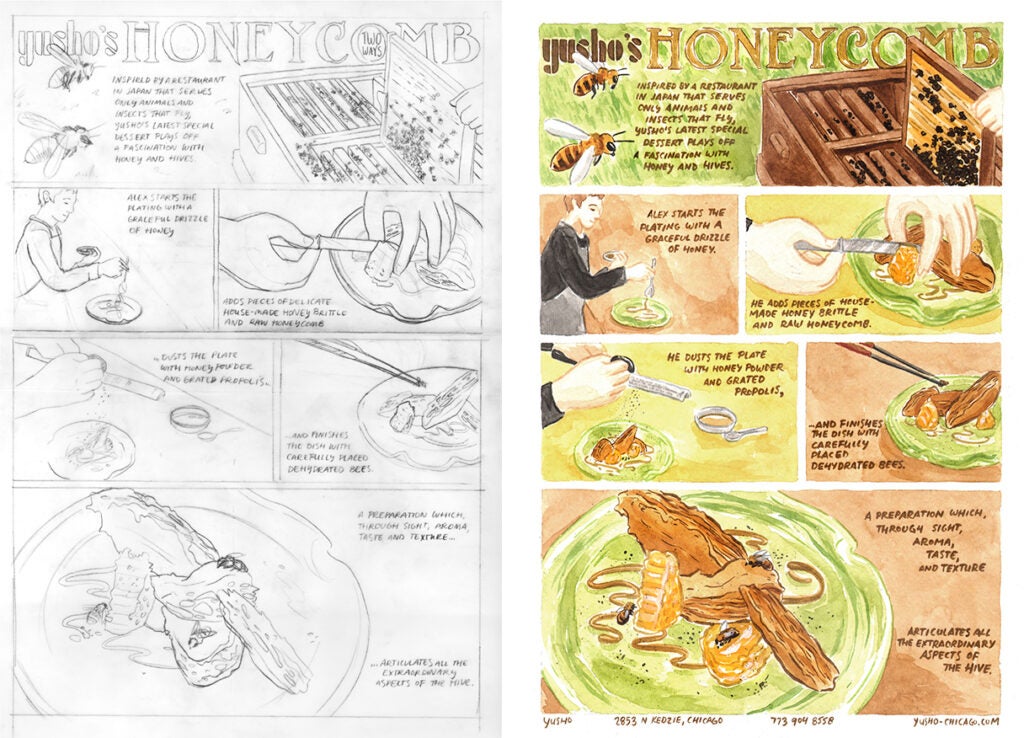 January 11, 2013
Matthias was one of the chefs invited to participate in the Restaurant at Meadowood‘s 12 Days of Christmas last year, in which a selection of guest chefs cooked at the Napa Valley restaurant, and for the meal he put together an amazing list of courses, one of which was an exploration of honey, bees and hives that included dehydrated bees. (Yes, actual bees.) He brought the dish back to Yusho, and I was so excited to try it: We’re not used to eating insects in this country, but they’re a responsible and easily renewable source of protein. Eating a bee wasn’t as strange as I thought it would be–against the strong flavors of honeycomb and honey brittle, the little guys themselves provided texture, more pleasantly crunchy more than anything else. Sarah Becan is an illustrator, designer and comics artist living in Chicago. She is the creative director at Fathead Design. She draws a lot of food on her webcomic I Think You’re Sauceome; see more of her work at SarahBecan.com. 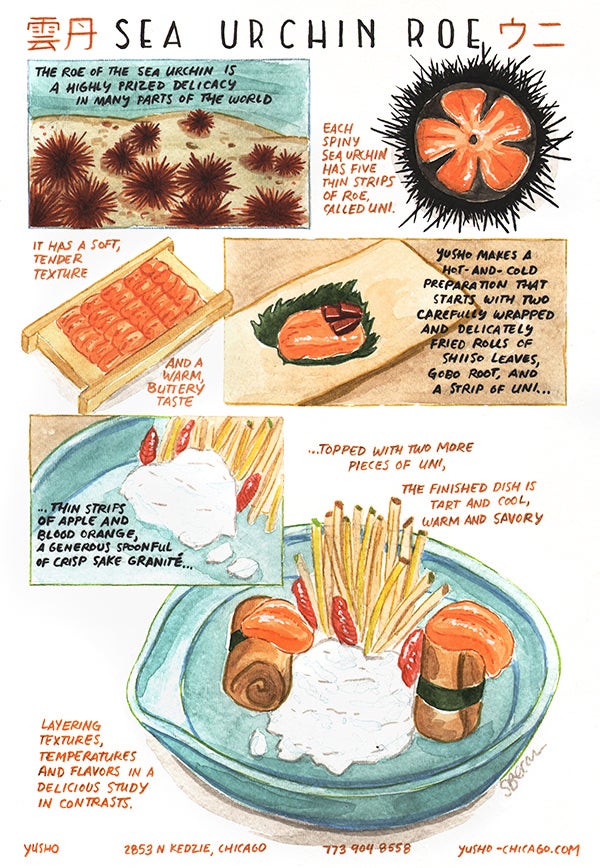 February 8, 2013
I’ve fallen into a pleasant rhythm of walking down to the restaurant for “research” on a Sunday afternoon, when it’s quiet and laid-back and my endless questions won’t be too intrusive. I squeeze back into the kitchen, and sous chefs Anndria Jones and Alex O’Connel put the dish together for me, let me take a bunch of photos, and patiently talk me through each ingredient and the preparation–and then I got to sit down and enjoy it! It’s one thing to be told that it’s a “hot-and-cold” preparation, but another thing entirely to taste the buttery uni roe right next to the crisp tartness of apple slices and sake granit¿; it makes the experience so much more real, and then it’s easier to convey to the reader. Sarah Becan is an illustrator, designer and comics artist living in Chicago. She is the creative director at Fathead Design. She draws a lot of food on her webcomic I Think You’re Sauceome; see more of her work at SarahBecan.com. 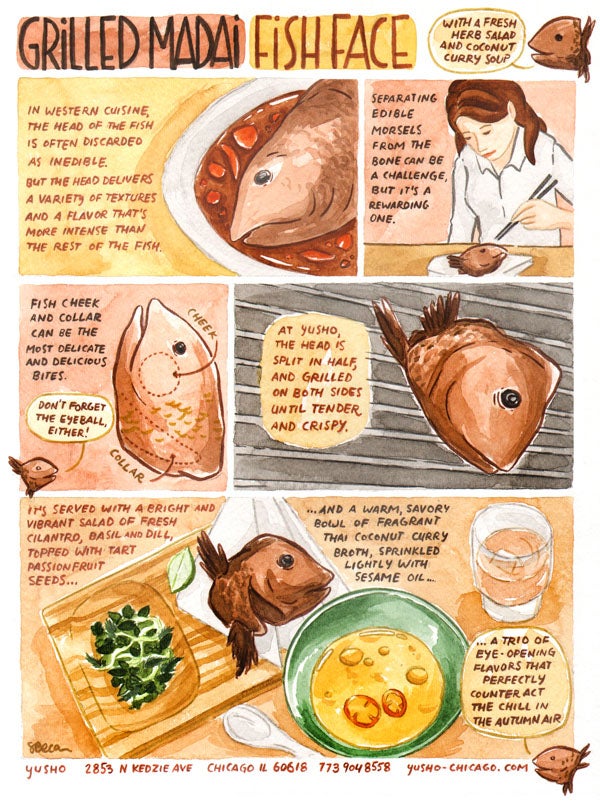 October 12, 2012
The grilled Madai fish face was a lot of fun to draw. I was a little worried that having the little fish head as the narrator of the piece would be too silly, but Matthias was game, and it ended up working out well. Sometimes the goal of the comic is to demystify a dish that might seem a little unusual to people, and the playful tone of this went a long way towards that–I’m not used to eating fish heads myself, so it was educational for me, too. When I was at Yusho for my research meal, Matthias checked in on me to make sure I had eaten the eyeball. I knew I wouldn’t be able to chicken out on his watch, and I’m glad for it: it was delicious! Sarah Becan is an illustrator, designer and comics artist living in Chicago. She is the creative director at Fathead Design. She draws a lot of food on her webcomic I Think You’re Sauceome; see more of her work at SarahBecan.com. 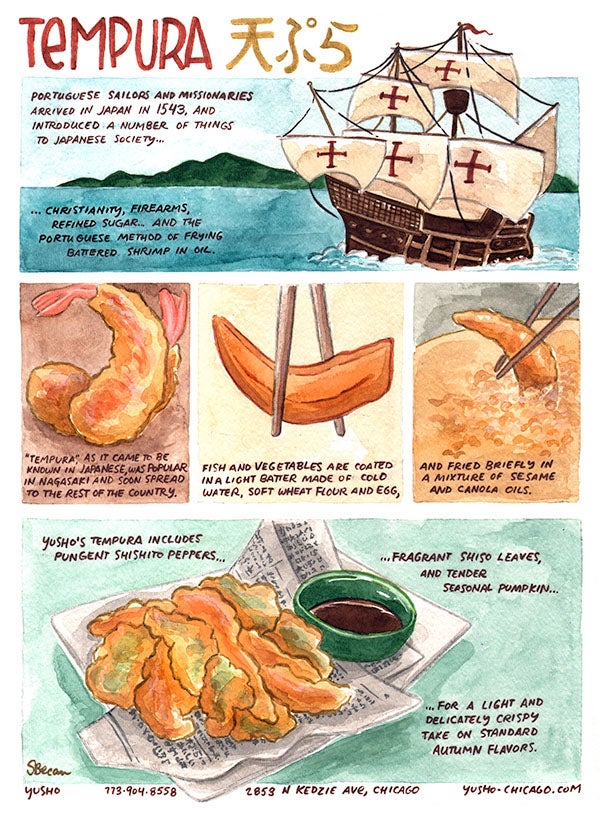 November 9, 2012
I love that sometimes I get to completely nerd out on these paintings. Tempura is an iconic Japanese dish, but it was actually brought to Japan by Portuguese explorers, and that sort of culinary history is really interesting to me. For this comic, I ended up doing all sorts of visual research on 16th century Portuguese carracks to make sure the ship looked right. And of course, the tempura itself was delicious–the pumpkin was melt-in-your-mouth soft, and the shiso leaves were delicate and crispy. Sarah Becan is an illustrator, designer and comics artist living in Chicago. She is the creative director at Fathead Design. She draws a lot of food on her webcomic I Think You’re Sauceome; see more of her work at SarahBecan.com. 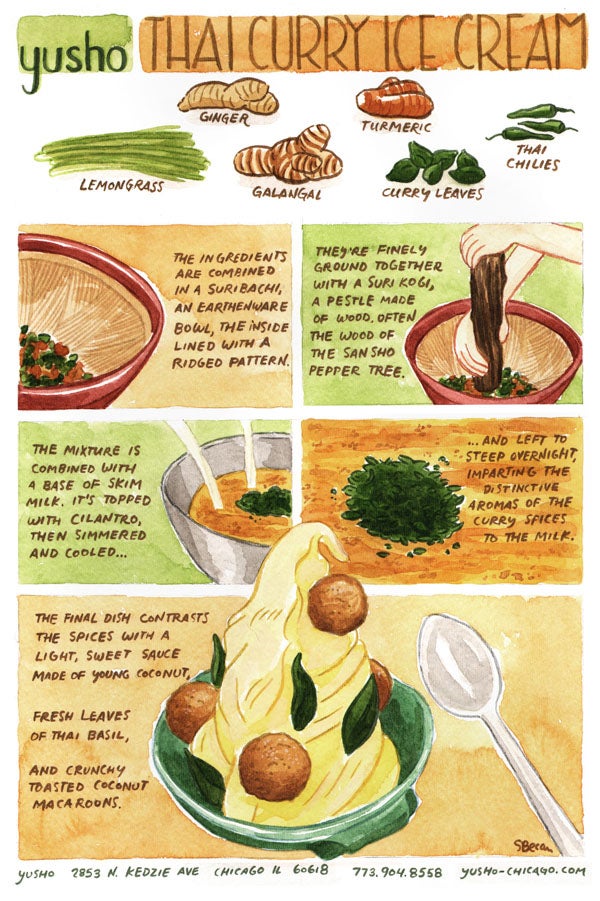 September 28, 2012
The ice creams at Yusho are some of the best I have ever eaten. Matthias and his team come up with some of the most unexpected flavor combinations, like cardamom with rhubarb and toffee, or eggnog with a Fernet caramel topping. This Thai curry ice cream was deliciously complex: sweet and spicy, and made with fresh ingredients ground together in a beautiful suribachi bowl that Alex was proud to show off to me. When the cooks are this passionate and excited about their process and equipment, these comics almost write themselves. Sarah Becan is an illustrator, designer and comics artist living in Chicago. She is the creative director at Fathead Design. She draws a lot of food on her webcomic I Think You’re Sauceome; see more of her work at SarahBecan.com.