Why Are Germans So Crazy for White Asparagus? 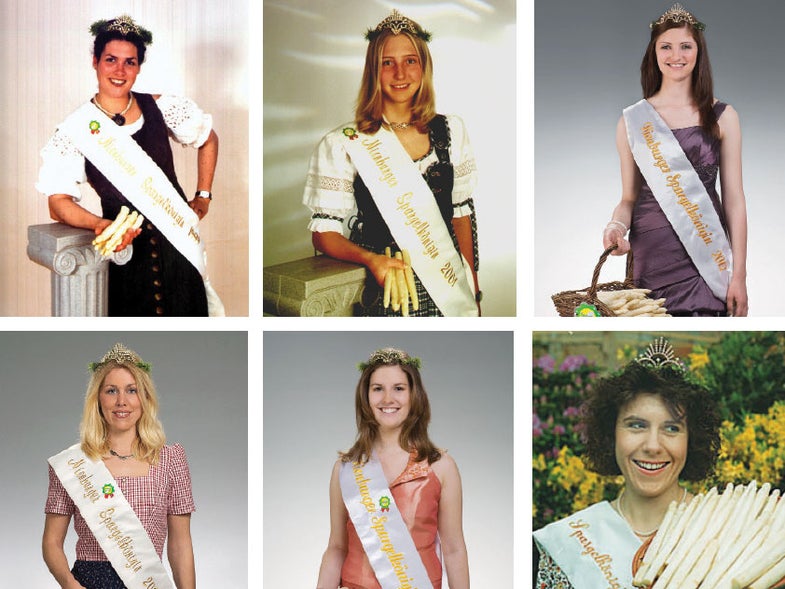 In late May, the medieval German town of Nienburg crowned a new asparagus princess in the garden of the Lower Saxony Asparagus Museum. It was the day after the annual asparagus run, and the winners of other local pageants put on party dresses and sashes to welcome the Spargel Prinzessin to their royal court. There was an herb princess in a green skirt, a harvest princess in a floral headdress, and two rhododendron princesses in red gowns. “I can get used to being around so many beautiful women,” the potato prince, who wore a brown suit and was the only male pageant winner, told the emcee.

The asparagus princess, a shy teenager named Nicole Cybin, had an exalted place among her peers: In Germany, Spargel, or white asparagus, reigns supreme among vegetables. Every year the German people eat 140,000 tons of asparagus, nearly all of it the white variety. German farmers devote more land to Spargel than they do to cabbage for sauerkraut. From April until June, you find white asparagus on the menu of nearly every restaurant, prepared almost always the same way: boiled and topped with hollandaise or brown butter, served with a side of boiled peeled potatoes and a plate of sliced ham, smoked salmon, or schnitzel. What is it about this colorless vegetable that drives Germans crazy?

Nienburg is a good place to find out. The town is along the Spargelstrasse, or Asparagus Road, in Lower Saxony, a 460-mile path that grows more asparagus than any other part of Germany and attracts thousands of pilgrims every spring. Nienburg’s attractions include not only the Spargel museum but also a Spargel fountain in the center of town. This year’s Nienburger Spargelfest fell on one of the first warm days of an overdue spring, and sunshine soaked the museum garden so intensely that the shrubs and flowers seemed to bleed around the edges. Attendees sat at picnic tables among old statuary from the House of Hanover. They proclaimed Nienburg Spargel to be the best in Germany and attributed white aspara­gus’ popularity to its nutrient content, its local cultivation, and the arrival of the harvest with warm weather every spring. Some lauded the beauty of the white stalks, while a German friend noted their undeniable resemblance to a phallus. “That’s why Germans love it so much,” she said. Many people emphasized the vegetable’s delicate and nutty flavor.

And what did the new princess have to say about the national obsession? Cybin wore a pink dress and carried a basket of asparagus, each stalk pale and slender like a bone. She was easy to pick out in her tiara among all the heads of gray hair. I asked her why Germans love white asparagus, but before she could answer my question, a large man from the Consortium of Nienburg Spargel interrupted with a loud and long-winded explanation in German. Cybin translated his monologue into a few tentative words of English: “Asparagus cleans the body and allows the sun to come in.”

Everyone emphasized the healthfulness of Spargel as they mopped butter and hollandaise off their plates. And they praised the simplicity of a vegetable whose cultivation is actually painstaking. Before the party, a farmer named Ernst August Theisinger took me into an asparagus field. He had buried the asparagus plants in mounds of soil, in order to block out the sunlight that would produce chlorophyll and turn them green. He waited two or three years for each asparagus stalk to mature, at which point he and his workers harvested them individually by hand.

His demonstration reminded me that the popular stereotype of German efficiency is not really accurate. What Germans love even more than efficiency is procedure. White aspara­gus embodies this trait at every step from farm to table. Markets sort white asparagus into different “choices,” like cuts of meat, with the thickest stalks commanding the highest price. And the straightforward boiled preparation of Spargel belies the fact that every stalk of white asparagus must be peeled. The difficulty of this task has allowed Germans to scratch another national itch: the construction of extremely specialized machinery. The German company Hepro manufactures nine different models of asparagus-peeling machines.

It is hard to imagine such a labor-intensive food really catching on in a country as convenience-obsessed as America, where most people would probably rather stick to frankfurters. The thing about Spargel, though, is that it is worth the effort. It tastes like an asparagus grown on a cloud rather than in the soil. It’s less like eating green asparagus and more like fresh lobster: The flesh is wan and tender, the flavor is sweet and subtle, and everything swims in butter. It is a shame white asparagus is not as iconic as other German foods, like wurst and beer. In a better world, the Nienburger Spargel Princess would be as famous as the St. Pauli Girl.