How a Greek Refugee Camp Served a Taste of Home

On the island of Lesbos in Greece, refugees have been pouring in from across the Middle East and Africa, and they've been seeking comfort in a simple cup of tea 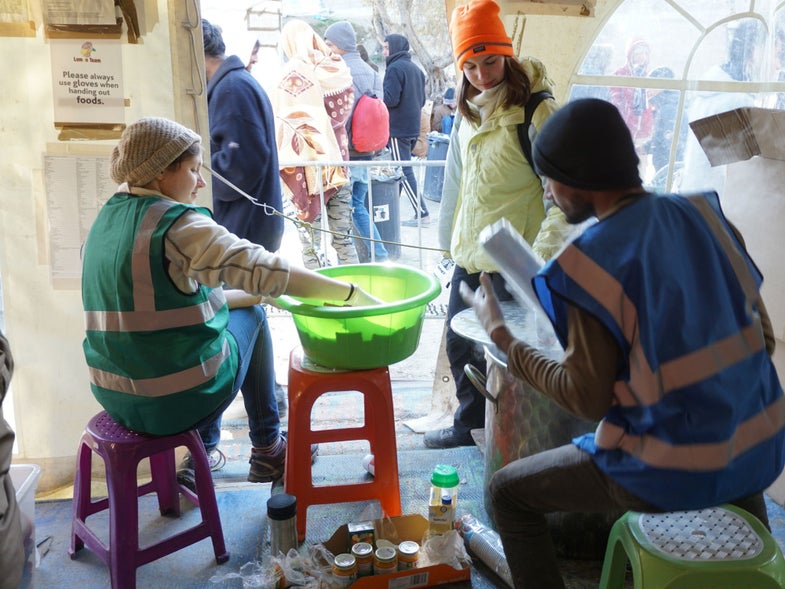 Lesbos has all the characteristics of a typical touristy Greek island. The beaches are beautiful, the water is a vivid blue, and its port towns are picturesque. But for the past nine months, the island’s proximity to Turkey has made it a point of entry not just for travelers, but also an enormous number of refugees fleeing Syria, Afghanistan, Iraq, and Pakistan, as well as countries in Africa.

To accommodate these people, Greece converted a military base in the middle of the island to a formal registration camp called Moria, a place where all incoming refugees needed to stop before continuing their journey across Europe. The camp, lined with barbed wire and kept under guard by police, didn’t encourage much comfort or a sense of unity. That is, until you worked past the clothing distribution and information desks (with pamphlets printed in Arabic, Urdu, and English) and made your way to the tea tent.

On cold snowy days, the tent’s warm tea and snacks offered a place of refuge. Food and water were available elsewhere, too, but the tea tent fulfilled another purpose. Once they registered, the refugees were separated by nationality; the tea tent was where they came together and had a chance to get to interact. Not only with each other, but also with volunteers.

Across cultures, tea brings people together and conjures images of home, be it Lesbos, Syria, or anywhere else the refugees are leaving. The flavors vary from country to country but the role is the same: to share news and catch up. There was always a line for tea, even if it was only a few people long, and in it people spoke a mix of Farsi, Urdu, Arabic, and English. When language barriers were insurmountable, gestures sufficed.

Imogen Moijie, the food coordinator for the camp’s NGO Better Days for Moria, noticed cultural preferences when it came to the drinks. “[We] have noticed that some cultures seem to have a tendency for one type of tea over another. For example, Pakistanis tend to prefer tea with milk, whereas Syrians have quite often requested black tea with just sugar.”

David Griffin worked in the tent in January, and he remembers it as a place for kids who had to entertain themselves. “The children—some of them more than others—seemed to regard the tea tent almost like it was a way of passing time,” he said. “They walk by the opening and they could get something whenever they wanted, then they begin to come by three times in 15 minutes.”

A Moroccan refugee stuck in Greece also volunteered; as an economic refugee, he wasn’t allowed to cross the Greek border. He made the tea with lots of spices, but never milk, while he listened to songs in German on his phone. Even after three months in the camp, he was confident that he would eventually leave, and he used the tea tent as a way to meet volunteers and learn more about what the rest of his trip might involve.

In March, a deal between the European Union and Turkey caused Moria to close. Instead of an open center, it became a holding cell for migrants who would ultimately be shipped back to Turkey (although as of today, those migrants are still in a holding pattern). All of the services once provided in that camp were removed, including the tea tent. Now that this is gone, Europe is missing a way to connect with these people and provide them a basic comfort as they wait for what comes next.