At Home With Galen Zamarra

A peek inside the chef's bright New Jersey kitchen 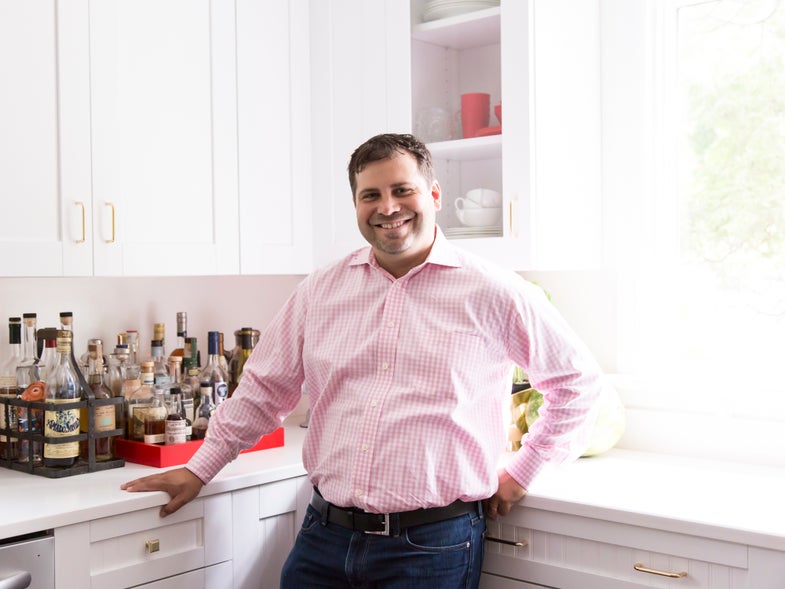 He may live in New Jersey, but to hear chef Galen Zamarra talk about it, you’d think he was living in the wild. The chef and owner of Manhattan’s Mas (farmhouse) and Almanac lives in a charming four-bedroom Colonial in South Orange, right on the South Mountain reservation—a lush landscape of trails, lakes, and forests. “We walk out the door and go hiking, fishing, and foraging. It’s like a big wilderness right outside our door,” said Galen, who moved here with his wife Katie and their two kids (Edward is 6, Ellie is 8) six years ago. Together, they hit the trails, hunting and gathering ramps, greens, mushrooms and more, and then haul it down the mountain to the heart of their home: the kitchen.

Galen and Katie bought the 1930s home from its original owners, and knew that they would need to put a lot of love into the kitchen. “The original kitchen was very outdated, the floors were old, the walls poorly insulated,” said Galen. “There was an ironing board that came out of the wall. We set stools at it and used it as the kids’ table.”

The kids don’t eat at the ironing board anymore. In 2014, the Zamarras gutted the kitchen, redid the floors, put in big windows, and broke down the walls to a separate breakfast nook to make it one big room. They installed all quartz countertops, new cabinets, and built a wide peninsula to eat at instead of an ironing board. “The kids got upgraded,” Galen said.

He and Katie have filled the kitchen with antiques and treasures from their travels in Europe and New Orleans (where Katie is from and where they got married), and have it set up to fuel their mornings (with a pour-over coffee station), feed their kids breakfast (at the peninsula), and fire up their dinners (thanks to a DeLonghi stove). Have a look inside.

Andrea Strong’s writing chronicles the world of food—from farm to fork, and all the stops along the way. Her work has appeared in The New York Times, New York Magazine, and a host of other publications, including The Strong Buzz, her blog devoted to New York City’s food scene. She lives in Queens with her husband, her two kids, and her big appetite. 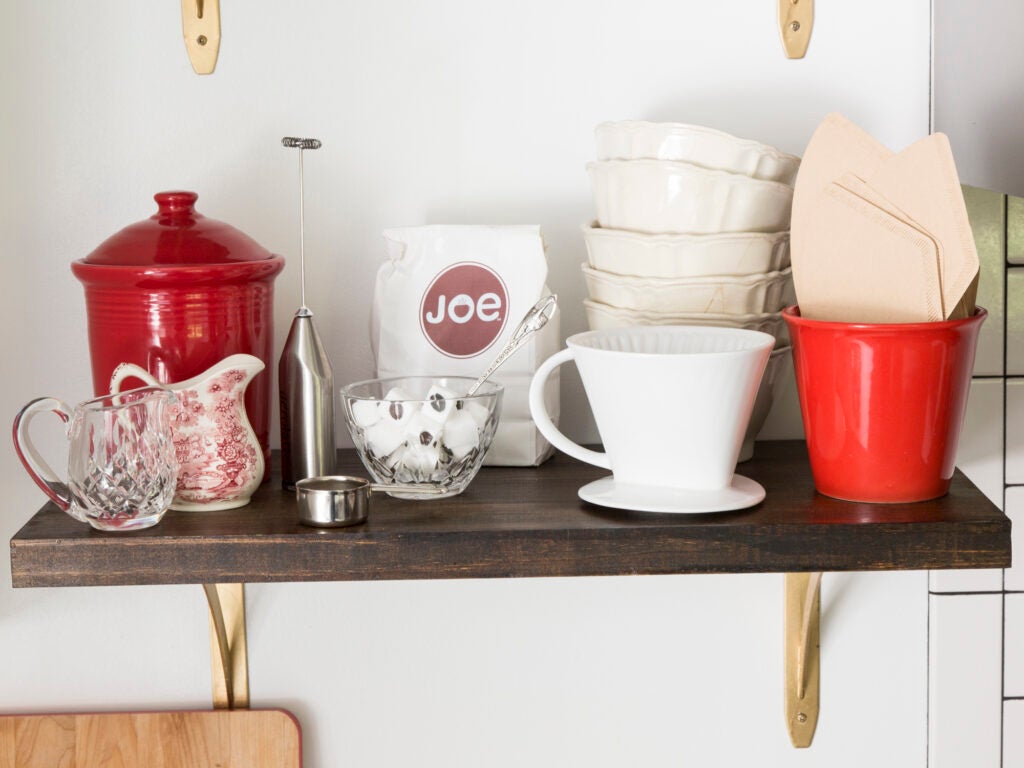 “We used to have a coffee machine, but when I was growing up in California, we used the pour-over method. My wife, Katie, was skeptical at first, but now she loves it. We have this little station with all our mugs, coffee from Joe, and sugar. When Hurricane Sandy hit, we were out of power, but we could still make coffee.” 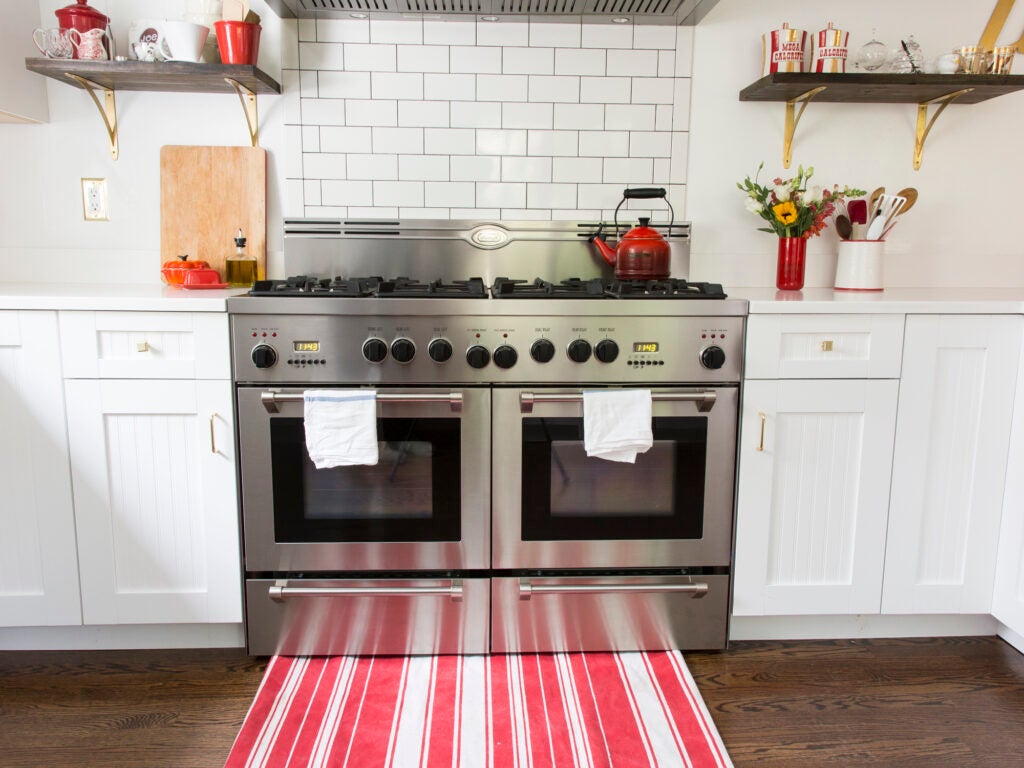 “DeLonghi is really well known for their coffee machines, but I love their stove, though I don’t know that they make them anymore. It’s got six burners, and it’s very functional because some are huge and can be scaled down. It has two separate ovens that can be convection or non-convection, and plate warmers. It’s nice looking, in stainless. I love it.” 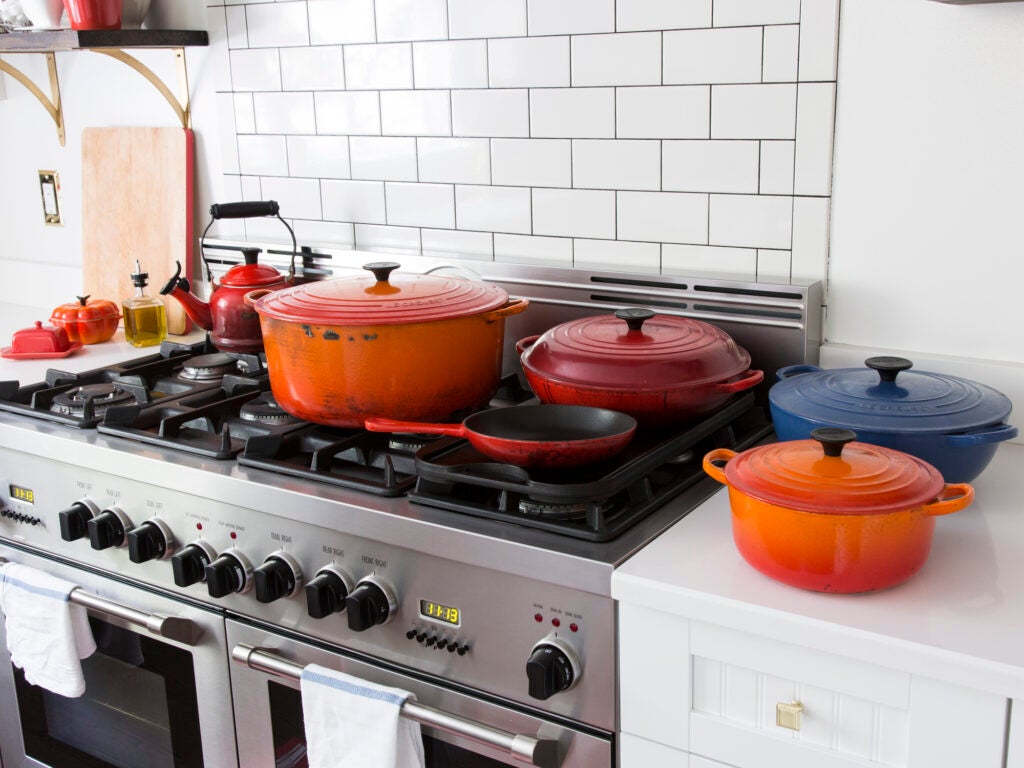 “Le Creuset are some of my favorite pots to cook in. I use the biggest one for shrimp or crawfish boils. I mean, it’s so big we could bathe our kids in it. But we don’t! We have Le Creuset in all sizes, right on down to the tea pot. They go on the stovetop or in the oven. They’re in these great colors and they’re as good as non-stick. They are perfect pots.” 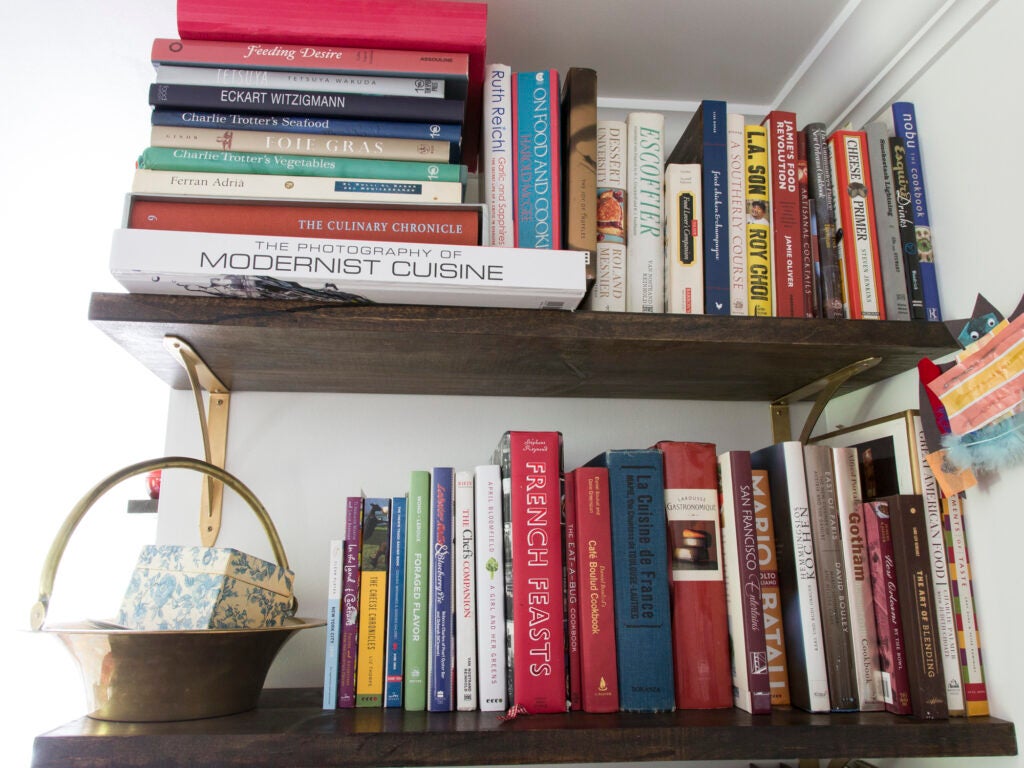 “We knew we wanted open shelving, and we had some beautiful pieces of oak from Mas (La Grillade), which was renovated to become Almanac. We used that wood for our kitchen shelves where we keep about 30-40 cookbooks. It’s a mix between the ones my wife uses, like Southern Living, Julia Child, and Balthazar, and my cooking school books.” 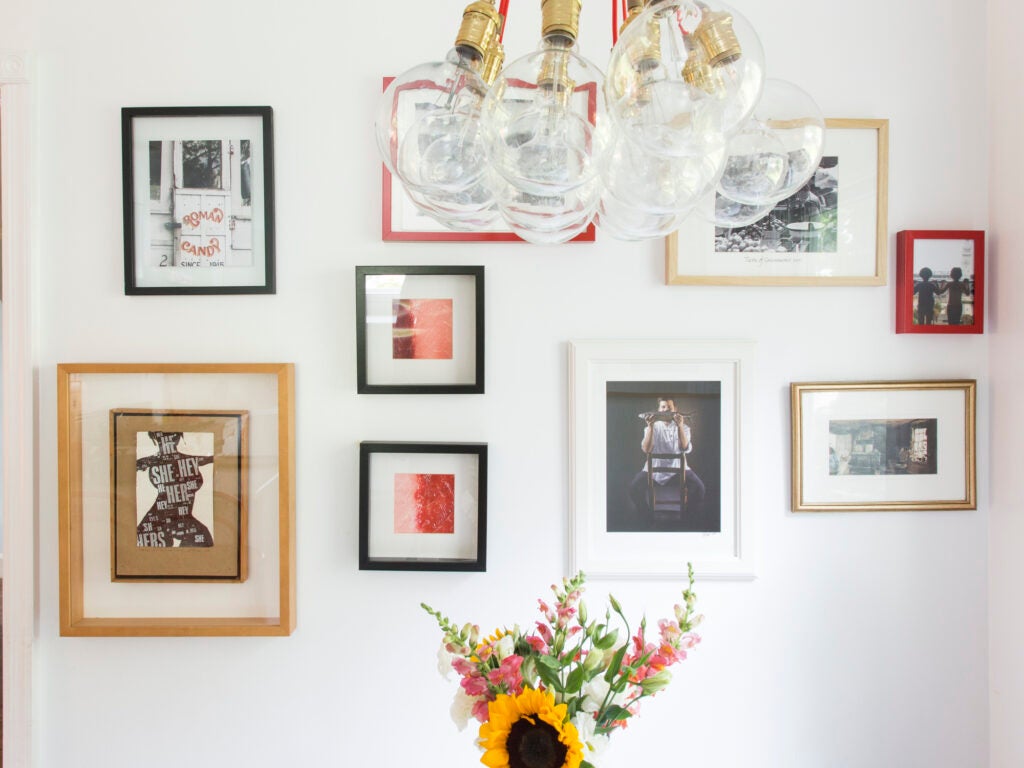 “We have a little gallery of food photos—some that I took, like the one of a tuna from a trip to Japan, some are drawings, some are of my kids, some are professional photos of the Greenmarket. It’s a mix of fun things.” 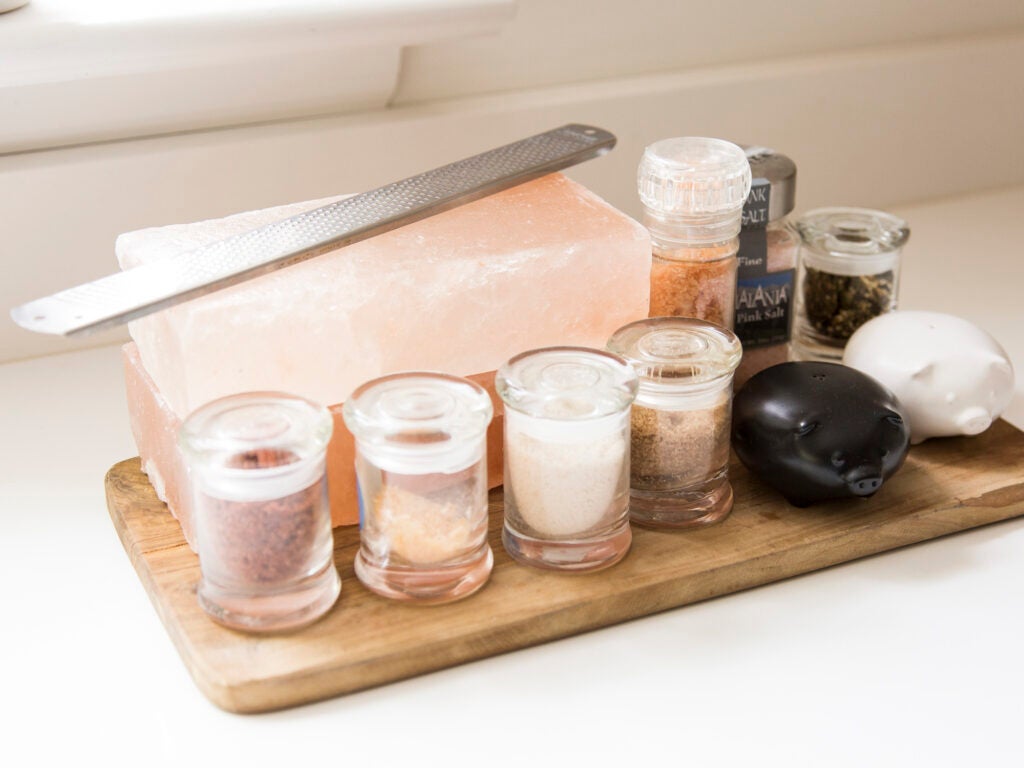 “We love salt and we have a collection of all different kinds—pink Himalayan, fleur de sel, Maldon, smoked. We keep them in these little dishes and antique jars with tiny little spoons that we have collected over the years. We have some salt bricks, too.” 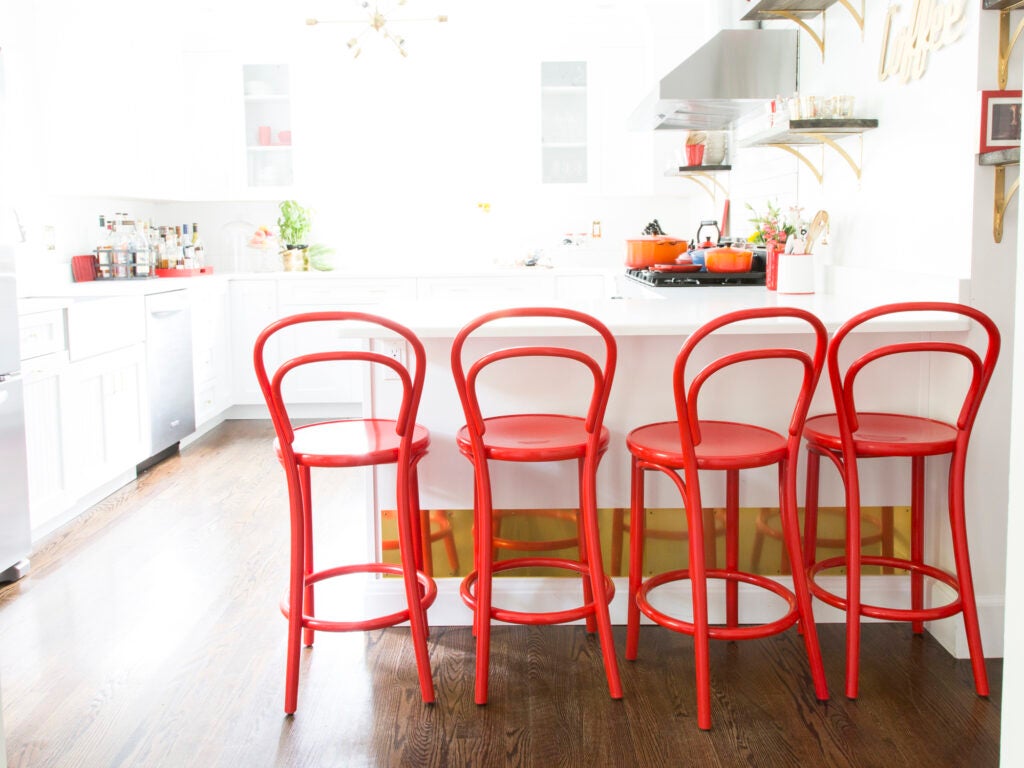 “We have these cherry red Thonet stools at the peninsula. They give the room this great shock of color. I love the peninsula. When you’re cooking, it’s a place where you can chat while you cook. It’s an area where kids can do homework, and where we have breakfast. Morning is my quality time with the kids, so they are not getting cereal and milk. Even on school days, Katie makes biscuits, or scones; I make pancakes, or French toast, and eggs.” 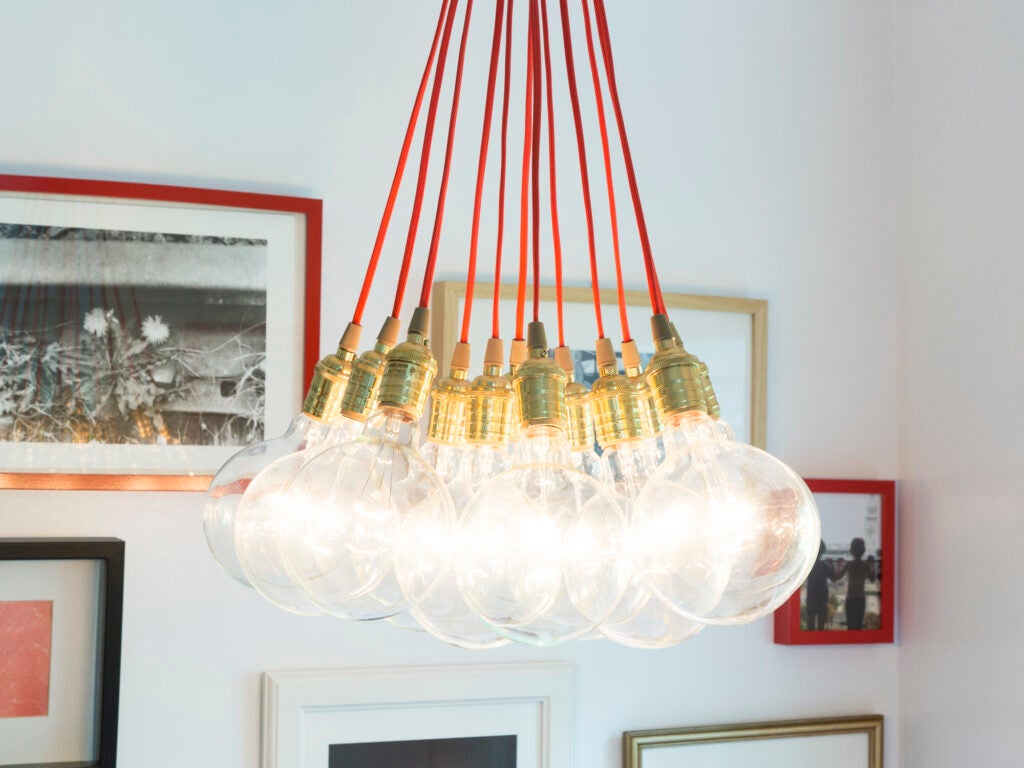 “The lighting project was fun because we went to Grand Lighting on Bowery and they custom-built these two chandeliers for us, which is much more affordable the comparable designer options. One is a Sputnik style, which was inspired by a Kelly Wearstler design, and the other has these very bright red electrical cords with like 20 big bubbly bulbs on it, inspired by a Jonathan Adler fixture.” 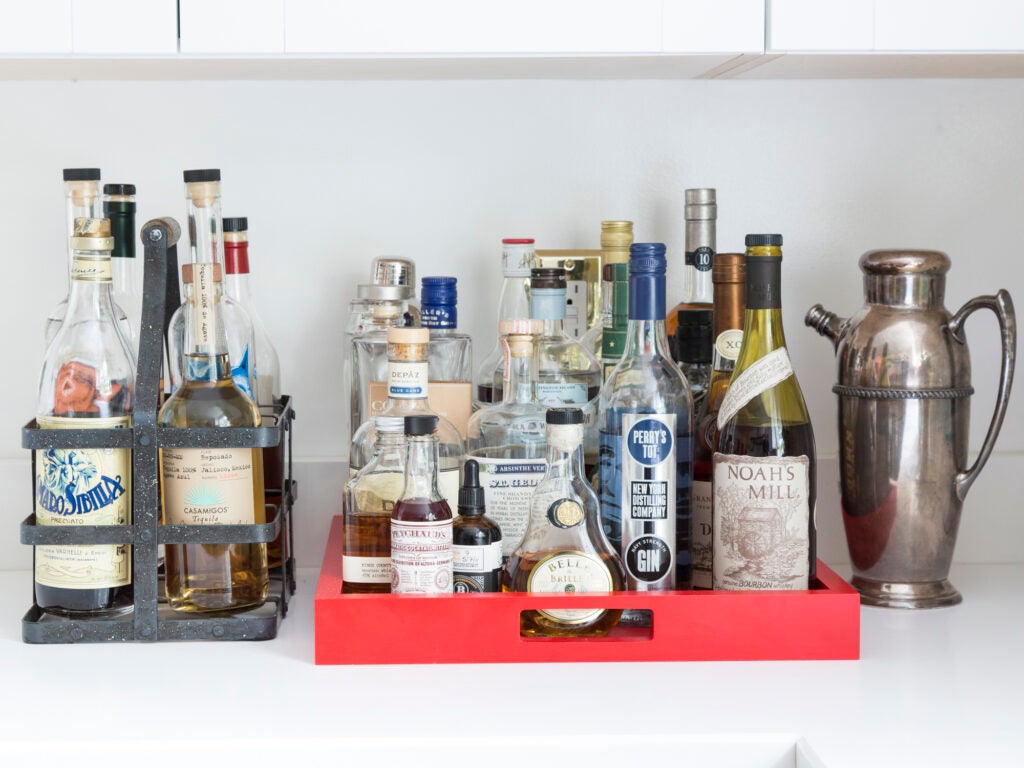 “We have a well-stocked bar with lots of good tequilas like Casamigos & Corzo, and a big collection of Whiskey and Bourbon including Pappy Van Winkle. There are some nice bitters, too. I am not a huge cocktail person; I tend to drink stuff straight. But Katie likes a Pimm’s Cup.” 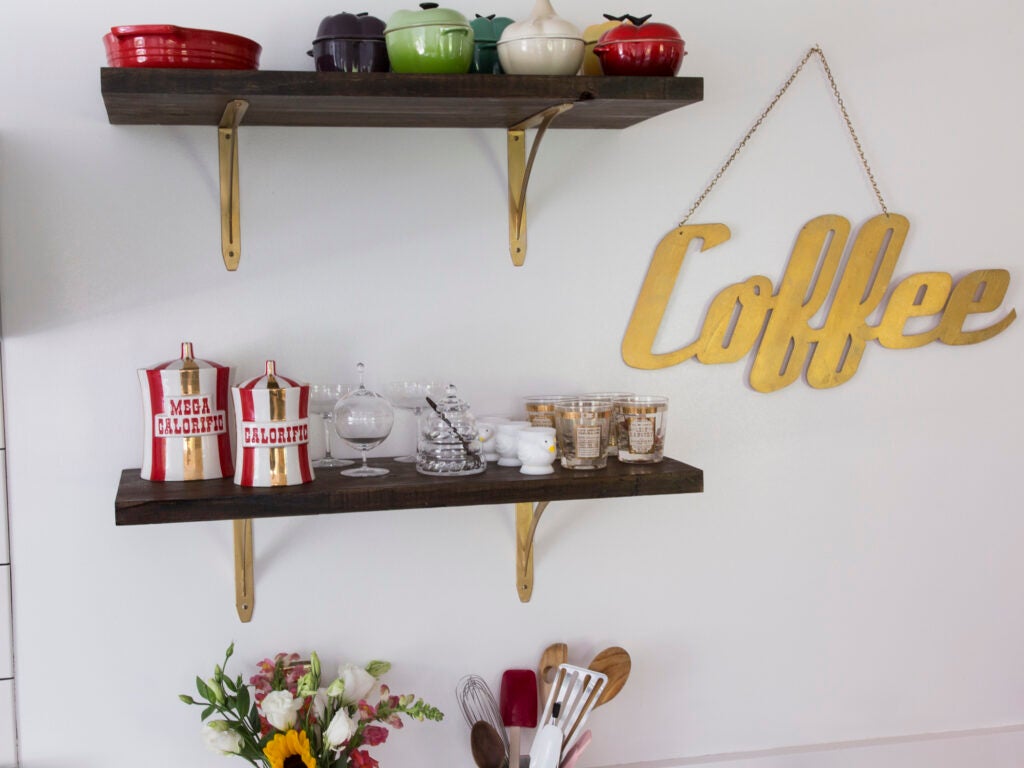 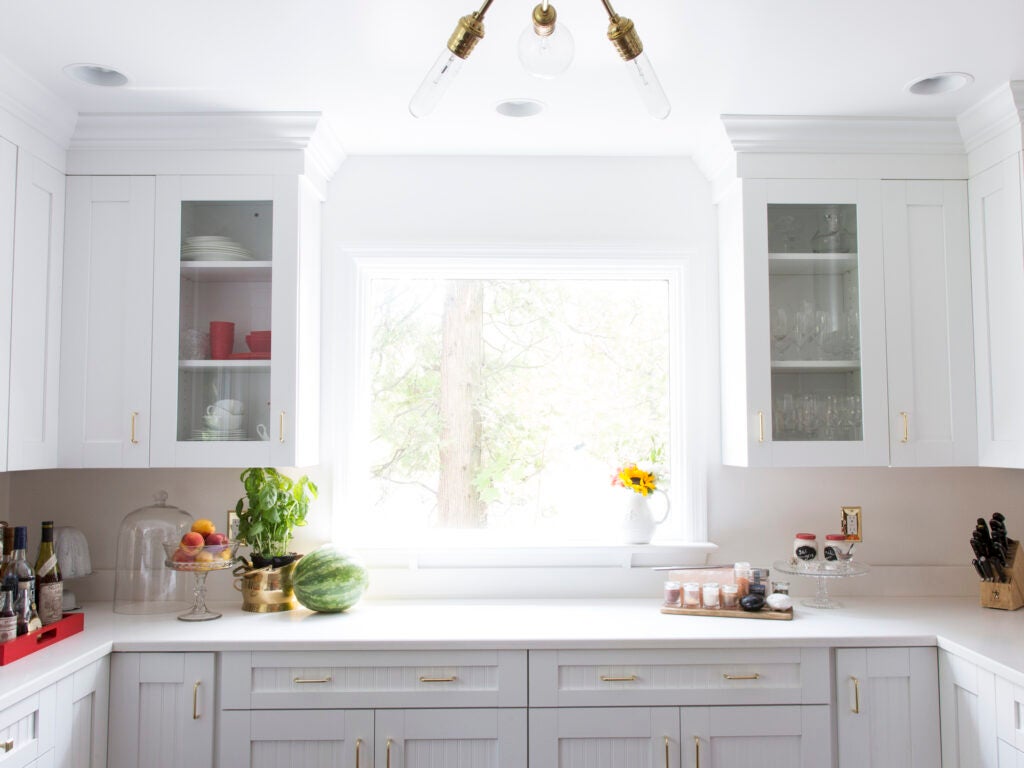 “The picture window used to be the side door to the house, but we took it out and made it into this big open space that really lets in a lot of light. We are up on a hill, and the window looks right out at New York City. In winter, when the trees don’t have leaves, you can see the skyline.”
Features
Profiles
At Home With
Chefs
housewares
Lifestyle