Taffy Brodesser-Akner travels to Israel to reexamine the soup of her youth and the gap between memory, desire, and (ugh) reality 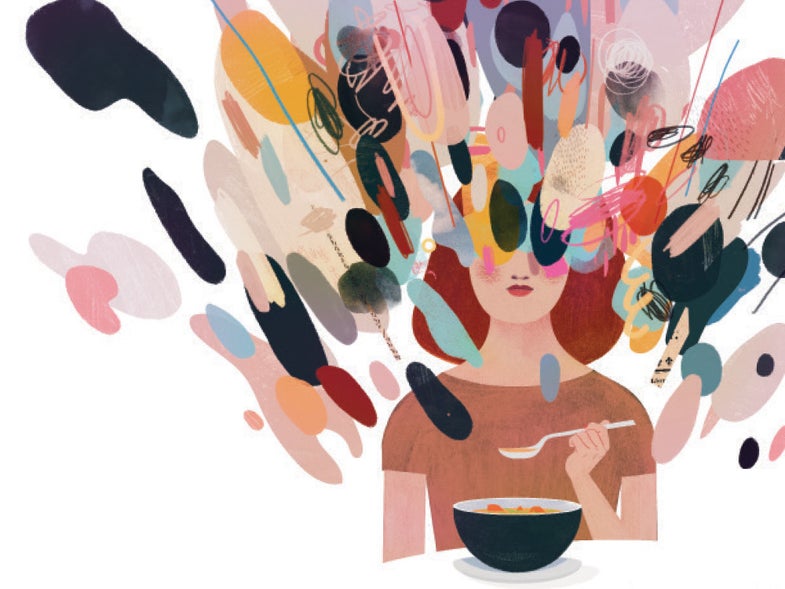 In 1994, I spent my first year of college at a university in Israel, in Ramat Gan, near Tel Aviv. Each Thursday and Saturday night, all of us American students would take a bus or a cab down to Ben Yehuda Street, in Jerusalem, and find the place exploding with the other American students. We sat on the floor of a lounge and drank hot wine in sugar-rimmed glasses. We danced at a club to a playlist that began with Ace of Base and ended with “Hotel California” every single night. We ate pizza made by people who had never met an Italian off of cardboard squares instead of plates. The boys ate shawarma, which I objected to for feminist reasons (meat being showcased on a spit—I don’t know, I felt strongly about this at the time) and we ate our weight in hummus and falafel. A month in, as we wandered the cobblestone streets of Jerusalem, I found a small, cafeteria-style vegetarian café called the Village Green. I ordered the vegetable soup. There was a never-ending loaf of bread that lived on the counter, and you could help yourself to as much as you wanted. “Have you ever had soup like this?” I asked my roommate, Marni. I ordered another bowl.

Marni and I went two times each week—in addition to Thursday and Saturday nights, which were party nights—because I loved this soup so much. Forty minutes to Jerusalem was nothing. We had no children. We had no jobs. We didn’t know what time was: How does a fish know water; how does a human know air? You want some soup? Well, then, go get some soup.

Back in Ramat Gan, we went to the market to try to re-create the soup. We bought carrots and tomatoes and onions and garlic. We bought powdered spices—it didn’t occur to us to use fresh herbs. We bought a root because it looked like something one would put in a soup. Literally, Marni said, “That looks like it belongs in soup.” (Years later I would learn to call this root parsnip.) Every night we didn’t go to the Village Green, we tried to make this soup in our dorm kitchen. Every night it didn’t taste like the soup at the Village Green. All our efforts amounted to something I can only call wet vegetables.

My mother, who lived in Israel until she was a teenager, came to visit me in March that year, bringing along my youngest sister, who was just a toddler. I introduced her to the soup, and she loved it, too. “Let’s go to Jerusalem for soup again,” she said to me on one of her last days there. She thought it was fancy and funny to go to a different city for soup, like saying, “Let’s go to Paris for lunch.” It was just me and her and my tiny sister, all our lives barely started, eating this wonderful soup and the hunks of bread you could just pull off by yourself. June came and Marni and I lay on our backs in the amphitheater, staring up at the sparkling sky, while we waited for a cab to pick us up to take us to the airport.

I can’t tell you exactly how or when it happened, but the sun went up and down and up and down and up and down and the earth tilted on its axis so that it became fall, then winter, then spring. I returned home for college. I wore a graduation gown. I wore a bridesmaid’s dress at Marni’s wedding. I wore a blazer to my first job interview. I wore a wedding dress. I wore maternity jeans, and right when I was ready to put them away I pulled them out again. I pushed a carriage down the street, then I pushed a carriage while I also wore a Baby Björn. I moved from here to there and back. I made hundreds of vegetable soups, and exactly none of them were remarkable. I made these soups and told whomever I served them to about the soup at the Village Green. I told them that every soup I made was an attempt, a tribute, a prayer.

My mother got older and still lovelier and now only eats soups she makes herself because of the salt. My youngest sister got married and had a child and then moved to Jerusalem, from Brooklyn, and had another child. I hadn’t met my new niece yet, so I took my younger son, the one who has picked up a surprising amount of Hebrew, and off we were on an El Al flight to Ben Gurion airport. A day off the plane, we took my sister and her two children to Ben Yehuda Street. “Just you wait,” I told her.

The Village Green has two locations now; neither is the one I remember. The first location closed a year after I left Israel, moving just two blocks away. It remained cafeteria style. A second location, this one with table service, opened just around the corner. It was not just vegetarian but vegan. On a shelf was Diet for a Small Planet, maybe even the same copy I had read over the many soups I ate a million years ago. I spoke with the owner of the restaurant. He told me he and his wife had developed all the soup recipes when they first opened, and that the recipe for the vegetable soup hadn’t varied at all. I ordered some hummus and cucumbers for my son and a bowl of vegetable soup for me.

How can I say this? The soup, it wasn’t familiar to me. It didn’t look like I remembered it. It didn’t smell like home or nostalgia or youth or a memory. I couldn’t find the taste of it anywhere in the neural superhighway of foods that mean something to me: my mother’s tuna sandwich, my father’s mashed potatoes. It was just a soup. It was just a vegetable soup. It wasn’t the thing I’d been chasing all these years (but if it wasn’t, what was?). And really, yes, it was good. It was fine. But I couldn’t reconcile this thing here with the thing I had dreamed of. I sat back in my chair and stared at the bowl. The soup was a stranger to me.

I turned 40 last year. I last ate that soup half my lifetime ago: before I was a mother, before I was a wife, before I was successful enough as a person that you would send me to Israel because I wanted to eat some soup. I have an excellent life. But like all things that grow tall, I’ve become increasingly rigid. I can’t sleep just anywhere anymore: My neck will hurt if I don’t have a particular medium-firm pillow; I started sleeping with an eye mask and earplugs. I can’t eat strawberries because the seeds get in my teeth. I won’t sit in the middle seat; I won’t sit in the back row; I won’t sit near the toilet. I won’t wear heels. I won’t go to the movies after the trailers have started. I won’t see the dentist’s partner because the dentist is sick today.

It is impossible to believe now, but I was someone who could be pleased by simple things once. Back then, everything was new to me: all the world and all the people and all the soups. My eyes were open. They haven’t closed since.

But who could know that it was youth and inexperience that was so delicious? Who could know that a condition of your growth and experience in the world would be that soup would go from perfect to good to okay? Who knew that growing taller would actually make you smaller? It would give you more preferences; it would make you too cynical to try something again in a new way. Eventually you would have to choose. If you loved the soup, you could stay with it and be content for life. But also if you loved the soup, you could go in search of it again and again, and each time it would wilt a little more on your tongue until suddenly you needed leeks and dill to make it palatable, until the leeks and the dill stopped working and nothing was good enough anymore.

God, I’ve made it all too complicated. That’s what I thought when I stared down at that soup, devastated by its regularness—by its very soupness. These days, the conditions for me to enjoy a hamburger are contingent on the bun having sesame seeds and astrological order and my menstrual cycle so that I won’t spit it into the sink or sneer at the person who made it for me. These days, I can’t put butter on bread without the bread having a texture to it, and I can’t eat vanilla ice cream unless there is something to bite like a chip or an almond in it. These days, if I am going to eat a vegetable soup, it has to be a vegetable soup that defeats ISIS and fades liver spots and cures belly fat, a vegetable soup that will send people screaming into streets like a postwar victory parade, grabbing women and kissing them and throwing babies in the air and catching them with big whoops. I will never enjoy simplicity again; it will never be good enough for me. I require so many more ingredients; I require so much more technique. I need to be danced for and entertained. I have made the region of my delight a tiny head of a pin. Did anyone tell me that it would be this exhausting to get older?

There’s no hunk of bread at the Village Green anymore. When I returned, the owner told me that people didn’t quite know how to handle the bread. They took too much. There was too much waste. Now they give you two slices at the register. It is still good bread. It is still good soup, really. There is a cream of spinach and broccoli soup I’m going to try next time, though. I turned my attention to my son, who was asking to try my soup, and then more and then more.