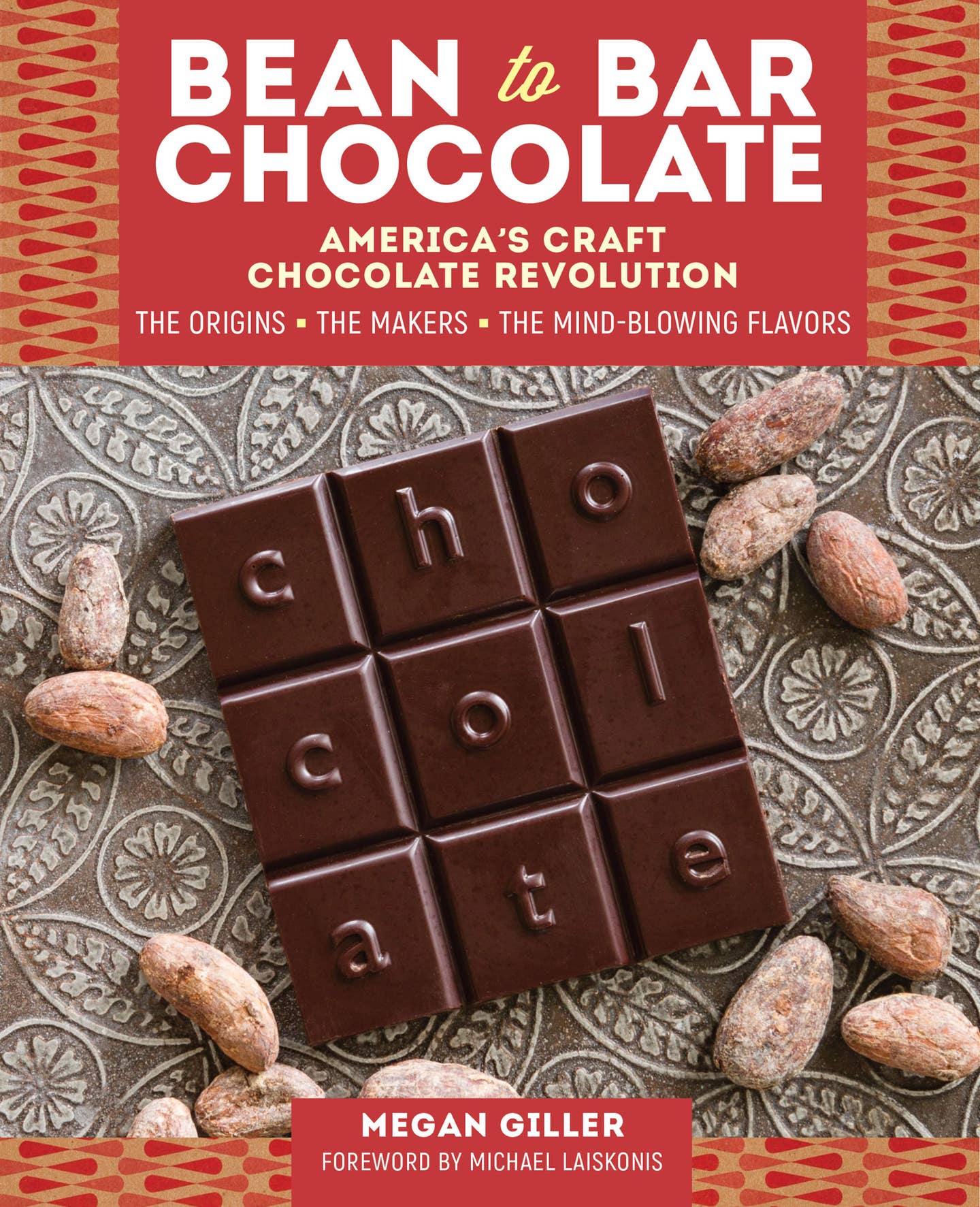 Megan Giller speaks of chocolate the way Michael Corleone does of the Mob. “Just when I think I’m done writing about it, there’s something else to pull me back in.” And as one of America’s foremost chocolate journalists, it seems she’s only just getting started.

Back in 2015, she launched Chocolate Noise, a beautifully designed monthly periodical, with each chapter profiling an American chocolate maker. Despite craft chocolate being A Thing since the mid-90s, and the bean-to-bar movement following well in the footsteps of the specialty coffee boom, few writers have dedicated such journalistic and literary attention to the personalities making American chocolate happen. Her stories were just that: stories, not trend pieces or industry insider chatter, examining the obsessions, science, ethics, and economics of making quality chocolate for the masses, at a geeky level of particularity that few publishers would allow.

After completing her initial plan of 12 profiles, she added on some more, and as these things go, the website became a book. Bean-to-Bar: America's Craft Chocolate Revolution comes out next week. Part cookbook, part story collection, and part visually-driven nerdery, it's a multifaceted crystallization of one idea: The $10 chocolate bar is here to stay, and it's only the beginning. I sat down with Giller to learn what the future holds for one of America's fastest growing food industries, and what it all means for our national sweet tooth.

The subtitle of your book is 'The Craft Chocolate Revolution,' which sounds pretty bold, but there really does seem to be a whole new bean-to-bar industry where there wasn't one before. What are there, a hundred craft chocolate makers in the U.S.?
Even more. Ten years ago there were...five? Now there are over 200. And John Nanci, who started the site called Chocolate Alchemy and figured out how to jerry-rig machines to make chocolate at home, has said that for every one maker who's at market, there are three or four more in their basements just learning how to make chocolate and about to launch. And it's only going to explode more over the next few years.

What's causing the boom? Greater access to machinery?
That's part of it. It's easier to find chocolate-making machines and figure out how to make your own. And there's also more resources for people, like Chocolate Alchemy. Dandelion Chocolate in San Francisco has a book coming out too, and it's very technical; I think it'll be so useful for the industry.

At the beginning, most makers had to start from scratch: “How do I roast these beans? What’s the right temperature? How long do I grind and refine?” But as people share more information, it’s going to become easier for newcomers.

Which gets to a sticking point I have about craft chocolate—some of it just isn't very good.
It's certainly on consumers' minds. It's not fun to pay $10 for a bar of chocolate and have it not be any good. And it's a big concern in the industry; there's a fear that if someone pays $10 for a bad bar of chocolate and is disappointed, maybe they'll never do it again. For the book I spoke to Michael Laiskonis, who does workshops on chocolate making. As he puts it, "it's easy to make chocolate. It's hard to make good chocolate."

It’s a tricky question. There are a lot of makers who are making really fantastic delicious stuff. Then there are others who are still figuring it out. But as the industry matures and more knowledge becomes accessible, I think it’s only going to get better.

There's a great spread in the book, a map of the world showing chocolate-producing regions with a cheat-sheet legend of how chocolates from those places taste. That's an incredible resource for those of us who are excited about chocolate and want to learn more, but of course there's variation within those regions too. How'd you approach putting that together?
Obviously when you look at each country or region, it's going to get a lot more complicated very quickly. So as you say, it's a cheat sheet, more of a jumping-off point for people than a definitive guide. Venezuelan chocolate will have many different profiles. Or look at Brazil. It's a huge country! It's impossible to say chocolate from there only tastes one way.

But when I was getting started in chocolate, I had no idea how to hold all the data I was getting about regions and profiles in my head. I wished I had a cheat sheet like this. So it was really a selfish thing to put it in there.

Sometimes when people obsessively hone in on terroir, they forget how much the manufacturing process matters.
Chocolate makers and farmers make 100 decisions about how they're going to manipulate their product. On the farm level, how you ferment and dry your beans is hugely important. For a long time, most people in the industry weren't paying much attention to how the beans were fermented at their origins, but now it's a big deal for a lot of producers.

As for the making side, take Madagascar, which is a very fruity bean and sometimes can taste like red fruit, but it can also have a lemon-lime citrus aspect. It can be so acidic that makers have to tame that flavor, burning off different acids in roasting, grinding, and refining to get it to taste good. There are so many ways to alter it.

Everyone has a Madagascar bar, and they all taste so different. But the crazy thing is most people are literally using the same beans from Akesson's plantation. You're just tasting the differences in how makers choose to roast, grind, and refine the beans.

Wow, is that happening in other regions?
More and more. In some ways it's really cool because, companies like Maya Mountain [now Uncommon Cacao] are doing great work growing and getting recognition. In another way it's kind of odd that you have maybe you know, 10 to 15 plantations / co-ops / companies that are now supplying beans to so many makers.

That's a complication for the mythos some craft chocolate companies write, of swashbucklers hunting through the forest for perfect beans no one else can find.
What this all comes down to, and what hasn't really been defined yet, is direct trade. Some makers really are spending time with farmers and working with them directly, and in some cases a few are making great efforts to work with communities. Take Askinosie's work in Tanzania. They started with a community living in extreme poverty without running water, so they went and built a well. They also started a school program for the kids. Soon Shawn [Askinosie] noticed many of the girls were dropping out, and when he asked why, people told him they were selling themselves to get food for their families, just one meal for the day. So he started a lunch program too, to help keep them in school.

This kind of justice work is an anomaly, and Shawn and his family are especially motivated by their faith, but on a broader level, people are also paying more for beans than they used to. Art Pollard of Amano Chocolate will spend a lot of time in chocolate regions and pay farmers three to five dollars a pound for beans. The market price used to be 80 cents.

Does the consolidation of growers help farmers negotiate better prices?
Absolutely. Maya Mountain is a great example of this. It's a private company that started in Belize and is now also in Guatemala that buys wet beans from farmers and dries and ferments them for chocolate makers. They ensure the beans are dried and fermented properly, which means they can charge higher prices.

They're not a co-op, but they use some profit-sharing models and have some other social justice goals. Before they started, you'd have coyotes showing up at farms, pointing guns at people, and saying, "I'll give you this much for your beans." Scary stuff.

Are there any ways for consumers to tell who's doing legit work and who's just calling themselves direct trade for show? Are there any conversations in the industry about labeling or certifications to define what the term means?
As far as I know now, not yet. The craft chocolate industry is still so young that I think it'll be a while before we see anything like that. There's still some basic education they're focusing on, like educating people about the difference between chocolate makers, who actually turn beans into chocolate, and chocolatiers, who make confections out of finished chocolate.

Right now, if someone writes on their packaging or website about their work with specific farms and how they source, I usually trust them. But as the industry grows—and you can take the coffee business as an example—makers will need to figure this out. I remember this one coffee company had two bags of beans, and one said “directly sourced,” and the other something like “sourced from the farmer,” and when I asked the difference, they couldn’t tell me.

Narratively, we're at a familiar point in bean-to-bar chocolate for a lot of specialty food industries. Everyone has all these single-origin bars, and we see photos of rugged chocolate farmers and read about how makers are all paying more attention to the minute variables of how chocolate is made. So where does it go from here?
Well, keep in mind that for thousands of years up until the mid-1800s, chocolate was primarily a drink. Historically speaking, the idea of eating chocolate in smooth, solid bar form is a relatively recent one, and people learning how to perfect the specific flavors of chocolate is pretty new. People right now are making the best bars of chocolate anyone has ever tasted.

But I know what you mean about that wall. Some makers hit it and don’t know where to go, while others are experimenting more. This’ll sound a little cheesy, but each bean has so many different ways it wants to be expressed.

We're seeing interesting work done with inclusions, and playing with alternative sugars. But what I keep winding up discussing with makers is how to build a sharing culture around chocolate, which is much easier to bake into coffee or beer. Maybe you bring some chocolate bars to a party to share, but as of now you don't go out with your friends on Saturday night to eat chocolate bars.

In Montreal, strangely, they have this huge culture of drinking chocolate, and all these places offer it. I don't mean hot chocolate. I mean literally a melted bar that you drink from a snifter, and you can add a little bit of hot water, milk, or whatever to it to get the right texture for you. Crazy, right? You walk into some of these places and they’ll be as crowded as a pub some nights. They use decently good chocolate. But I can’t help imagining how great it’d be if they used the insanely good stuff we can get today.