What Happens When You Throw a 4-Course Dinner Party Without Any Silverware? 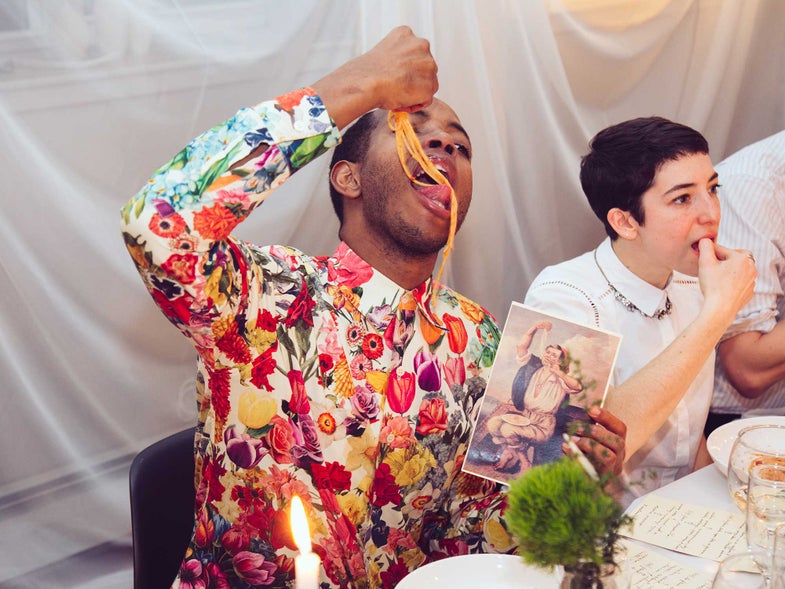 There’s nothing like validating indulgent bad habits. Silverware has always felt like more of a nuisance to me, an awkward, overly formal, metallic intrusion into my meal, and so I often find ways to do without. But it’s not in good form to eschew the civilized fork—or so the tired etiquette goes. What would a modern dinner party look like if we cut out not just the fork, but silverware altogether?

To find out, I collaborated with an artist-slash-chef friend, A.M. Bang, to devise a menu of dishes that would be both a challenge and a delight to eat without any utensils. We invited 20 guests, telling them they’d be learning about the history of utensils but keeping secret that dinner would be utensil-free. And we set the stage with every other marker of formality—wine glasses for each course, silver candlesticks, and a draping tablecloth.

The history of the fork is a convoluted one, and fairly recent. Back in 1860s southern Italy, particularly around Naples, eating pasta with your hands was common practice. Macaroni-style extruded noodles had recently been made more available with the invention of a dry pasta machine, and the noodles proliferated as a fork-free street food. The mangiamaccheroni (“macaroni eater”) became something of a regional icon: the image of a street boy eating pasta with his fingers. In paintings from the time, young boys lift the strands high, and toss their heads back to drape the long noodles into their mouths.

Why didn’t they use forks? They most likely didn’t have them. After some digging through Feeding Desire: Design and the Tools of the Table, I discovered that the table fork as we know it is a relatively recent dining imperative—it showed up in Europe in the 11th century, popularized by a trendsetting Byzantine princess named Theodora Anna Doukaina. She was married to Giovanni, the son of the Doge of Venice, and brought with her tiny golden forks, which she used for their wedding feast. The rest of Europe found this practice pretentious, effeminate, and even ungodly. (The fork’s resemblance to a Devil’s pitchfork certainly didn’t help.)

Europeans resisted the fork for centuries, and only slowly did it begin to communicate civility and dignity at the tables of nobility. Eventually, the high courts of Europe had discovered its undeniable usefulness for succulents and sweetmeats (preserved fruits and dainty confections). But even as late as the early 1900s, peasants in Germany often didn’t own full sets of silverware; average people across Europe made do with thick slices of bread to scoop up stews and soups for centuries.

Perhaps the gangling metal implements are not so crucial after all. You’ll find highly ritualized traditions of eating with your hands from Africa through to the Indian subcontinent. Ancient Greek philosophers and politicians ate meat with their hands during lavish symposia. And wadding up a ball of starchy fufu to sop up a West African soup follows table manners just as stringent as knowing when to use a salad fork.

When we served our roasted kabocha squash and fennel soup without a spoon, our guests figured out the ploy. They began tearing off hunks of bread to soak it up, and eventually drank it straight from their bowls. They enthusiastically greeted the following courses—spaghetti with a smoked paprika sauce; steak with winter cabbage and juniper berries; panna cotta topped with a honey cranberry syrup—as a fun kind of puzzle, and an indulgent excuse to make a bit of a mess. Maybe it’s time for the mangiamaccheroni to make a comeback.