Diving for Dinner: How to Hunt an Octopus in Greece

Trident gun fishing is only for the bold; we follow one young hunter on the path to catch the smartest prey in the sea 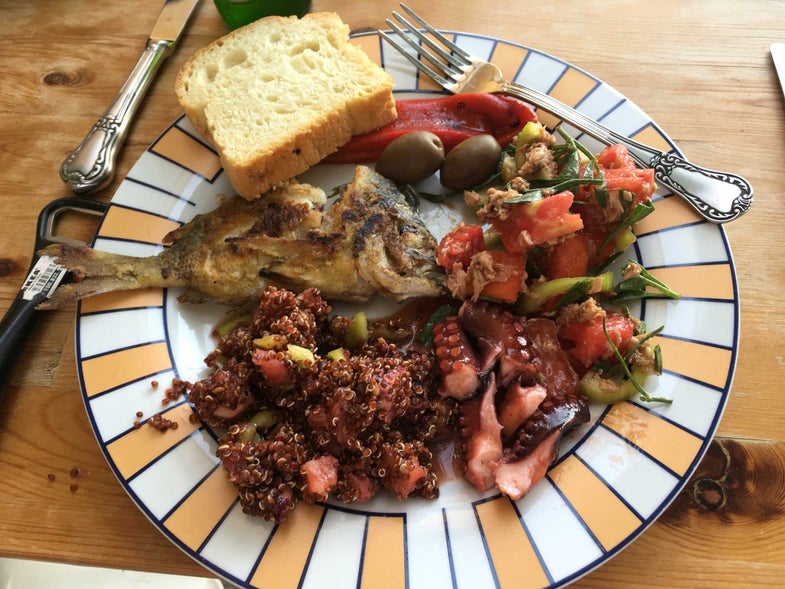 My friend Danai keeps all her fishing supplies in one corner of her beach house. There are things like flippers, snorkels, and masks; a buoy that you wear around your waist to alert incoming boats that you’re in the water; and…a trident gun?

“What do you do with that?” I asked her. It was probably a stupid question, but was the gun even real? Was this some kind of staple for every Greek beach house, like the seashells my grandparents keep in jars at their Florida condo?

“Hunt octopus,” she replied with a sailor’s nonchalance.

When Danai hits the beach in Chalkidiki, a series of peninsulas outside of Thessaloniki on the northeastern coast of mainland Greece, she dives into the sea to pull up barnacles and urchin, cracking them open with a short knife or her fingers and eating them on the spot. For me, the prospect of stepping on an urchin ranks up there with burning my hand on a stove, but eating them with Danai is something I look forward to every time I’m in Greece.

Trident gun hunting is a sport for the young. Danai personally knows four other hunters—all men, all 20 to 35 years old. Beyond that, she hasn’t heard of many others who still do it.

Danai’s beach house sits on a hill above the water, and the hillside is dotted with trees and plants that end at the sand. Once you reach the water, the beach is basically private, with only a few stray sunbathers that occasionally wander over from the nearby hotel. There are misty hills that sit over the water in the distance, some other parts of mainland Greece, but there’s also the occasional uninhabited island—Danai and her cousins call one of them “Turtle Island” for the way it gently slopes in and out of the water.

That house has always been part of Danai’s life. As we snorkled through the endless blue, she pointed out a forest of seaweed that was so large and dense, I thought it must have been there forever, but she told me it must have only happened in the last few months. She knows where the most abrupt dropoffs are, and where rockiness gives way to sandy beach.

And, of course, she knows the best hunting grounds. Finding barnacles and urchins are fairly straightforward; they’re sitting all over and around the rocks near the beach, and while they take some work to pry off the rocks, they’re easy catches. Danai, who has been doing this for years, learned from her parents, and she now knows all the things you should and must do before eating the world’s freshest seafood.

For barnacles, one of the most important things is to make sure it’s still stuck to the rocks when you find it. If not, it’s probably dead, and if that’s the case, do not eat it. Toss it back into the sea and move on to the next one. Once you peel it off the rocks, you can use another shell or a knife to pull it out. Rip out the blackish grey guts, pleasantly chewy with a splash of brine, and enjoy.

Urchins require a bit more work, but they’re even more delicious. Danai found one that was covered in rocks and seaweed (the females, which carry the roe we actually eat, can be spotted by little bits of seaweed stuck in their spines) and cut it open on a nearby rock. Once you pick the guts out, you’re left with a small amount of orange roe that’s as pure and bright as the water on the beach.

But there isn’t a straightforward guide to pulling your own octopus out of the sea. Octopi are smart; they know how to hide, and unless you know how to spot a nest or its eyes peeking out of the murk, you may never find one. Aside from one that was hiding in a cinder block, I never saw where they were until Danai pointed them out.

Once you shoot it, you pull the line to drag the trident back to you, and hopefully you have an octopus attached to the end. Sometimes, though, the sea fights back.

Hitting an octopus doesn’t mean you kill it. It pulls back at you, and worse than that, it’ll try to bite you with the beak that sits at the bottom of the head while grappling you with its tentacles. It may also ink you, which is great to watch, but only if it’s not happening to you.

You kill an octopus by flipping the head inside out and removing the brains and anything else you find in there. At one point, Danai was struggling with one that inked her partly out of the water. Splattered in blackish brown ink, she also had pieces of its tentacles wrapped around her arm, and she later showed me the “hickies” it left behind—a series of small red blotches from its suckers.

But Danai’s work wasn’t done. When an octopus dies, its normally lithe body turns incredibly rigid. The classical Greek solution to tenderize the flesh is to beat it against whatever hard surface is nearby, be it rocks on the beach or pavement in town. And tradition dictates that this beating has to happen 40 times, although I believe Danai stopped before that, opting instead to rub the tentacles with her fingers to figure out how tender they were getting. Later steps include popping the eyeballs, an important precaution to keep them from bursting and potentially injuring you during cooking.

The end result, though, is well worth it. The Greeks are some of the world’s greatest octopus chefs, and Danai’s mother didn’t disappoint. She boiled one simply to dress with nothing more than olive oil and salt. She grilled another until it developed a deep char, then mixed it into a quinoa salad. Add in some juicy summer tomatoes and a few extra fish Danai had speared while hunting and you have a meal worth fighting for.