A lifelong student of pasta-making in the U.S. and Italy, Linda Miller Nicholson is now a breakout star for her mesmerizing technicolor carbs 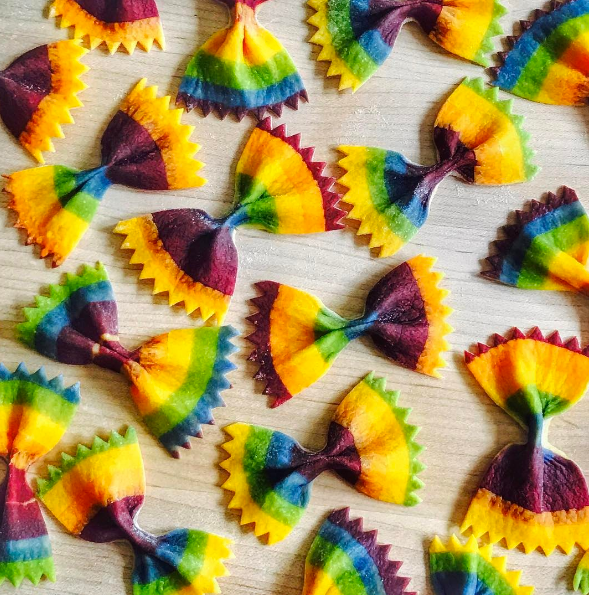 About 30 chicken eggs, in an assortment of pastel shades, sit in an elegant and ombré row above the mantel in Linda Miller Nicholson’s high-ceilinged living room. The shrine-like display would be out of place in most homes, but it makes perfect sense for a woman who has made her name from the product of those eggs and the use of color: Nicholson, known as SaltySeattle on Instagram, is a pasta artist.

Using plant-based ingredients to create vibrant hues, and everything from knitting needles to a traditional Italian chitarra to shape them, she turns simple doughs into mesmerizing masterpieces, drawing inspiration from high fashion, fine art, and everyday life.

Long ribbons of pasta in hot pink, jet black, and baby blue stream from the noodle roller in Nicholson’s outdoor kitchen. From her deep repertoire of color and shape knowledge, she’ll turn them into designs commissioned by various companies: maybe a logo, to match athleisure clothing prints for Kate Hudson’s Fabletics, and Katy Perry’s single cover. Other times, she’s just creating for herself—the dress she made entirely from pasta was a personal project—her book, or her huge, fanatic internet audience.

Nicholson earned her 76,000 Instagram followers and minor food-celebrity status for her bright colors and whimsical designs. But behind the rainbow lasagna, emoji ravioli, and pasta-fied Renaissance paintings is a deep knowledge of pasta traditions, styles, and techniques, learned from grandparents–her own and those of other people–professional chefs, and a lifetime of practice.

Summers for Nicholson as a kid meant learning how to make noodles from her German grandfather. At the age of four she was rolling them out with walnut pin on a rickety table and hanging them to dry on the backs of chairs. As a vegetarian at a young age, Italy’s noodle culture offered a conveniently meat-free food with which to become obsessed. When she first visited the country at age 18, and then later when she moved there to teach English at age 26, she did her best to learn everything she could about pasta.

While she has no professional training, she’s quick to clarify, “I’m not self-taught.” She spent time wandering into the kitchens of agriturismo and her friends’ grandparents, observing and learning. “Watching a matriarch cook,” she says of her time in Italian kitchens, “was far more vital than any of the few formal classes I took.” Back in the U.S., she continued her noodle education by spending time with Japanese soba maker Mutsuko Soma. She even reached out to the Seattle location of the famed soup dumpling house Din Tai Fung about an internship, but was rejected because it turns out they don’t train left-handed cooks.

And yet, despite launching a successful food blog and competing on MasterChef, she hadn’t found quite the right outlet for her pasta passion. Until she stumbled right on it, in the most relatable of ways: trying to get her kid to eat more healthfully. “I thought, maybe if I added nettles, or beets, it would be like Play-doh.” Making pasta became a mother-son activity—even though it sometimes meant forgoing traditional Italian shapes in favor of Minecraft cookie cutters.

These days she uses activated charcoal to make black, tracking down butterfly pea flowers to mix a true blue, and fine-tuning her purple with beets and blueberries. “You can make any shade in the world,” she says, as long as you have some idea of what to do. She tints her orange with harissa, her yellow with turmeric. Green comes from chard or spinach. Besides the color, she uses nothing but flour and fresh eggs from her “ladies,” the chickens she keeps in her ex-urban home outside Seattle (where she also has goats, dogs, and the occasional, less-welcome snake).

Once she rolls out the dough into long noodles, Nicholson gets whimsical with the shapes: making rainbow curlicues of telephone wire-esque fusilli, practicing pleating primary-color Chinese soup dumplings, and even arranging pasta-themed political statements.

Nicholson recently finished up the manuscript for her book (out from Harper Collins next year), but still finds new ideas everywhere she looks, including one of her other loves: fashion. “Sometimes I weird people out because I stop them at parties to take a picture of their shirt,” she admits, so she can later make it into a pasta. She’s also started making copies of famous paintings with her noodles, quickly learning it was all about finding the lines—even if her mother called to comment on her Girl With a Pearl Earring to say, “Who is that, I know her!”