How did the most beloved street snack from one small Mexican village become the regional phenomenon they are today? 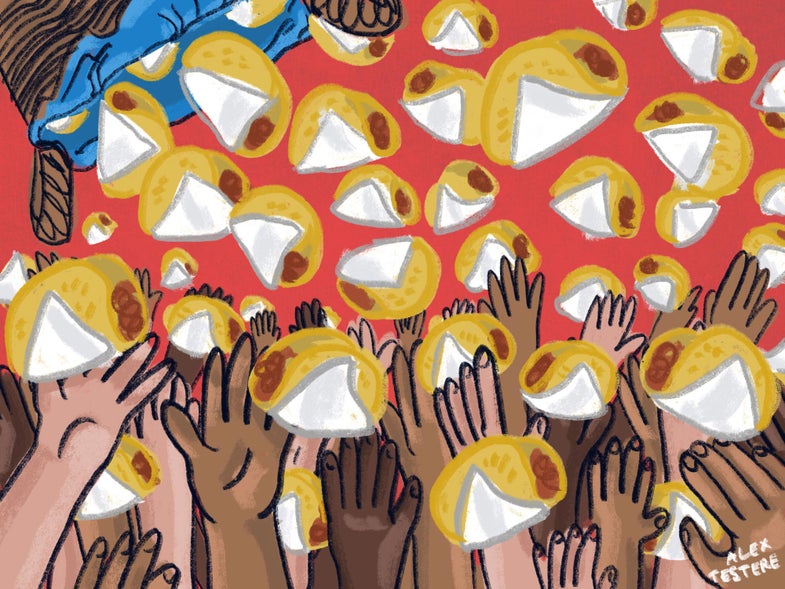 It was the first Sunday in December and some 6,000 people streamed up and down the steep incline of San Vicente Xiloxochitla’s main street, ignoring the various stands selling pizzas and ice cream and liter-size micheladas. In every hand was a small half-moon of tortilla, sweating through a thin sheet of white paper. Throughout the day, more than 250 taco vendors would park their bikes in the plaza and deliver thousands of free tacos into a sea of grasping hands, while chants of “Ta-que-ro! Ta-que-ro!” hung in the air. It was the 13th annual Feria del Taco de Canasta—the Basket Taco Festival—a celebration of the humble snack made and sold by more than 80% of San Vicente’s 5,000-strong population.

While many of these basket tacos come from villages like San Vicente, about two hours east of Mexico City in the state of Tlaxcala, there is nothing more chilango than tacos de canasta. A hallmark of Mexico City street food, they’re moist and fat-slicked and typically stuffed with one of four basic fillings (mashed potato, refried beans, minced pork, or chicken in adobo), and they take their name from the woven baskets that vendors use to carry them around. Made fresh each morning and wrapped in an instantly recognizable sky-blue plastic sheet to keep them warm, the tacos are sold all throughout the capital—in tiny storefronts, off plastic tables set up at busy intersections, and, most characteristically, from the backs of bicycles.

Food festivals like San Vicente’s Feria del Taco de Canasta are everywhere in Mexico. For the villages that host them, they’re not merely a way of celebrating Mexico’s singular culinary heritage, but also a way of staking a claim to part of that heritage. They also serve to help stave off the loss of identity that inevitably follows the loss of population as successive generations of young people move to the big city. These events do draw in visitors and money, but most of all, they keep places like San Vicente on the map. San Vicente likes to bill itself as the one true home of the capital’s most emblematic dish, but like most everything in Mexico’s mammoth capital, the taco de canasta belongs to many places at once, created primarily by the drift of population between town and country that defined Mexico City in the 20th century.

But where did it all begin? Tortillas as we know them today likely originated here in the state of Tlaxcala—its name translates roughly from Nahuatl as “the place of the tortillas”—but the first written mention of a taco didn’t appear until 1890, in reference to a dish consumed in the silver mines of Real de Monte in the neighboring state of Hidalgo. According to Jeffrey Pilcher, author of Planet Taco: A Global History of Mexican Food, those first tacos were probably quite similar to what we now know as a taco de canasta: a small tortilla folded around a simple, stewed filling and packed tightly in napkins to keep it warm.

“By 1900,” Pilcher says, “they were everywhere.” The first known photograph of a taco, taken around 1920 in Mexico City, shows a group of paperboys gathered around a woman selling tacos out of a basket. “What’s now called tacos de canasta,” Pilcher says, “was originally tacos mineros“—miners’ tacos.

That simple taco found its way to San Vicente via a man called Marcial Balderas. In 1948, when he was only 14 years old, Balderas moved from San Vicente, then an agricultural village, to Mexico City, part of the first wave of mass migration that, in just a few decades, would turn it into the world’s largest metropolis. Shortly after arriving, Balderas met a woman called Cristina Mendoza, originally from Guadalajara, who, he says, taught him how to make what she referred to as tacos sudados, literally “sweated tacos.” (Where she learned to make them he never found out). Each morning, he would fold his tortillas around hot fillings, pack them tightly into a basket lined with hand-embroidered napkins, and take them to a sidewalk in front of a school in the neighborhood of Tlatelolco to sell them.

Three years later, Balderas left the taco business to take on better-paid work laying pipes and installing plumbing in the rapidly expanding city. By then, he’d passed the skill on to a handful of other young migrants from San Vicente who, like him, had come to the capital for work. The trade picked up slowly in the 1950s and, like the city it served, exploded in the ’60s. The burgeoning workforce needed to be fed, and San Vicente’s growing army of taqueros was happy to oblige.

Irad Santacruz Arciniega, a chef in Tlaxcala’s capital, also called Tlaxcala, has devoted his career to research on the cuisine of his home state, the cradle of agriculture in Mesoamerica. “In those days,” Santacruz told me, “many people from town would go on pilgrimage to the Basilica of the Virgin of Guadalupe [in Mexico City] and they would take their bikes and their canastas filled with tacos. People would start to ask them where they had gotten their tacos and that’s why they started to sell them.” The canastas, he went on, would most likely have come from the nearby basket-weaving town of Santa Apolonia Teacalco. “This, I’m sure, is one of the reasons it became so popular [in San Vicente],” he says.

Then, as now, some taqueros moved to the city full-time, as Balderas had, while others spent weekends back home in the pueblo. Still others commuted daily, making their guisados at home with their wives, buying their 14-centimeter tortillas from a growing number of local tortillerias, packing in the early hours of the morning, and carrying their bikes and baskets to the city, often on a series of public buses. “I’ve told people here, if I hadn’t come back with these tacos, then my village would have nothing,” Balderas, now 86, likes to say. When I asked why he hadn’t come down to the feria that day, he threw up his hands in frustration: “They didn’t invite me!”

The idea for the feria came from another San Vicente taquero, Zeferino Ruiz, who first started selling tacos in 1978 when he was 15 years old. For his first 20 years as a taquero, Ruiz worked the streets of Mexico City, but eventually, he says, “it just got too saturated, so I moved out to Cholula,” a scenic university town two hours southeast of Mexico City and about 50 miles from San Vicente. San Vicente was already half a century into its taco de canasta boom and neighboring villages were catching on.

“I was there in Cholula, right? And people from Nopalucan [the next town over] started turning up with baskets,” Ruiz recalled, still quietly exasperated at their audacity. Customers in Cholula, he said, didn’t know the difference between his tacos—the “real” ones from San Vicente—and the those sold by the interlopers. “They thought we were the same.”

Aggressively nonchalant in aviators, a fedora, and a pale blue shirt unbuttoned to the base of his sternum, Ruiz revealed his next move with a sly smirk. “So I decided to change the color of the plastic in my basket so everyone would know which was the real thing.” He tilted his head toward his basket, lined with a white plastic sheet, a subtle but obvious contrast to the blue plastic that most taqueros still use. “Now everyone [in Cholula] knows to look for the white basket.”

Ruiz developed the festival for much the same reason, as an attempt to stake San Vicente’s claim to one of the most popular forms of sustenance in Mexico’s densely populated central valleys. “We started this feria so people would recognize that this is our taco,” he said, “that it comes from here.”

Whether the taco de canasta is the product of a particular man or woman, whether it’s really from San Vicente or Mexico City or Guadalajara or the abandoned barracks of a defunct silver mine is really beside the point. Who’s to say when something as elemental as a small, sweaty taco served out of a basket becomes a specific dish, or when you start calling it by a particular name. Tacos mineros, tacos sudados, tacos de canasta; they all have their part to play in the creation of a tradition, both for an immense metropolis and a small village that, without it, might well have disappeared. Traditions, after all, need their origin stories.

Today, the taco de canasta is from both everywhere and nowhere, a decidedly Mexico City dish served in cities and towns throughout central Mexico, prepared by people from anywhere looking for a way to get by. San Vicente describes itself as “the cradle of the taco de canasta,” but really San Vicente is just one part of its history. “As they say,” Ruiz told me as he packed away his empty basket, gripped the handles of his battered bicycle, and prepared to make his way home through the crowds, “there’s enough to go around.”