Céline Dion is Now in the Jewish Deli Business

Two Québécois legends are better than one 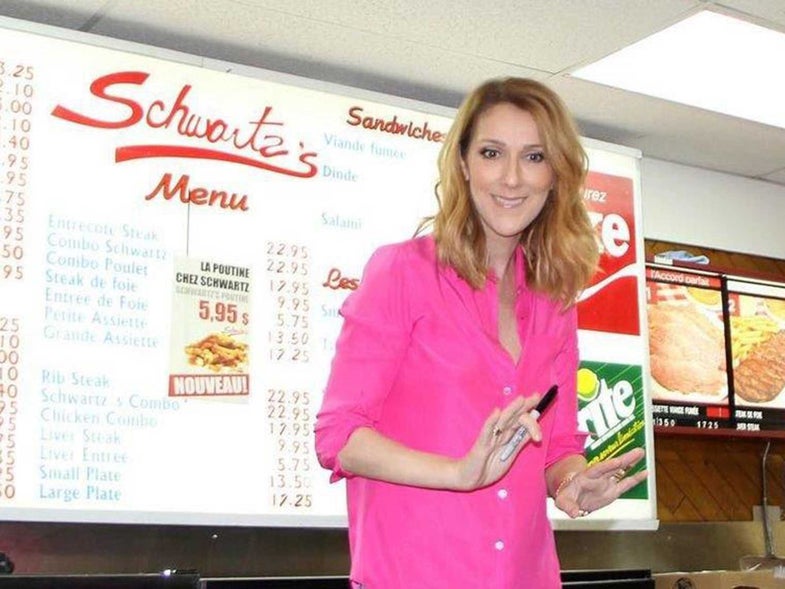 Celebrity-owned restaurant ventures are nothing new—just look at Justin Timberlake’s Southern Hospitality in NYC or Scarlett Johansson’s Yummy Pop in Paris. But rarely does the restaurant live up to the star power behind it, hence, the ever-growing list of notorious celebrity restaurant failures. That’s certainly not the case at Schwartz’s, a longtime Montreal institution that’s been given a boost by another local legend: Celine Dion.

Times are tough for the Jewish deli: one of New York City’s most well-known establishments, Carnegie Deli, serve its last pastrami sandwich last month. And in Los Angeles, two well-known icons Billy’s and Solley’s closed their doors in 2015. But Schwartz’s, founded in 1928, shows no sign of slowing down, according to PRI. Frank Silva, general manager for over 36 years, says the deli is one of the few in town that still does things the old-school way, marinating the meat for up to 10 days.

That attention to detail has clearly paid off. Dion, a customer of over 20 years, decided to buy in along with restaurateur Paul Nakis, who was the latest owner to take over the space (it had been passed through several different hands after the death of the original owner, Reuben Schwartz). While some may find it odd that a Catholic pop sensation would have stake in a traditional Jewish establishment, Silva is proud to have Dion on board.

“She is a Quebec legend, just like we are,” Silva tells SAVEUR. “She and her husband has been coming here for many years, and we’re happy she is a part of the family.”