Throw your vocabulary out with the compost pile 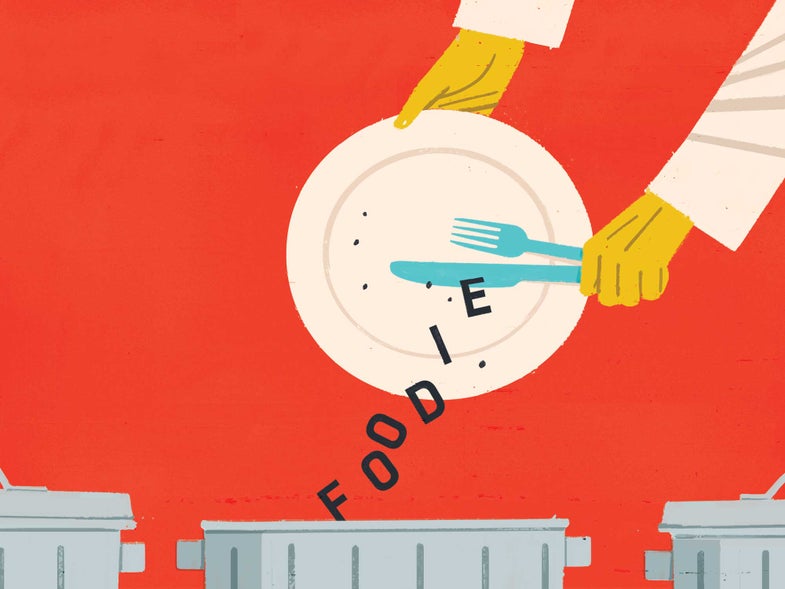 But really. Let’s be done with that goofy word, that epithet for tone-deaf epicures. It’s always been an infantilizing label. Worse: It’s self-infantilizing. (Know any avid photographers who eagerly introduce themselves as “shutterbugs”? I’m guessing not.) The real problem with the word is the way it’s designed to divide: the folks who claim the title as a way of standing above the food-as-fuel fray from those who deploy the term as derogatory shorthand for what they view as a probably vapid, definitely elitist fixation with what we put in our mouths. So let’s let the bracing winds of a new season usher in a new era of saying…something else. Maybe we don’t need a catchall word for people who appreciate a great meal and what goes into it. Maybe we can just focus on the pleasures of eating, cooking, and drinking and leave labels where they belong—on modified corn and the side of wine bottles.

I’d call it a New Year’s resolution, but we never use that term around the office much anyway. We tend to go with culinary enthusiasts, like-minded food nerds, or simply “SAVEUR readers.” We called a few of these folks to hear their resolutions for 2016.

Baker and author Dorie Greenspan vows to “make a fuss over breakfast. I’ll probably still eat at my desk, but at least I’ll be eating breakfast,” she says. Baker, author, and Milk Bar empire-builder Christina Tosi plans to make a lot of meals for her friends at home: “There is nothing better than inviting friends for brunch, lunch, or dinner, or a snack-filled slumber party!” Dan Barber of Blue Hill plans to spend more time at home, too, some of it actually sitting down. “My wife, Aria, can’t understand why I’m unable to simultaneously sit and eat. I stand, or as she says, ‘rock back and forth like a crazy’ while I’m rooting and grazing through the pantry. My New Year’s resolution is simple: I want to learn to eat while sitting down.”

Wayward Canadian and Southern chef Hugh Acheson resolves to “make more omelets this year, but not be all OCD about it.” And he doesn’t want to hear that you’re over kale. “I resolve to defend kale from all attackers. I still love kale, people.” For Susan Feniger (Border Grill, Mud Hen Tavern), it’s not about what to eat but when: “No more big bowls of buttered, salted popcorn after midnight. Only before midnight!”

Finally, Jody Williams of Buvette, in both Paris and New York, has simple goals: “To start drinking seriously again. This is my year of single malts. I promise to gain an intimate knowledge and appreciation of the grain.”

Curious drinkers and committed breakfast-makers. Stay-at-home dinner party throwers. Reformed pantry grazers. Clearly these are our kind of folks—whatever you call them.