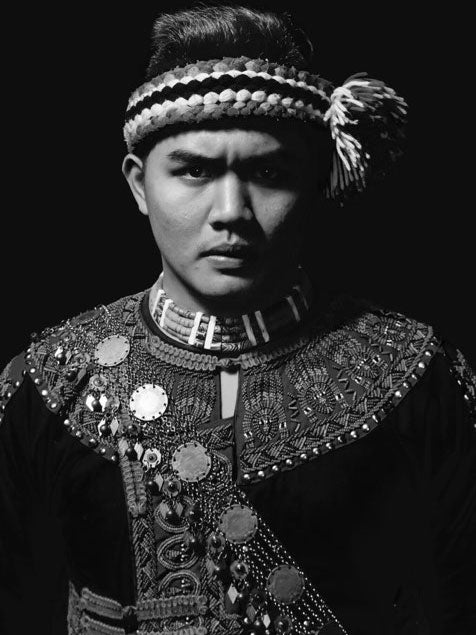 Cegaw Lrakadrangilra was 23 years old when he killed his first muntjac deer. For three years, the elders of the village had been taking him and his friends up into the mountains, pointing out animals and landmarks in the 70,000 acres of wilderness that once belonged to their tribe. Tiyananece is the place with wild tangerines. Tabilibila is the point where two rivers meet and where there are a lot of quality stone slabs.

“It wasn’t about shooting. They were teaching me how to identify animals, read the landmarks, and how to adjust my eyes at night,” he says. “Hunting is more about having a relationship with the mountains than killing things.”

When he shot his first muntjac, he had to process it immediately. He took out its organs and lugged the meat back down to the village.

“I like to roast muntjac,” he says. “Every man is expected to know how to cook the game that they catch. The masked palm civet is good cooked with sesame oil, soy sauce, and rice wine. Boar is nice when grilled with salt.”

Lrakadrangilra is a member of Taromak, an indigenous village in Taitung County, Taiwan. Taromak refers to both the village and the tribe. They are part of the Rukai people, one of 16 recognized indigenous Austronesian linguistic groups in Taiwan of which there are many sub-sets.

Lrakadrangilra, now 30 years old, is currently the elected leader of the alakowa, or man’s house in the Taromak language. Indigenous tribes in Taiwan are stratified by age groups and the alakowa is the group that the men enter once they are adults—around 13 years of age. It is in these groups that men are taught how to read the mountains, set traps, hunt, and cook.

In 2015, Lrakadrangilra was taken on a six-day hunting trip into a deep part of the mountains, where the elders taught the group how to rappel down cliff faces using ropes made out of rattan and navigate to a secret area with robust populations of deer and boar.

“I’d never seen that many animals in one place,” he says. “It felt unreal. But it taught me to trust the elders. One day I will have to teach those same lessons.”

Part of Lrakadrangilra’s job as the leader of the alakowa is to organize hunting forays into the mountains. He admits it’s difficult as most young men hold full-time job in the cities. But it’s a roadblock he’s dedicated his life to overcoming.

“Hunting is how we learn to become a complete person. You aren’t just hunting an animal. You’re dealing with the entire environment and all of the conditions that comes with being in the middle of nature,” he says. “Through hunting, you learn how to appreciate your food. People are calling us savages and saying that hunting is violent. But the industrial food system is worse.”

In recent years, there’s been a growing grassroots initiative among indigenous tribes in Taiwan to revive waning practices like hunting. The colonization of Taiwan by Japanese settlers in 1895 and then Chinese settlers in 1945 deeply disrupted indigenous societies. Many mountain-based tribes like Taromak were pulled down from their ancestral mountainous dwellings by the Japanese and forced to settle on flatland. When the Chinese came, they were forbidden from speaking their indigenous languages. As a result, many folks were forced to assimilate into Chinese society and leave their traditional ways of life.

“At least Taromak still has elders to teach them how to hunt,” Siyawwi Ruvulreng, a 38-year-old hunter from Kasavakan, a neighboring tribe from the Beinan ethnic group says. “We’ve had to learn mostly by ourselves. Our ancestors were colonized and pulled down from the mountain earlier than Taromak and many things have been completely lost. I mean, we all speak in Chinese now. It’s terrifying.”

In Kasavakan, there are only around ten men left out of a population of 600 who regularly hunt. Most of them, all in their late 20s to 30s, have been taught by Joung, a 35-year-old tribe member who started hunting with the elders at the age of 14.

“I don’t know why the elders chose me to go up with them,” Joung says. “I guess I was just the only kid that was interested and stuck with them throughout the years. A lot of my peers just didn’t care.”

Today, he functions as the de facto hunting teacher of the community. He’s particularly good at setting traps for small game. Because of the steep decline in traditional knowledge, the youths in Kasavakan have been especially diligent about preserving and re-learning their hunting traditions. They’ll go on monthly treks and even invite women to participate, which had been taboo.

“I haven’t shot anything, but just the process of going up to the mountains itself is meaningful,” 27-year-old Masako Makakelen says. “I’ve learned to quiet my mind as we walk up and get in tune with my hidden senses.” As a woman, Makakelen is allowed to accompany her tribe members on casual hunts but is forbidden from going into the hunting grounds during certain holidays. Still, she is vigilant on documenting as much information as possible for preservation purposes.

Though they are neighboring tribes from adjacent mountains, both Kasavakan and Taromak have unique hunting rituals specific to their tribe. Before hunting, Kasavakan men will pay their respects to the ancestors by throwing clay beads on the ground; Taromak hunters will offer betel nuts and rice wine. In Taromak, a sight of a piper viper on a hunting trail means that there is danger ahead. For Kasavakan people, that signal is a foul fragrance in the air. Taromak hunters will be gifted a white lily to put in their hair when they have killed five boars; Kasavakan hunters do not have that tradition.

Unfortunately, not every tribe has as much of a cohesive youth revitalization program when it comes to hunting.

“First time I went spearfishing, I went by myself,” Martin Fogle, 29, says. “I borrowed a light and I had a pole spear. To be honest, I’m still terrible at it.”

Fogle is of the Torik tribe, located on the seaside coast of Taitung County in a small beachside town called Douli. Born to an American father and a Torik mother, Fogle moved to Taiwan right after high school and immersed himself in his indigenous village. Torik is part of the Amis ethnic group and they used to depend on the ocean for their major source of protein.

Yet in his village, Fogle says that there are only two guys under the age of 40 who know how to spearfish—himself included. In the Amis culture, spearfishing was a rite of passage for all the men.

“We’re trying. I have two or three distant cousins who want to start diving for sea urchins. It’s an important cultural aspect of the tribe; see urchins are vital to our harvest festival. The problem is that they just haven’t found time for it yet,” he says.

Fogle points out that in his six years of spearfishing, he’s noticed a significant decline in coastal fish and visibility due to dredging and overfishing. Overfishing is a problem that has plagued Taiwan’s fisheries since the 1950s, and in the past three decades, the number of coastal fish species found in the waters off northern Taiwan has declined from 120 to 30.

“Yet the government is trying to pass regulations on spearfishing,” Fogle adds, with a hint of bitterness in his voice.

Mountainous tribes like Taromak and Kasavakan have similar problems. Until early 2017, hunting was technically illegal in the eyes of the Taiwanese government.

“People have to register their guns and they also must apply to take the guns out,” says lawyer Chris Upton, a 2017 Fulbright Fellow who is conducting research in Taiwanese hunting laws. “They do this by indicating the animals that they’re going to be hunting, where the hunt will take place, where it will take place, and who’s going to go out.”

But for many indigenous hunters, this is a concept that goes against their core values. “We don’t go up a mountain with an idea of what we want to hunt. We take what our ancestors provide us.” Lrakadrangilra says. “How can we register what we don’t know?”

The politics of indigenous hunting and spearfishing is still quite contentious in Taiwanese society. The government wants all catch to be documented for conservation purposes; many indigenous leaders want autonomy and stress that they already have conservation policies interwoven into their culture already. In Torik, only April to October are designated for fishing; the other months are for the ocean to rest. In Taromak, hunting grounds are constantly being rotated and there are certain locations where it is taboo to hunt because they are breeding grounds for animals.

“We managed and balanced the ecology of this island for thousands of years before the colonists came,” Ruvulreng says. “It’s ridiculous how they don’t trust us.”

Lrakadrangilra concurs. For him, hunting is both a political and spiritual act.

“We don’t just see an animal and kill it,” he says. “We exercise constant gratitude, make sure the animal doesn’t suffer, and we don’t waste. Hunting helps us learn about our environment and ourselves. I believe we become unhealthy when we separate from nature. That’s true for everyone.”