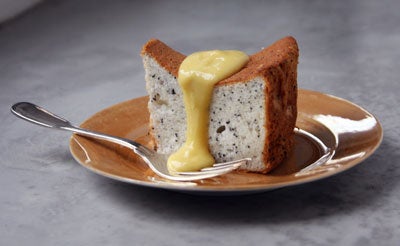 Depending on what recipes we’re testing in a given week, the refrigerator in the SAVEUR test kitchen is frequently stocked with quart containers filled to the brim with egg whites. Though perfectly suitable for any number of uses, the whites sometimes wind up in the trash before I’ve settled on a good use for them, because I try to think beyond such standards as angel food cake and meringue. While testing several recipes for an upcoming issue that rely heavily on egg yolk-thickened bechamel sauces, we again had a glut of extra egg whites. Normally, I’d contemplate for days or even weeks what to make with them, and they might go bad before I’d made up my indecisive mind. But with the surge of warm weather we had over a recent weekend in New York City, I actually felt like eating angel food cake. I knew the exact recipe I wanted to use, too.

Ever since I was turned on to Regan Daley’s In the Sweet Kitchen (Artisan, 2001), I’ve consulted it almost to a fault for recipes and inventive flavor combinations; I can safely say that those two features have made it my favorite baking book. In it is a recipe for poppy seed angel food cake with grapefruit curd that I’d dreamed of making from the moment I saw the mouthwatering photo. And what better occasion than the first burst of springtime warmth to enjoy a light dessert that also incorporates a tart curd made from a peak-season citrus fruit? The recipe calls for lots of poppy seeds, enough to actually flavor the cake, rather than just making it beautifully spotted. In the spirit of thrift, I soaked the seeds in 1/2 cup of leftover muscato wine because, well, we had too much of that, too.

The outcome had the nutty aroma of poppy seeds, complemented by the subtle sweetness of the muscato. Paired with the curd, it was a perfect mid-afternoon treat to inspire dreams of late-spring warmth while we’re still stuck in the last throes of winter.